In Silicon Valley—a place where binary code is practically a second language—art is sometimes a neglected part of a student’s education. But for Santa Clara’s Art and Art History Department, it’s the number one priority.

Each summer for the past four years, the Department has hosted a free, five-week Arts and Writing Intensive course for underserved high school students from Downtown College Preparatory. This year, they increased enrollment by adding students from Cristo Rey San Jose Jesuit High School.

Three days a week, a group of 34 students came to the Edward M. Dowd Art and Art History Building to practice ceramics, printmaking and writing. The classes were taught by Kelly Detweiler and Pancho Jiménez, co-heads of the outreach program, and Katherine Kain from the Art and Art History Department and Jeff Zorn and Maggie Levantoviskaya from the English Department. Jiménez emphasized the importance of exposing these students to the world of art.

“Students should have the experience of trying to break down and explore and practice how to communicate visually, purposefully,” Jiménez said. “That’s what we try to do in the arts—it’s not only craftsmanship, but it’s also communication.”

In addition to learning the nuances of creating art, the high schoolers also received advice from admissions counselors and Santa Clara students about applying to colleges. This intensive art and college prep enrichment was made possible by funding from the Hearst Foundation and the College of Arts and Sciences.

Detweiler and Jiménez assigned the students an art prompt that was very simple: find something you’re passionate about or an issue that’s current that you see happening. 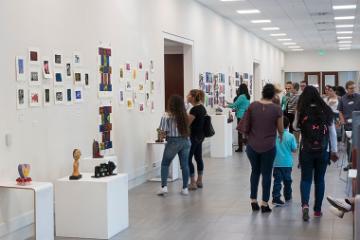 Five weeks later, that prompt has come to life. The first floor of the Dowd Building showcased all of the students’ work – most of which is ceramics and prints.

At the July 27th opening, families and friends of the students marveled at the exceptional work on display. Much of the art touched on familiar themes such as family, life and death, and social equality—just to name a few. Some of the works tackled more charged subjects like addiction, gun violence, and U.S.-Mexico relations.

“Ever since I was little, I loved to draw,” Ibarra said. “[This class] was something new for me—working with ceramics, lithographic printing. I really enjoyed it.” 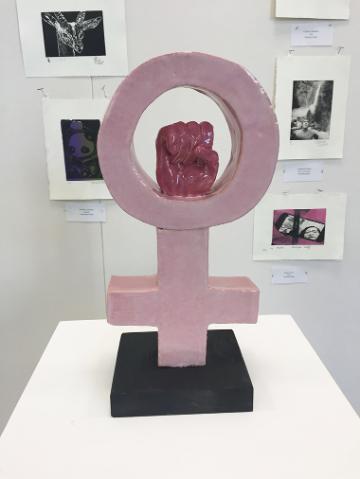 Another student, Chelsea Torres from Downtown College Prep, showed the intersectionality between race and gender with her piece Mujer Fuerte.

“I wanted to do something about empowering women’s rights,” Torres said. Her piece combined the Venus symbol with a raised fist.

In regards to the future of the program, Jiménez aims to not only increase enrollment to 50 students, but also incorporate more art forms—including dance, music, and even digital filmmaking.

But that will all come in due time.