Jessica Eastburn has a new mural on view at the SAP Center in San Jose, CA.

Jessica Eastburn has a new mural on view at the SAP Center in San Jose, CA. The murals are part of the Zoom Suites Mural Project at the SAP Center; a collaboration between the San Jose Sharks and Zoom. 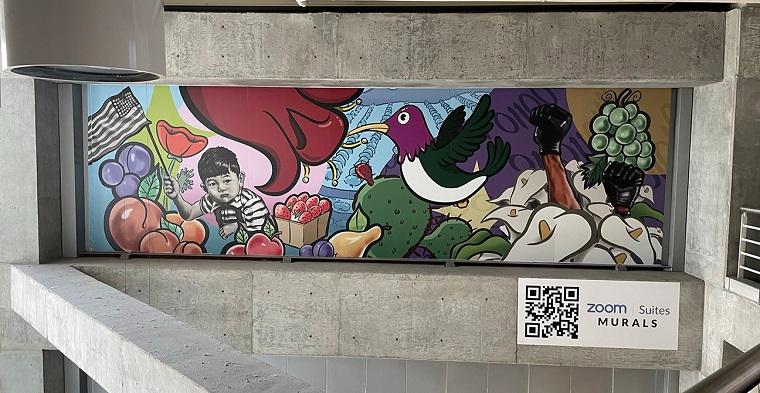 Six artists were commissioned by Local Color SJ to create unique murals inspired by the question: "What does San Jose mean to you?" Eastburn's mural titled, Cross-Pollination, celebrates some of the many cultures and industries that have helped to shape the city. A large hummingbird in the foreground represents the Ohlone people on whose unceded ancestral territory the city sits, a boy of Japanese descent waves an American flag in a tribute to the rebuilding of Japantown after Executive Order 9066 ended, and the outstretched arms of Olympians and SJSU alumni Tommy Smith and John Carlos rise out of a sea of calla lilies in celebration of the athletes' brave human rights protest at the 1968 Olympic Games. Industries past and present are represented in the mural as well. A variety of fruit dot the composition in a nod to the agricultural past of the city and the name SAN JOSE is spelled out in binary code in homage to the current designation as the heart of Silicon Valley.

More info on the mural project in Shark News.