As a research data analyst at the California Department of Public Health Thomas Hayashi (aka Tommy) ’20 (Environmental Studies, minor in Computer Science, M.S. ’21 in Information Systems) is using the whole breadth of his Santa Clara education to create predictive statistical models analyzing health burdens from wildfires and how they affect people with different racial/ethnic backgrounds, gender, age, and socioeconomic studies. As California is in the third year of a record-breaking drought and with another intense fire season looming, his work is becoming ever more important in understanding the effects of climate change on vulnerable populations. The maps he has created have been used in three publications, and he has built a public-facing interactive dashboard web application for the California Department of Public Health that displays health risks from wildfire smoke from 2008-2016. Tommy has presented the application and research findings a number of times for both internal and external stakeholder review. 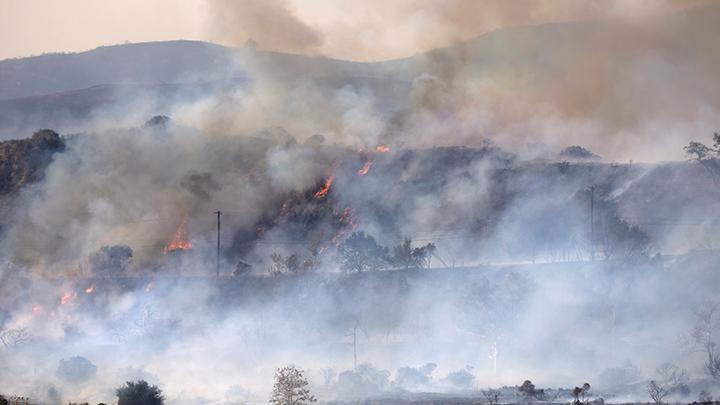 Even as an undergraduate, Tommy displayed a strong aptitude for data analysis and  research, coupled with an infectious passion for environmental protection. He is also a poster child for a quantitative Environmental Studies major. He recalls learning invaluable GIS, R, and biostatistics skills from Professors C.J. Gabbe (ENVS) and Brody Sandel (BIO). He also served as a peer educator to Professor Gabbe for Intermediate Spatial Analysis (ENVS 117). In addition, Tommy was a research assistant on two different projects using his environmental understanding and computing skills. With Professor Brody, he contributed statistical analysis to a peer reviewed publication on ‘Predicting intraspecific trait variation among California’s grasses’, on which he is a co-author. With Professor Stewart-Frey and the San Francisco Bay Bird Observatory, he built on his senior capstone thesis and analyzed correlations between climatic changes and bird populations in California - later turning this work into his Master’s Thesis, and presenting at the Ecological Society of America annual meeting.

Tommy credits his undergraduate research and teaching experiences as jump-starting his professional career in a field he is passionate about. Originally from the beautiful island of Maui, he has always felt connected to the outdoors, and has brought his technical and leadership skills to environmental protection. When he was not a research assistant indoors, Tommy was the apprentice garden manager at SCU’s Forge Garden and managed the organic certification process of the Forge garden, and conducted outdoor research on optimal plant growth using worm casting applications. Tommy writes that, "without the support, motivation, and teaching from SCU's ENVS department, I would not have had the skillset or mental fortitude to reach my current career status. I learned to assess research problems from all angles and understand both the environmental and human aspect of environmental issues. Furthermore, studying GIS, biostatistics, and actively conducting research for my degree directly enabled me to pursue my Master's degree and gave me the research experience to pursue a career as a research analyst, and hopefully scientist."