The U.S. Department of Agriculture estimates that twelve and a half million trees have died in the Sierra alone due to the current drought, with tree mortality rates increasing, in some cases doubling, from year to year. Keeping trees alive in such important areas as the Sierra is necessary not only for carbon sequestration and ecological reasons but also aesthetics. Who would want to see Yosemite if there were no trees? Okay, honestly I think that would still be one of the most beautiful places on Earth, but I digress. 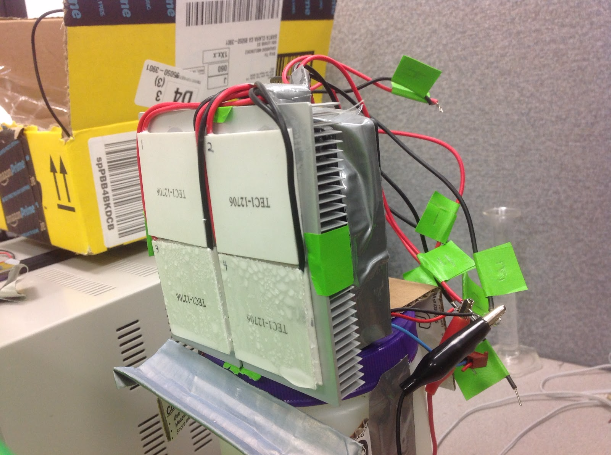 This summer, I joined a team of mechanical engineering students (Max Reese, Lalo Melendez and Andy Ly) tasked with designing and building a device that would capture water suspended in the air (humidity) and use it for irrigation in remote locations. In the Latimer Energy Lab on campus, we made our first model using a Peltier cooler (it uses semiconductors to make one side of a ceramic square hot and the other side cold when an electrical current is added) and...it actually worked! Within a few minutes of running, the cold side of the Peltier chip was covered in condensation and within an hour it began to drip off. We were making water from air! Alchemy! After weeks of iteration, however, we were able to obtain only 1.3 mL of water per hour in our best iteration. Given that our target was a liter per day, some significant rethinking was needed. Next we tried using desiccants, calcium chloride in our case. Within a couple weeks we were using these hydrophilic salts to gather water vapor from the air, re-evaporate it with sunlight, and collect the moisture in a makeshift solar still. On our final day of testing we collected ⅓ of a liter with only a 12-volt computer fan powered by a small solar panel. Given the low relative humidity here in sunny and dry California, we were very proud of our device’s efficiency. We hope to improve it further throughout the coming year and work toward its implementation in the field.