Katie Fitzgerald ’09: Producer of Plays and Dreams in Nicaragua

People living in shantytowns made of scrap metal and cardboard adjacent to the garbage dump where they forage for food amidst the muck.

Images. They can either haunt us or inspire us to take action—especially those that we capture with our own eyes, live and in person.

For Katie Fitzgerald ’09 (Theatre and Spanish), the image that stays with her is the one that gripped her heart when she traveled to Nicaragua as a high school student from St. Louis volunteering with an organization called Amigos for Christ.

She arrived to a village of people who had originally been displaced after Hurricane Mitch in 1998 and, for the next four years, had lived in precisely these conditions. But with the help of the organization, 125 of these families were able to relocate some 10 miles from this place. They moved to an open field that would eventually become Villa Catalina, a town small enough to miss detection on Google maps, but a place to call home, with clean air and water.

In her first role of helping to build the village school, Katie fell in love with the people, the sense of community, and the culture of true human connection being fostered so organically there. She gained so much from the experience that she went back during two more summers in high school.

By this point, the people of Nicaragua had a tight hold on her heart. But it was also time to start her college studies, so Katie accepted her place at Santa Clara, both as a way to continue to experience a Jesuit education and have the adventure of heading to California.

Katie immersed herself in theatre and Spanish classes with great gusto, but didn’t connect the dots as to how these two fields of study might be combined with her passion for the people of Nicaragua to become a career and a calling.

As she sat in a Social Justice and the Arts class one day, though, those dots lined up. After presentations from guest speakers from all over the world who came to share testimonials about how the arts changed people’s lives, she had the aha moment that would drive her right back to Villa Catalina.

Katie’s first step was to co-write a grant for funding from the Jesuit Community at Santa Clara. The money she received was to build a stage for the community to produce plays—a stage she would help build by hand with people from the community, with a base made of river rock that they collected themselves from the river’s edge.

An early obstacle was the reality that the rural Nicaraguans had limited knowledge of theatre, as people who were focused mainly on survival with little exposure to the arts or much time for anything beyond basic physical necessities. 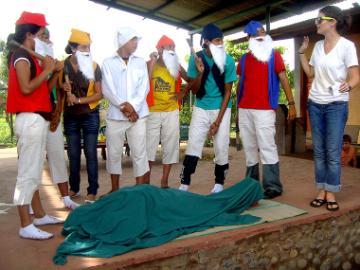 But that obstacle was no match for Katie’s enthusiasm and passion for dreaming big. She started small with a group of 12 young people who played theatre games and were eventually ready to tackle Snow White and the Seven Dwarfs.

“I have seen real poverty and suffering. In those environments, it isn’t always a priority to encourage kids to become whoever they want to be. But during their final bow after the performance, these kids had an incredible moment of pride in seeing their community applaud and give them a standing ovation,” Katie explains.

Katie admits that the natural first reaction is that theatre is about fun, but she sees it as so much more than that. “For kids who aren’t expected to go to school beyond sixth grade, it gets them involved and excited about learning. Theatre teaches them the life skills of teamwork, confidence, and leadership,” she adds.

Her goal is to eventually make the organization sustainable by leaving it in the capable hands of the Nicaraguans, but in the meantime she is happy to live there, work in the community she helped build, and raise funds to maintain it back at home in the U.S.

To that end, Katie extends an open invitation to the students, faculty, and alumni of Santa Clara to come spend time with her and her students. At this time, more than 50 people have taken her up on it, with most coming from the Theatre & Dance Department. The Santa Clara students work on production plans during winter quarter and then make the trip down during spring break to collaborate with the local students. All their work culminates in a big show on the stage she helped build with her own hands.

“I couldn’t do what I do without the education I had at Santa Clara, especially in regards to theatre and dance. Theatre became my home away from home—it really felt like a supportive family. The community service aspect that was woven into most every class grew me as a person and made me understand that whatever I was going to do, I wanted to be able to help people and serve the world.”

“The other thing about Santa Clara is that when I started dreaming about Teatro Catalina, my professors dreamed with me.”

“The other thing about Santa Clara is that when I started dreaming about Teatro Catalina, my professors dreamed with me,” Katie shares. “Many of my friends who attended other universities say their professors couldn’t pick them out of a lineup, but many of mine have become my friends.”

One of these former professors is Joanne Martin, who taught Katie costume design and stays connected by keeping Katie’s students in costumes and visiting whenever she can, with three trips so far.

When Katie explained that her students had few resources, Joanne loaded up large suitcases with fabric and paints, lighting equipment, sewing machines, and supplies so that they could create a show.

“We all had such an amazing time dancing, singing, and sharing experiences with the young people there that I went back twice after that to do two more productions,” Joanne says. “Katie is an amazing young woman who has made such a difference in so many young people's lives,” she adds.

Katie’s acting professor Aldo Billingslea feels just as strongly about Katie and her work. “What I discovered quickly about Katie was her willingness to be courageous to benefit someone else,” he reflects. “She would falter and avoid attention if it was mainly about her, however when the success of one of her peers relied upon her action, Katie would not hesitate. Katie's work in Nicaragua is just a larger manifestation of that same tendency. Katie's willingness to relocate to another country where she is the minority, where English is not frequently spoken, she lives among the poor and works among the poorer, and where she must stand in the spotlight and be an advocate for the disenfranchised is exactly what Katie has done, is doing, and will continue to do in the future!”

For information about contributing time or funding to Teatro Catalina, or to get in touch with Katie, please visit her website.