It’s always inspiring to see someone look back at a pivotal moment in their development and make the connection that what served as an early example to them is precisely what they are providing now for the next generation.

As a student at Santa Clara, Matt experienced firsthand the power of professors who could take his ambivalence about poetry and make it come to life. His mixed feelings came from enjoying the writing of poems while hating the old-school analysis of dead poets that he experienced in high school.

But when he came to Santa Clara and took 20th Century Poetry with Professor Edward Ingebretsen, S.J., everything changed.

“Professor Ingebretsen was like Robin Williams’s portrayal of John Keating in Dead Poets Society—he brought so much energy and passion to the subject that I was hooked,” Matt explains.

In Ingebretsen’s class, Matt took on the analysis of The Poetry of Robert Frost: The Collected Poems, Complete and Unabridged. He remembers filling the margins of every page with notes and, then, engaging with Ingebretsen in intense discussion about what Frost’s words said about the world around them. “This experience made me understand what it really is to get inside of poems, and it showed me what it is to love poetry," says Matt.

Fast-forward 26 years and Matt Mason is paying the favor forward for a new generation of reluctant poets and poetry students. 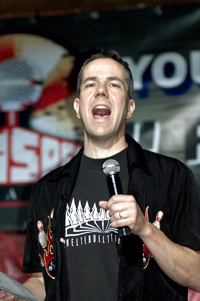 He is using his voice and his publishing credentials to inspire students through the non-profit organization he joined in 2009, the award-winning Nebraska Writers Collective. The credentials that led to his role as executive director come from his more than 200 publishing credits, including the publication of two books and two “chapbooks,” running poetry programs for the State Department in Romania, Botswana, Nepal, and Belarus, and being awarded a Pushcart Prize.

From his work abroad and his experience with the Collective, Matt has come to see that the fear and dread students feel towards poetry is universal. “In my workshops, I like to expose them to a wider range of poetry styles, including classic and modern examples, and give them the opportunity to write their own,” he explains.

The hook for his students is usually in the creating of their own work, which often culminates in slam poetry contests that help build excitement over the friendly competition.

According to Matt, “poetry helps people deal with the world at large and serves as an outlet to express emotions over events and circumstances they often feel helpless about. It allows them to express their anger, joy, loss, frustration, and longing.”

Matt also explains that by giving them an outlet for expression, his students make a difference to themselves, for sure, but by sharing their work publicly, they are also having an impact on the people who hear it. Whether by giving voice to a shared experience that they don’t feel comfortable expressing themselves or providing an intimate view of something they don’t already understand yet opens their mind to new perspectives, the sharing of poetry creates opportunities for human connection.

Matt started one such wave when working through the State Department teaching a writing workshop in Nepal. He remembers teaching a young woman who worked as a journalist to find her voice as a poet. “Her poems about the changes she wanted to see in Nepali society were so beautifully crafted and emotional that she made other people feel exactly how she was feeling,” Matt recalls.

After the young woman won the workshop’s poetry slam, she had the confidence to work with others in Nepal to start an organization called Word Warriors that travels throughout Nepal to affect change. “She is a brilliant, ambitious person who didn’t know what poetry could do until she participated in this embassy program and now she is implementing her knowledge full force, with several thousand members who have joined her, to give back and improve the lives of others,” he adds.

Back home in Omaha, Nebraska, Matt works with students to run a program called Louder than a Bomb, which allows them a powerful outlet to process heartbreaking events like the death of a parent or expand their thinking on topics like gender identity and racism.

In addition to the emotional benefits, Matt also sees how building an appreciation for the arts allows reluctant students to see an academic path that makes them want to go to college. “It is gratifying to see students’ lives open up through the program,” Matt explains.