Senior Jaime Daigle is a Natural-born Innovator, Creator, and Designer

College of Arts and Sciences senior Jaime Daigle is a natural-born innovator, creator, and designer.

Jaime is double-majoring in Studio Art and Individual Studies with a concentration in Design, Branding, and Innovation; she is also double-minoring in Art History and Arabic, Islamic, and Middle Eastern Studies. Within her vast range of study, Jaime made her primary focus marketing and studio art in order to develop the skills for what she ultimately wants: a career in design.

Jaime studied at the ELISAVA Barcelona School of Engineering and Design during the Fall quarter of her junior year, an experience that affirmed her decision to focus on a career in design. With encouragement from her professors, Jaime entered the Adobe Award Design Showcase in 2017 with “Detour BCN”: a water bottle designed with an eco-friendly route to explore Barcelona, which users can scratch off to mark places already visited. Competing with hundreds of other applicants, Jaime and her partner’s Detour BNC emerged as a semifinalist, winning her an Adobe Design Achievement Award certificate and online badge, access to Adobe Design Achievement Award career bootcamps, and feedback from professional judges. Impressive as it is, this award only begins to scratch the surface of Jaime’s success during her time at Santa Clara University.

On campus, Jaime is involved in the Santa Clara Student Art League, collaborates with a motivated team of designers contributing to the College of Arts and Sciences website, and is the Director of Graphic Design for SCU Own It, an annual networking summit dedicated to uniting and empowering women in the professional world. Jaime’s eyes light up as she describes her role at Own It, emphasizing the excitement in the cross-disciplinary nature of the job: She is able to use both her studio art skills and her illustration skills in a meaningful and exciting way.

Currently, Jaime works as Professor Aoki’s Faculty Student Research Assistant, specializing in marketing and design development on Aoki’s personal creative scholarship. Aoki describes Jaime as “talented, professional, and sunny”: “Jaime garners trust through her expertise and smart design sense. Her sense of humor, as well as her ability to listen to understand the desired communication nuances of the projects, are two successful aspects of her design/client relations skill set.”

As she wraps up her final year at SCU, Jaime is toying with the idea of heading to graduate school, maybe even in Europe. While she is open on the means to get there, Jaime eventually wants to start her own design agency. Fully freelance work does not appeal to her long-term, as she greatly values teamwork. Jaime diligently organized a spreadsheet of potential companies to work for, grad schools to attend, and fellowships to apply for.

Professor Aoki thoughts on Jaime’s future carry the strongest encouragements of SCU: “I believe Jaime will be successful as she moves forward with design work, no matter where she goes. I can imagine her joining or leading an international design group. Her work ethic and talent have already been recognized in the recent Adobe sponsored student competition.” 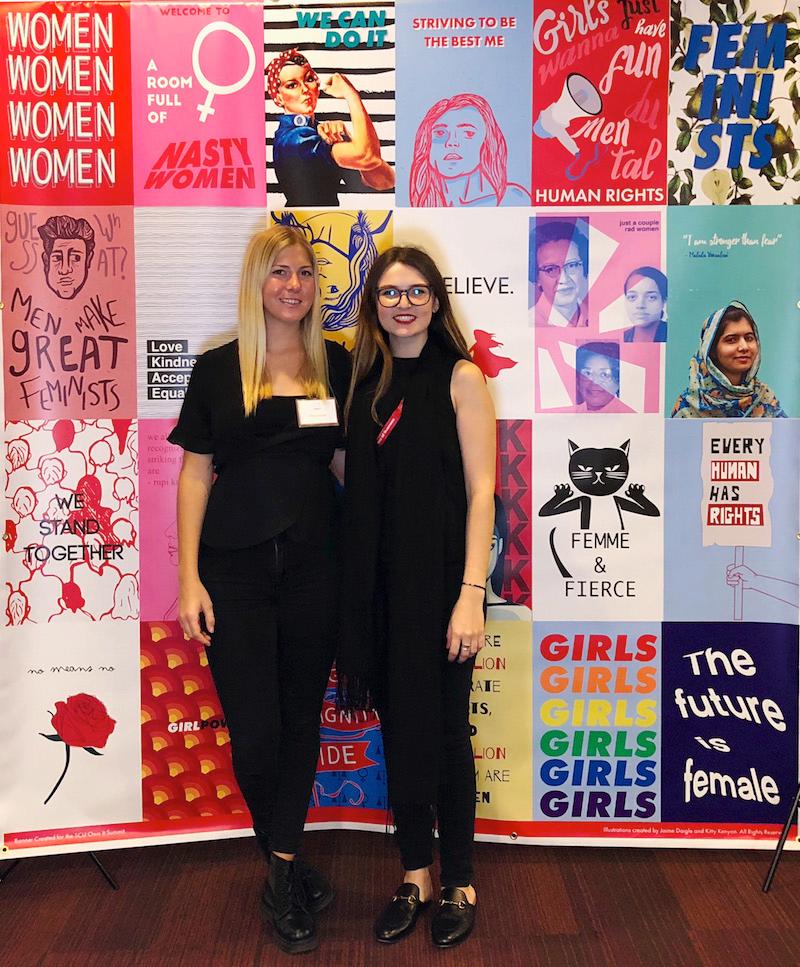 Jaime Daigle and Kitty Kenyon in front of the 2018 Own It conference mural.