“Every time my dad went back to campus, he would stop by the Mission Church and look over the names of all the graduates who died in WWII,” says Eichenberg. “He’d go down the list and know every soldier and where they died. He showed me that when you’re an ROTC cadet and take the oath of office, you’re truly making a solemn commitment.”

After graduating from the program and completing his M.S. in applied economics, Eichenberg reported for active duty at Hawaii’s famed Schofield Barracks in October 1977—the same filming location as the movie From Here To Eternity. Here he met his wife, Yvonne Kuwana, at a dinner at the Pearl Harbor Officers Club. One year later, the couple married at the post before relocating to Fort Polk, just outsideof Leesville, Louisiana.

After decades of dual civilian and military reserve careers, Eichenberg was recalled to active duty when his command came up for rotation in Iraq in 2005, requesting a job as director of the National Iraqi Assistance Center (NIAC), a walk-in humanitarian assistance facility with “30 dedicated Iraqis on staff, Sunnis, Shias, and Kurds, who all got along and risked their lives every day to come to work.” 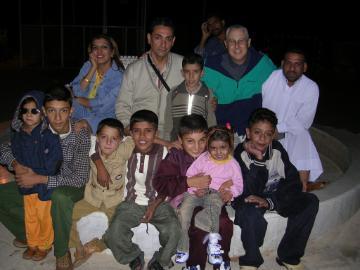 While director, Eichenberg oversaw support staff at the NIAC in addition to Kuwait City and the American Embassy in Amman, Jordan. “As a relatively small operation, we were at the lower end of thespectrum compared to the mega projects being run by the State Department and the United States Agency for International Development,” explains Eichenberg, “so what we did had immediate results.”

NIAC projects included directing the Baghdad Job Fair, locating missing persons, assisting battered women and children through safe houses and counseling, and providing sewing machines to help local women make and sell scarves at local bazars in Baghdad. The Center’s medical section assisted patients who had nowhere else to go outside of the NIAC.

“We worked with very dedicated organizations and were able to develop programs for heart surgery, plastic surgery for burn victims, and corneal transplants,” Eichenberg says. “We even had the largest prosthetics clinic in Iraq, which we ultimately turned over to the Iraqi Surgeon General.”

While based in Baghdad, Eichenberg got the idea to form an impromptu SCU Alumni Chapter, which included Lieutenant General Joseph Peterson ’72 and Special Agent Bob Gorini ’69, after running into the latter as he sported an SCU t-shirt during an early morning gym workout.

This year marks Eichenberg’s 40th class reunion year and Santa Clara’s 100th anniversary celebration of the national ROTC program, with many of his ROTC classmates who’ve just wrapped up careers at the Pentagon planning to attend. “It will be amazing to see people you lived with in the dorms 40 years ago,” he says. “I haven’t been back to campus in so long, but to me, Santa Clara has become one of the prettiest campuses in the nation.”