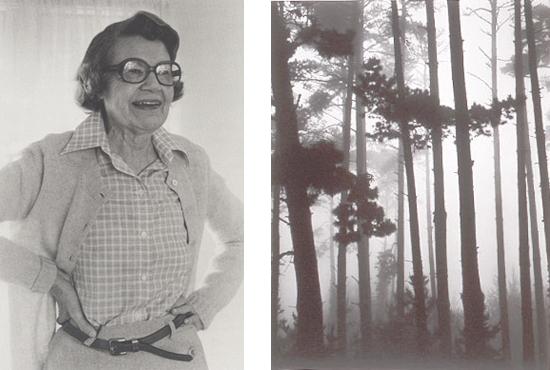 A portrait of Helen Johnston alongside Untitled (Forest in Fog) (1962), a photograph by Brett Weston that is part of the bequest.

The de Saisset Museum's collection of photography includes the Focus Gallery Collection, a selection of 220 photographs from the Estate of Helen Johnston. Upon her death in 1989, Johnston left her private collection of photography to the de Saisset Museum, the Oakland Museum of California, and the San Francisco Museum of Modern Art. Photographers represented in the collection include Ansel Adams, Ruth Bernhard, Wynn Bullock, Imogen Cunningham, Judy Dater, Paul Strand, Jerry Uelsmann, and Edward Weston.

Johnston founded the Focus Gallery on Union Street in San Francisco in 1966. She had previously worked as the public relations director for the de Young Museum, and in this position, she noted that photography exhibitions at the de Young were drawing the largest audiences. Photography was not widely recognized as an art form at the time, however Johnston's vision for Focus Gallery was to be a "people's gallery." She provided an exhibition space that made it possible for established and emerging photographers to reach a wide audience.

In the nineteen years Focus Gallery was open, Johnston mounted more than 300 exhibitions with work by more than 500 photographers. With a handful of exceptions, Johnston had a policy of never featuring an artist more than once. She held retrospectives of well-known photographers, showed works from the early history of photography, and promoted the work of lesser-known artists, with a focus on Northern California and the Bay Area. It was from these exhibitions that Johnston built her own collection, one third of which is held in the permanent collection of the de Saisset Museum today.

Focus Gallery was the first West Coast gallery devoted to photography as a fine art, and at the time of its closure in 1985, it was the longest continuously operated photography gallery. Johnston's pioneering efforts in showcasing American photographers, particularly the Northern California masters, was instrumental in advancing public acceptance of photography among the arts.