Nou se Ayiti: We Are Haiti

The Strength of a Community Voice to Overcome Human Rights Abuses

I never really made a decision to go to Haiti. In Some ways, it feels like Haiti found me.

There was an idea to go, a desire to go, and then a confirmation e-mail affirming plane flights had been booked. I think that’s part of the reason I was nervous. That, and the U.S. State Department website discouraging travel to Haiti.

Last March, Santa Clara Law Professor Cynthia Mertens sent an e-mail to all of her students who traveled with her to El Salvador encouraging us to meet Mario Joseph, the winner of the Alexander Prize. More than anything, I went to support Cynthia. While walking over to hear Mario speak, I saw my friend Daniel Zazueta and asked him to come along. He agreed and that moment changed both our lives. 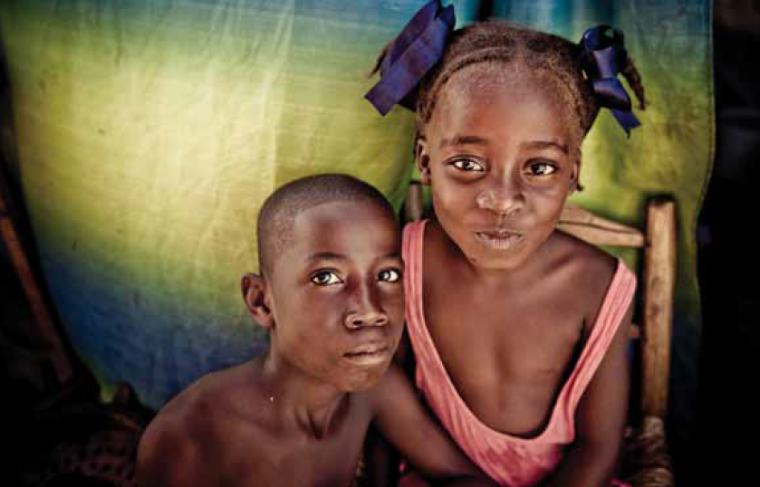 Mario told us the story of Marie Jean Jeanne and her community of Raboteau, a small town on the west coast of Haiti. Approximately 40 people were murdered in an attempt by the paramilitary group FRAPH (Front for the Advancement and Progress of Haiti) to suppress pro-Aristide demonstrations in Raboteau. The protests called for the return of Jean-Bertrand Aristide, Haiti’s first democratically elected president. Aristide won the election by a landslide in 1990. Within seven months of his presidency, a military coup removed him from power.

On April 22, 1994, at around 3 a.m., Marie was home with her husband and young children when the paramilitary men began pulling people out of their homes in Raboteau and beating them in the street. Marie’s husband ran out the back door to join dozens trying to escape the violence by swimming out to sea toward fishing boats. But the men in the boats weren’t fishermen; they were paramilitary who were waiting with guns. They shot into the water. The body of Marie Jeanne’s husband was found in a fishing net three days later.

After an internationally acclaimed trial in Haiti in 2000, where many of the military officers responsible for the massacre were tried and convicted, Marie Jeanne served as the lead plaintiff in a subsequent lawsuit filed in the United States against one of the officers, Col. Carl Dorelien.

Dorelien had fled to the United States in 1997 to escape prosecution and subsequently won $3 million in the Florida state lottery. The Center for Justice and Accountability, an international human rights organization, filed suit against Dorelien. A Florida court ultimately awarded Marie Jeanne $430,000. Instead of keeping the money for herself, Marie Jeanne spread the settlement award among the victims in her community.

Daniel, Cynthia, and I applied for and were awarded a Bannan Grant through the Ignatian Center for Jesuit Education at SCU. Through that process we manifested our intentions to tell this remarkable story. The idea was to go to Haiti to tell a story of community. We wanted to find a story of justice and the success of “the rule of law.” What we found was different and bigger than we could have ever imagined.

This is the part where I wish I were a poet. Haiti is too big, too much to even describe. Haiti is intensely poor, yet intensely proud. Haiti has a rich history and enduring spirit. Haiti is music, and art, and a dance that is so slow that it looks like breathing. Haiti is so broken, yet so beautiful. Haiti is pollution and trash, but the bluest water you’ve ever seen. Haiti is unlikely friendships and sacrifice. Haiti is humanity.

We didn’t find a story of justice waiting for us in Raboteau. There was only the aftermath of devastating hurricanes. There is no translation for “the rule of law” in Creole. There is only survival. We left Haiti wondering how we could get people to pay attention to the exigent need permeating the country, and, unfortunately, our answer came in the form of a devastating earthquake.

Four days after our return to the United States, I stood in the rain upon hearing the news. I was waiting for Daniel to come tell me what to do. I remember thinking about how dark it must have been. There were already so few streetlights in Port-au-Prince and the earthquake hit not much more than an hour before dark. I thought about all the friends we had made. Images and sounds were still so fresh in my mind. But more than anything, I felt ashamed. I was embarrassed that I had been nervous to go to Haiti. I felt unworthy of the love I experienced from a place that had nothing else to give.

I don’t think Daniel and I ever really made a decision to return to Haiti after the earthquake, we just knew we would. There was a piece of each of us there, and our research paper now couldn’t be complete without a post-earthquake perspective.

The Santa Clara community rallied around us to help with our return. We received donations from students, professors, the Ignatian Center, and the Jesuit community on campus. During our spring break in 2010, we flew to Santo Domingo and then bused to Port-au- Prince with three 50-pound boxes of goods, donated funds, and heavy hearts in tow.

At the bus stop in Port-au-Prince we climbed into a taxi to head to our Haitian home, Matthew 25, a guesthouse started by a parish twinning program, that had become a tent city. The taxi driver brought along an English- speaking friend who sat in the front passenger seat. The English speaker, Jude, asked us if we thought Haiti would be different after the earthquake. Daniel smiled and said, “Well, life goes on, doesn’t it?” Jude said, “For some, but not for others. I lost my wife, my home, and now I sleep in the streets.”

When we made it safely inside the gates of Matthew 25, we set up our tent in the backyard. On our first trip, our room had been located on the roof of Matthew 25, but that part of the structure had not survived the quake. We quietly sat on the roof, marveling at the place where we had once slept, and looking at the tops of hundreds of tents in the adjacent field.

During our short second trip, we went through an array of emotions. Once we dropped off the practical supplies and money we intended to bring to our friends, we worried about being in the way. But that feeling quickly evaporated as we set to work. We cleaned storage rooms that had been destroyed in the quake, revealing much-needed food and supplies. We even volunteered in the tent-city clinic, learning how to take blood pressures.

Our final day, our host and friend Sister Mary drove us around the heart of Port-au- Prince before taking us back to the bus stop. Things were worse outside the Matthew 25 community. It was seven weeks after the earthquake, but it looked as though the disaster had just happened. There was no organization.

People just stood in the streets, seemingly waiting for someone to tell them what to do. Almost every building seemed to have some level of destruction. Some buildings looked as though they had gone soft and started to sag. Some looked flattened. And then in some places, there were piles of rubble so fine, they looked like piles of ash.

Our first trip was so academic—full of talking and learning. Our second trip contained fewer words, but more love and heartache.

This summer, while studying for the California Bar Exam, Daniel and I finally finished the first draft of our paper. It is a culmination of all we learned in Haiti. We intended to write a story of justice and victory for the victims of Raboteau. But what does justice look like in a place where there isn’t enough food, resources, or infrastructure for its people? Our paper explores that question through the lens of the Raboteau massacre.

If we are Haiti, it is the best part of ourselves. It is our compassion, our complexity, and our will to survive. But it is the generosity of the Santa Clara community that allows us to tell the story of the people who live and struggle there, every day.