Santa Clara Students Perform Shakespeare For and With Inmates

“The most dangerous creation of any society is the man who has nothing to lose.”

While Santa Clara has long sought to stimulate the moral imagination of its students by direct contact with the poor and marginalized, our programs have often overlooked an important and steadily increasing segment of society—the inmate population. While serving out their sentences, prisoners lack mental stimulation. Subject to boredom and isolation, they often despair, both at their situation within the prison and the daily evidence they see that the world outside cares little or nothing for them. These inmates know that most people outside the prison gates will avert their eyes and bracket these souls from inclusion in the human family. As Kant reminds us, “It is ... a duty not to avoid the places where the poor who lack the most basic necessities are to be found but rather to seek them out, and not to shun sick-rooms or debtors’ prisons and so forth in order to avoid sharing painful feelings one may not be able to resist.”

THE GENESIS OF THE PROGRAM

The idea of performing Shakespeare at San Quentin began in 2004. I was playing the title role in Othello at the Marin Shakespeare Company. Jonathan Gonzalez, who is director of education at the company, was playing Roderigo. One day, he talked with me and Paul Sulzman who was playing Iago, about ways in which we could reach out to students.

“I go into the prison, and I teach this Shakespeare class to these guys,” said Jonathan, “and I think they may be ready to perform a little and maybe do some monologues. I think it would be great if you guys could come in with me and you could see them.” I said, “Well, if we could perform along with your students it would be even better.” And Jonathan said, “Great! We could do that.” The rest is history.

I applied for and received two successive grants for the Shakespeare at San Quentin project from Santa Clara University. The first grant was received in 2005 from the office of the Dean of Arts and Sciences, and the second in 2006 from the Ignatian Center’s Bannan Institute. These grants helped Santa Clara students to connect with prisoners and assist San Quentin State Prison in achieving its mission to assist those incarcerated “in achieving successful reintegration into society,” by reminding them that there are people out there who are concerned about their well-being.

THE IMPLEMENTATION OF THE PROGRAM

In the summer of 2005 the small pilot program funded one visit to San Quentin, during which students had a brief rehearsal with the inmate performers followed the same evening by a performance before an audience of inmates. This project showed how incredibly grateful the prison population was simply to have SCU students there. Their appreciation for the work and the impact of their thankfulness was overwhelming for our students. The inmates brought themselves to the theatrical encounter in ways that were startling, amusing, joyous, and above all, irresistibly human.

For the students, the experience of attaining a level of theatrical solidarity with these men was a unique and powerful event, one that everyone felt was invaluable. Danielle Zent ‘05 was so moved by the experience that she has included it in her grad school application. “That experience,” she said, “helped me figure out where I wanted to go with my education. I plan to major in forensic psychology so that I can work with people caught up in the criminal justice system.”

In the summer of 2006 the grant from the Bannan Institute funded two visits to the prison, one rehearsal and one performance the following week. The visits were part of an SCU summer-session class, which fulfilled a Fine Arts requirement. It was listed as both upper and lower division. Upper-division students were required to perform several monologues, sonnets, and an additional scene. Lower-division students had no prerequisite and were required to perform one monologue and one scene. The planned San Quentin visits were optional. All but two students were able to attend. I prepared the students by introducing scansion and meter, and assigning Constantin Stanislavski’s Method of Physical Actions and Scott Kaiser’s Mastering Shakespeare.

The plan included a concurrent but distinct course for the inmates at San Quentin, to be taught by Gonzalez. He knew that he needed to meet often with the inmates in order to empower them with the confidence to perform for their peers. While the Marin Shakespeare Company was supportive of the endeavor, it could not afford to underwrite Gonzalez’s time, so a vital part of the grant was a stipend to cover his work with the inmates. Thanks to the grant, Gonzalez was able to meet with the inmates over a period of several months.

The success of the project was tied to the ability to bring the San Quentin students together with those at SCU. Gonzalez utilized his “Brown Card,” which allows him to bring up to twenty guests for an event at the prison, to gather the inmates and students together on two occasions, once for rehearsal and once for the final performance before an audience of inmates. 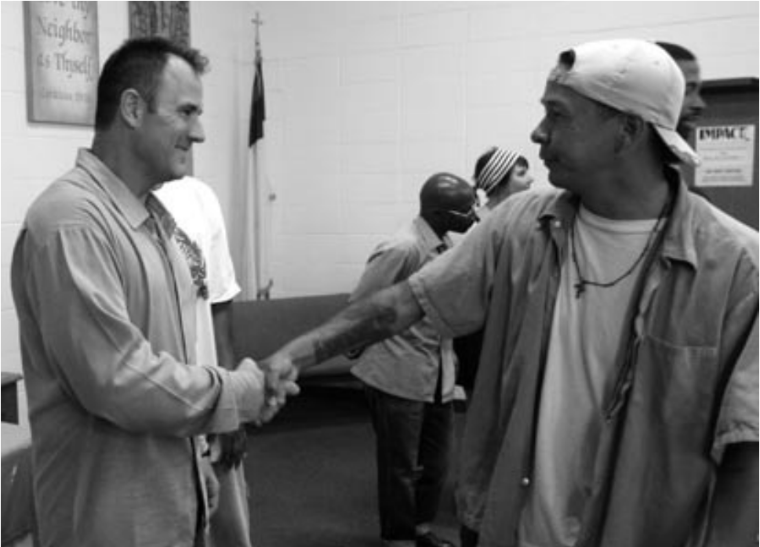 THE PERFORMANCE AND ITS IMPACT

The vulnerability was apparent in every scene. Michael Willis covered his face but could not hold back the tears as he finished a powerful scene from Act II of As You Like It.

“Shakespeare made me take a look at myself,” the 44-year old convicted burglar said later. “He was very conscious of human nature, of fear, of jealousy, things we all deal with. The more you read Shakespeare, the more you identify with Shakespeare.”

Louis Branch was also moved by Sonnet 30, which he performed with a command strikingly similar to that of actor Samuel L. Jackson. “Prisoners wake up at 3 a.m. and wonder what they’ve done with their lives,” said Branch, 59, who was first imprisoned in 1968, for kidnapping and robbery. “They think about loves lost and times wasted, friends who have died. That’s all in Sonnet 30. I relate it to my own life.”

Inmates in our society are the epitome of those who, because of their actions, are prevented from fulfilling their divine purpose of full integration due to an oppressive system. I believe this class enabled the students to warm to the idea of connecting with individuals from the grittiest of realities.

The inmates were grateful that we were there, even before we had spoken a word. By the fact that we had come, we were saying “We acknowledge that you exist. We haven’t forgotten you.” That in itself was a huge statement to the inmates. And for them to see other people, young people, doing the same thing, was something they appreciated, too.

Reporting for the Marin Independent Journal, Paul Liberatore captured these comments from the SCU student participants:

“I was scared,” confessed 18-year-old Katie Fier, a tiny, outdoorsy-looking woman from Colorado. “I was out of my comfort zone.”

Calvin Johnson, a tall 19-year-old in a crisp white T-shirt, said softly: “After watching all those prison shows on TV, I didn’t know what to expect. When we first came in, I was very nervous and scared. They’re in here for a reason, you know. But you can’t really know what they’re like until you meet them. I found that there’s good in all of them.”

Students kept journals throughout the entire process. This was an excellent way for them to both reflect and decompress from what turned out to be an emotionally overwhelming experience.

The journal entries were moving and inspiring. “I want to do more of this,” wrote one student. “Is there a way to do this in the county prisons?” Three students wrote, “I know someone who is in prison.” One wrote, “I have a close family friend in prison. I would go and visit him and it meant the world to him that I was doing that. And that is one of the reasons why I am interested in this.”

Some students worked to find words to express their feelings. The journals were a great record of this, too, as they revealed the struggle of writing down a thought one way, then scratching words out, and trying again, looking for the right words, any words, to capture the power of the experience. 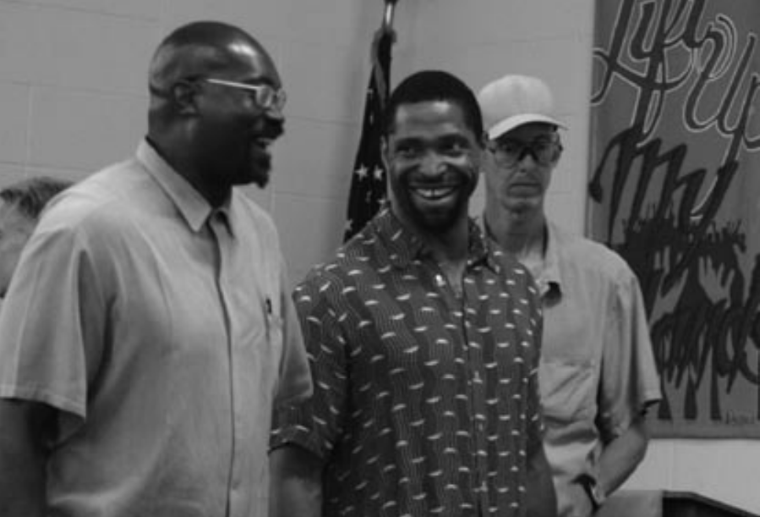 THE FUTURE OF THE PROGRAM

Should we continue this work? Yes. For me, reinforcement came that first summer via a touching recital of Shakespeare’s Sonnet 29. The inmate began, “Somebody else was supposed to read this, but cannot be here tonight. I want to do that one because I think it speaks to us.”

When, in disgrace with fortune and men’s eyes, I all alone beweep my outcast state And trouble deaf heaven with my bootless cries And look upon myself and curse my fate, Wishing me like to one more rich in hope, Featured like him, like him with friends possess’d, Desiring this man’s art and that man’s scope, With what I most enjoy contented least; Yet in these thoughts myself almost despising, Haply I think on thee, and then my state, Like to the lark at break of day arising From sullen earth, sings hymns at heaven’s gate; For thy sweet love remember’d such wealth brings That then I scorn to change my state with kings.

This recitation particularly touched me because one of my heroes, Carl Upchurch, says that this is the sonnet that transformed his life when he was in prison.

I have seen these prisoners struggle with thoughts such as “I am in disgrace with other people. I’ve done this act that has been found disgraceful. And now what do I do?” I wonder, “Can there be redemption in this for them?”

As I explore where Shakespeare’s words intersect with these men’s lives, I see connections that could have a powerful impact. It is my hope that we can help these men and in the process shape our own students’ lives.