When I first arrived in the Peruvian altiplano as a Maryknoll Missioner 15 years ago, I was struck by the presence of a beautifully engineered system of irrigation canals extending through several communities. Engineers love to solve problems, and seeing progress like this in a very poor region of mostly subsistence farming was encouraging…until I learned that it had never delivered a drop of water, and probably never would. The design of the system had been done by outsiders unfamiliar with the intricacies of farming in the harsh, high-elevation climate, completely unaware of the unique form of land ownership. As a water resources engineer, I began my journey of reflection on the role of engineers in serving the poor in less developed areas.

Peter Gleick, a leading global authority on water, has stated, “The failure to provide safe drinking water and adequate sanitation services to all people is perhaps the greatest development failure of the twentieth century.” In the late 1970s, when over 1.4 billion people lacked access to clean drinking water, the United Nations declared the International Drinking Water Supply and Sanitation Decade (1981-1990), with the goal of providing safe drinking water for all people by 1991. Despite laudable efforts during the past 25 years, about 1.1 billion people still lack this basic necessity, leading to the recent U.N. declaration of 2005 to 2015 as the International Decade for Action—Water for Life. This time the goals are more modest but still ambitious: to embrace the millennium development goal of halving, by 2015, the proportion of people who are unable to reach or afford safe drinking water, and who do not have access to basic sanitation.

Engineers receive intensive training in a number of the skills necessary to solve water problems. These devastating statistics provide motivation for many of them to work to address this basic injustice. The marriage of great technical skill and intense care for the promotion of the dignity of the human person constitutes the heart and soul of the Santa Clara University ethic. This ethic inspires many engineering senior design projects at Santa Clara University; these year-long projects provide students with an opportunity to integrate their diverse coursework into a larger, comprehensive effort. An excellent example of such a senior design project is that of two recent SCU civil engineering seniors, Steffany Castro and Edward Reyes. They chose to work with the sustainable technology of a gravity-fed water system design capable of supplying clean drinking water with no outside energy. I was pleased to be their advisor.

We were fortunate to connect with a small non-profit group, Agua para la Vida (AplV, www.aplv.org) which has designed and built such systems in Nicaragua for more than 20 years. Recognizing the advantage of drawing on this wealth of experience, we offered to help with some of their work, and they introduced us to a project in the central Nicaraguan community of Liquia Los Olivos. Liquia consists of about 100 people in 16 houses and sits in a rugged landscape where subsistence farming and small-scale ranching are the main economic activities. To obtain water, women carry buckets from a stream to their houses at distances of up to half a mile. The stream is contaminated by its use for bathing and clothes washing, and the presence of animals further dirties the water, making it unsuitable as a potable water source.

In 2006, AplV began working with Liquia to help them secure a cleaner and more reliable water supply. However, technical problems led to the project’s being stopped, and a redesign was begun. Steffany and Edward chose to help AplV by redesigning this water system using two different techniques to look for improved design methods. The Bannan Institute generously provided support for Steffany, Edward, and an interdisciplinary group of faculty and students to travel to Nicaragua, to meet with AplV staff, and to visit Liquia. The objective of the trip was to provide the participants with an opportunity to learn about sustainability and water development in an international context and to place the practical engineering task of designing a rural water supply system into the broader context required for assuring a sustainable system.

We left early on March 23, 2008, and because of airline delays so typical when traveling to a developing country, arrived 48 hours later. Our first tangible contribution to clean water development in Nicaragua was 350 pounds of brass faucets from the U.S., neatly packed into small packages to meet airline baggage limits. High quality faucets are difficult to obtain in Nicaragua, and these hand-delivered ones will be used by AplV for many future projects.

Once on the ground in the capital of Managua, we jumped into the back of a Jeep, and then caught up to a bus that we boarded for Rio Blanco, the small city in the center of Nicaragua that served as our base for the week. AplV has its main office in Rio Blanco, and operates a technical school there to train Nicaraguans in techniques of water development, from hydraulic design to construction. The dozen students at the technical school come from all over Nicaragua, and since they invariably come from very poor communities, they pay no tuition. Further, AplV supports them all with housing, food, and a small stipend. The school occupies one building, with a central classroom, shared dormitory rooms, a kitchen, and a small office for Gilles, a volunteer from France who is the instructor. When we visited the school, the students were most interested in hearing from the SCU students about what their studies were like. Our students recognized the equations on the blackboard as the same ones they had used in their hydraulics classes at SCU a few quarters earlier.

The AplV technical school is an excellent example of how an organization can evolve in response to lived experience. By providing education at their institute, and by conferring on graduates a state-recognized “water technician” certificate, AplV helps to promote sustainable water development efforts (by developing local expertise) while it combats poverty by providing an education that qualifies students for employment after graduation. As a matter of fact, most AplV project design is now done by graduates of their program: a model for sustainability!

From Rio Blanco we traveled an hour in an old Jeep and spent another hour hiking through thorny brush to reach Liquia. Finally, we could see the location of the project that Steffany and Edward had been working with only on paper. As we reached the small spring on a hillside that is the water source for the new system, we learned that AplV works with the community to promote watershed management, providing for long-term water quality protection. They help to establish nurseries, with seedlings planted above the spring to prevent erosion. They also fence off the area up-slope of the spring, to prevent contamination from cattle waste. This process sometimes requires purchasing land, or developing a land use agreement, replacing cattle ranching with forestry.

A gravity-driven water system relies on tapping a water source higher than the delivery points. From our vantage point at the spring, we could see nearly all the houses in the community, and they were almost all on a level with each other. Not only that, but the pipe from the main storage tank (at the spring) would need to cross over a river to reach the first house to be served. This would require building a small suspension bridge. We walked along the pipeline route, manually excavated by community members through rocks and clay to a depth of three feet. As we approached the first house, there was a meeting underway. When we arrived, the tension was palpable. Apparently, a “minor” error in surveying led to insufficient pressure in the system. The water could not be delivered! This error cost community members hundreds of hours of intense labor. The redesign, now under construction, worked as far as the first house, but the community was discouraged. They had invested much more effort than they had initially expected or planned for. However, encouraged by a working faucet at this first house, there was hope, and construction continued. It took more than two years to go from the initial surveys for the water project to the completion of construction (in July 2008). This provided a valuable lesson. It takes time to engage a community and organize their efforts before, during, and after construction to ensure a successful water project.

This trip was motivated largely by engineering concerns: there was a clear problem, and a good engineer could fix it. What we learned was that, while technical design is essential, sustainable water development entails much more: engaging with the community, protecting the environment, and ensuring the long-term sustainable operation of the system. Nor does an engineering project end after the last of the concrete is poured. Community health promoters need to document improvements in human health, the ultimate purpose of water supply projects. This broadened perspective will inform our future work, as we temper our enthusiasm for technical solutions with our understanding that they provide only one piece of the complex puzzle of sustainable development. 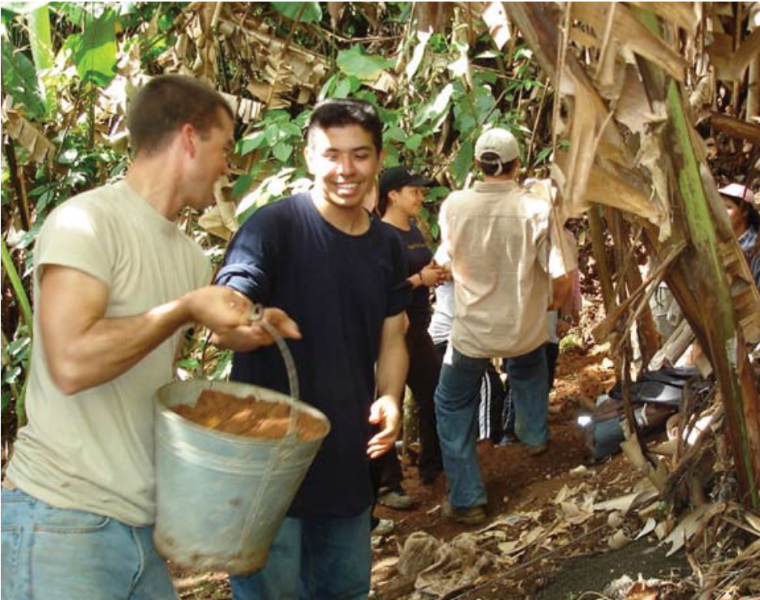