Sister Ana Maria Pineda, RSM, was elected to the leadership team of her religious community of the Sisters of Mercy on July 1, 2018.  Currently on academic leave, she continues to receive invitations to share her work on Archbishop Óscar Romero, Jesuit Rutilio Grande and the martyrs of El Salvador.

Over the past few months, Pineda has given several presentations based on her book, “Romero and Grande: Companions on the Journey,” including at the care center for retired Sisters of Mercy in Omaha, and to a social justice class at the College of Saint Mary, also in Omaha.  At the end of June 2019, she participated in a conference at Notre Dame University in Indiana titled, "Mystic and Mystagogue: Preaching as Spiritual Leadership" with her presentation on “Romero and the Word.”  On Dec. 7, she will be a featured speaker at the Leadership Conference of Women Religious Nebraska Gathering, where she will share her personal story of emigrating from El Salvador to the United States at a young age and, of course, her works about Romero and Grande. 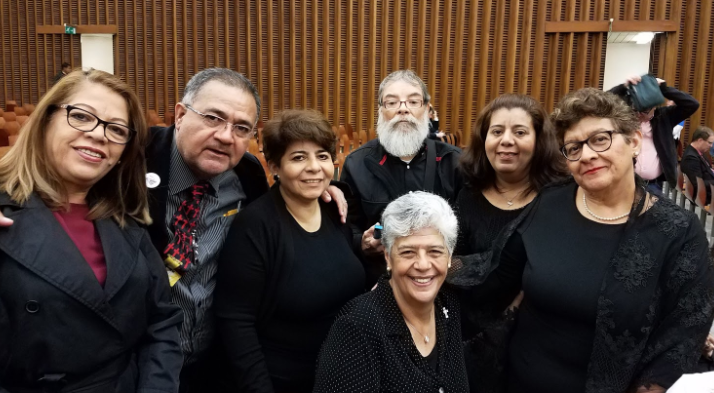 Sister Ana María Pineda, RSM with the nieces and nephews of Saint Óscar Romero following the canonization ceremony in Rome.

Pineda was acknowledged as the founding director of the Óscar Romero Scholars Program during its 25th-anniversary celebration held Nov. 2 at Catholic Theological Union (CTU) in Chicago. As part of the evening, the current director, Marco Lopéz, presented the Romero Award to Congressman Jesús Garcia of Chicago. Garcia was honored for his contributions to the Hispanic community with a citation, a plaque and a signed copy of “Romero and Grande: Companions on the Journey,” authored by Pineda. The scholars' program was founded in 1994 during her 10-year tenure at CTU where she was a faculty member and director of the Hispanic Ministry Program. A collaborative effort with the Archdiocese of Chicago, the Óscar Romero Scholars Program prepares lay Hispanic/Latina women and men for professional ministry.

In early November, at the invitation of Commonweal, Pineda launched their new Hispanic initiative delivering its keynote address at Loyola Marymount in Los Angeles.  She addressed the life and legacy of slain Archbishop of El Salvador, “Romero: A Man in Search of God and Truth.” She offered a reminder of how Romero lived and of how long the people of El Salvador have been struggling for human rights and justice in their country.

Lastly, Pineda was interviewed by Catholic News Service (CNS).  The CNS story, which ran in The Compass, Franciscan Media, and three other media outlets, was about the lasting impact of the murders 30 years ago of Jesuit UCA leaders and others seeking peace in El Salvador. Interest in Romero continues since he was named a saint of El Salvador and the Universal Church in October 2018.