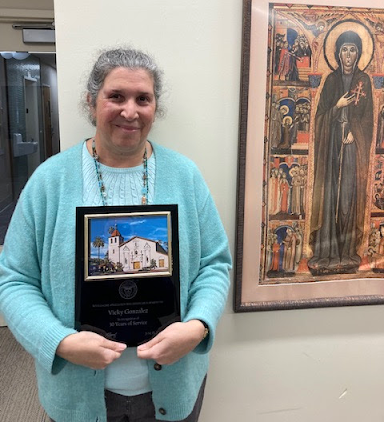 The year 2021 marks a milestone for RS Department Manager, Vicky Gonzalez. She has now worked at SCU for 30 years. She spent her first 7 years on campus working at the Graduate Department of Counseling Psychology and Education. She initially worked with the Dean/Faculty of CP&E, then with Records/Admissions. Then she moved on to the Religious Studies Department in the summer of 1998, and hasn’t left!

Vicky was hired by Denise Carmody, who was RS Chair in July 1998. After working on the 2nd floor of Bannan Hall for 7 years, she moved upstairs to the 3rd floor and spent the next 10 years there, until the whole RS department moved to the 3rd floor of Kenna Hall. The uprooting of the large number of faculty from Bannan and the Old Mission House on Franklin Street (where some RS faculty worked due to lack of space at Bannan) was a large accomplishment, which took several months. 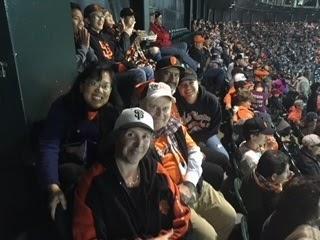 After Denise moved on to become SCU Provost, Vicky worked with 5 other department chairs: Catherine Bell, Paul Crowley, SJ, Gary Macy, David Gray, and now with interim Chair, Boo Riley. She has seen 23 years worth of faculty move in and out of the department,  RS Majors/Minors declare and graduate, and has supervised several dozens of student assistants throughout these years, including many who were RS students. One RS Major (Pearl Barros) even became an RS Faculty member several years later…..during Vicky’s time at the department! 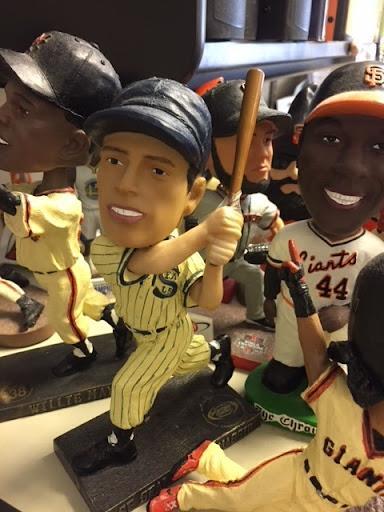 Vicky has been the proud Giants group leader since 2000, when the team moved to what’s now known as Oracle Park. She has organized annual trips of RS faculty, students, and staff from other SCU departments to see the SF Giants, with the exception of the past couple years due to the pandemic. She looks forward to more games in the future. She has several souvenirs from the many games attended, including her collection of bobbleheads, which are seen by any visitors to her office.

She has witnessed many changes on campus over the years, including the razing of old Bannan buildings for the new STEM complex, but is glad to be where she is at the Religious Studies Department. It has been a great 30 years!