You Can Touch the Art!?

Bay Area artist Stephanie Metz is preparing for a solo exhibition at the de Saisset Museum. In this interview, learn about the new artworks being created for this exciting, interactive exhibition. [Published August 29, 2018]

Bay Area artist Stephanie Metz will be featured in a solo exhibition opening at the de Saisset Museum in January 2020: The InTouch Project. Metz’s primary mediums are wool and felt, and she utilizes them to create human- and animal-like figures. For the  InTouch Project she is creating new work that pushes the scale and interactive potential of her work.

For the InTouch Project, Metz has conceived three components, or bodies of work, that will accomplish different points of interaction for visitors:

The Hanging Pods are organic, abstracted forms, not unlike cocoons in appearance. They are made of stitched, stuffed industrial felt covered in white felted wool. They will be hanging from the ceiling of one of the galleries in a cluster that audiences can walk amongst. Visitors can touch them, squeeze them, feel that they have different densities and shapes. This grouping will be in Gallery II, in a darkened, meditative space. 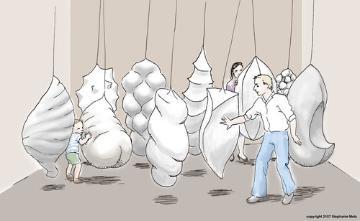 And then there are Holdables, created in stitched industrial felt. From afar these forms will look like rock or concrete, but they are actually lightweight and soft. The shapes will be a bit more geometric and suggestive of all sorts of things, and they will vary in size from handheld to furniture-scale. The Holdables will be installed in Gallery I, the first gallery to the right when guests enter the museum. Mirrors on the walls and other visual cues will encourage visitors to really play, experiment, and see themselves in these interactions with forms. 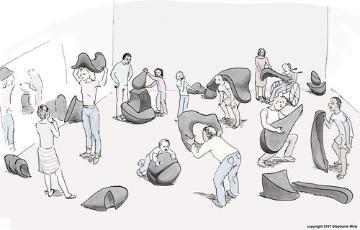 The third and final body of work is the Shape Sheets. Metz is not positive these pieces will make their way into the final presentation. The Hanging Pods and Holdables require a lot of time and engineering and she is most engaged currently in their development. If the Shape Sheets are realized, they will be perforated, cut pieces of felt that you can fold and twist and arrange into three-dimensional forms. This would be perhaps the most hands-on series as guests can actually manipulate the shapes and arrange them within the gallery. 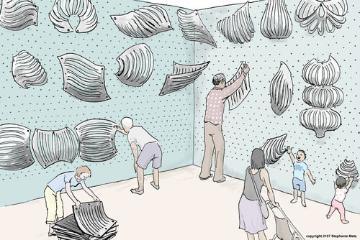 The following is Part 1 of an interview with Stephanie Metz conducted by Emily Lindsay, Marketing & Special Projects Assistant, about the upcoming exhibition.

Emily Lindsay: Tell us a little bit about your upcoming show at the de Saisset, InTouch.

Stephanie Metz: The whole point of the InTouch Project is to try to get people to interact with each other through the art, and also, hopefully, encourage people that don’t necessarily consider themselves to be “museum people” to come in and be part of it. I think it’s really easy for people to be intimidated by the museum experience, because they feel like, “Well, I don’t really know enough about this, I wouldn’t know how to talk about this, I don’t want to feel stupid, I don’t want to look stupid.” I’m hoping to really embrace people and invite them in.

I also just really like the idea of having these touchable things be something that allow you to interact, especially if you aren’t always able to interact with things. I want them to be wheelchair accessible. I’m positioning them and placing them and making them so that, whatever your abilities are, you can experience them.

Metz went on to share that she is hoping to engage diverse communities in this exhibition – communities who may not always feel welcomed into museum spaces or who may have difficulty engaging in standard museum exhibitions.

[SM] Someone sent me a link to a support group for the visually impaired, and I love the idea of having them being able to come in and experience it through touch. It’s interesting to me that, when we’re little, we’re learning so much by touching - and of course, putting things in our mouths - but touch is the way you learn about things. But then as you get older, you learn, or you’re forced to learn, that you’re not supposed to touch things, especially in museum environments. And I get it! I get that. I also feel like, as an artist, I still want to touch things, because you learn by touching.

But what happens when a lot of people touch the art?

[SM] It’s going to be really interesting to see what the reaction will be. Also, there’s the question: “They’re going to get dirty, right?”

They will probably get a bit of a patina of touch, in other words, they’ll get a little dirty. But just like how bronze shows a patina where people touch it, it will sort of be tracks of where people have been interested in touching it, and that’s kind of interesting too. And I don’t feel this sense of fear for the preciousness for them, partly because this is really pretty durable material, and also because that’s all part of the experiment. I’m just mentally prepared for it.

It’s going to be on view for a long time, close to 20 weeks. It’s going to be a long time where there will be interaction. But wool and felt are really durable and I’m trying to over-engineer them to be durable too, so I’m hoping that it’s going to be a really rewarding experience and that they’ll not only hold up well during this exhibition, but I’d love to travel them to other places, too.

The thing is inviting people to interact, but then, how do you make clear what kind of interaction is okay or not okay? I have an 11-year old and an 8-year old, two boys, and I have these photos of them with the Holdables, and there’s one image with one of them beating the other one…I’m learning maybe don’t make a lot of bat-like forms.

[EL] Yeah I was going to ask if you had a vision or an idea of what you wanted people to do specifically with the Holdables, because if they’re going to look like stones or concrete but they end up being really light, then I could see people wanting to throw them to each other or try to bounce them and see what would happen.

[SM] Yeah, I’m kind of okay with that. I don’t really want them to do horseplay, so I’m trying to figure out what kind of signage to put up, or how is that going to work. I also don’t want people to sign a waiver to play with this for fear of getting hit in the face with one of them. There are things to figure out and work with the museum on. We’ve talked a little bit about signage…it’s something we’re figuring it out as we go.

[EL] I know the question has been asked, “What if someone pulls on it really hard and it falls down?” That’s a concern too.

[SM] I was thinking about that. So for the hanging ones, I was originally going to have them hanging from the actual ceiling, but it turns out the actual ceiling in the gallery, beneath the drop ceiling, is concrete. So, I’m going to engineer a hanging framework for them instead. But yes, if someone is going put their whole body weight on it, you want to engineer how it’s going to break so it’s easy to reattach.

They’re hanging from cables that are anchored inside the sculpture, so I want the breaking point to be up where the cable is hanging from the hanging structure itself, not inside the sculpture. I was thinking of having some sort of breakaway clips where, if there’s enough force, it will fall down …Someone else suggested industrial strength Velcro, and that stuff is really strong, and if it does break then it’s a lot easier to put it back up. But I also want it to look very organic….So how to have that aesthetic effect but also to be able to fall and come down if they need to?

They’re not going to be damaged by falling, these are not that breakable really, but I also don’t want it to be a pain for people who are trying to maintain the exhibition. In a way it’s really nice that my studio is only 12 minutes from campus, …hopefully if anything were to come up I could figure out how to deal with it now before it’s on exhibit somewhere further away in the future.

Staying true to her theme of exploring the impact that people can have on their environment, Stephanie turned to her community to help create some of the art that will be featured in the InTouch Project. 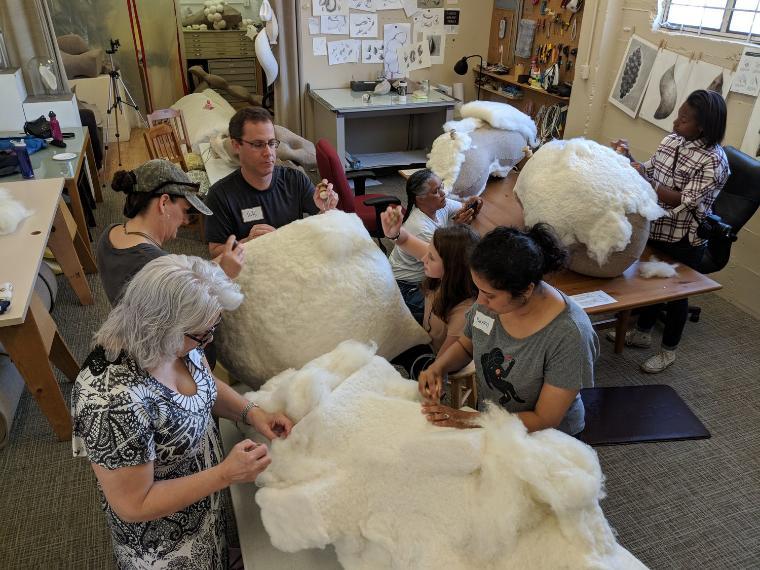 [SM] The idea of these “felting parties” came out of the idea of having people come in to the studio and help me do this work. At first I was kind of unsure about it because I had questions of “Would this still be my work if other people would help me make it?” And I know lots of other artists do that, and I have some experience with it. I started wrapping my head around that and thinking, “Yes, having people help me cover these things with the white wool would be really helpful.” And it’s another piece of the communal, the social aspect of it.

[EL] Yeah, and adding to each other’s environments.

[SM] Exactly! So I started talking to people about it and I did Open Studios in May for which I had some of the big pieces to show people, and I invited to kinda poke into it. People were in there for a long time, poking at it. It’s just so satisfying! And the thing is, you can see the changes, like you see the process and the progress as you go, which is very rewarding getting these tangible results.

So far, I’ve done, I think, 7 felting parties. It’s been people that I had known for a long time, or parents from my kids’ school, people from my mailing list that I had never really met before but they’re local, people who had just seen me do Open Studios and wanted to come back and do it, and it’s been really cool.

I think it just attracts kindred spirits anyway. Really neat people, really great conversation on all sorts of interesting different topics, and it’s really been helpful too. It really does help, and I’ve been really, really pleased with the results. I’m getting to the point where I have to do a lot of the work myself, and there’s a lot of work to go, but I’ve been really pleased.

We at the de Saisset Museum are really pleased to be working with Stephanie Metz on realizing this project! More information about this project will be shared over the months ahead through our various social media channels and our newsletter. If you do not receive our e-newletters make sure to join our mailing list today so you don’t miss out on behind-the-scenes content.

All images and drawings contained in this article are provided courtesy of the artist.  © Stephanie Metz

Stephanie Metz in her San Jose studio, examining shapes for a new work, surrounded by experiments for the Holdables and Hanging Pod series that will be part of her exhibition. Image courtesy of the artist.