Directed and acted by our talented theatre students, these eclectic theatrical gems take you on a journey across characters and genres.

THE MAN WHO COULDN'T DANCE
By Jason Katims 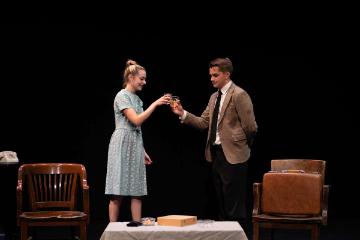 The Man Who Couldn’t Dance first stood out to me because of its relatability. At its core, all theatre should connect with an audience on an emotional level. Who hasn’t felt lost in their lives? Who hasn’t felt the pang of regret, and the stress associated with the question ‘What could have been’? Eric and Gail are grappling with these questions on their own, and together as they navigate what went wrong in their once passionate relationship. Now living completely separate lives, they are trying to piece together who they were when they were together, and who they are now, apart. As a couple, they complemented each other almost perfectly. Each one of them filled the empty space of the other, but what was missing was a commonality between them. Now, five years later, the space between them is more prominent than it has ever been, but memories of the past prompt them to fall back into old patterns. As they move through the play, I encourage you to learn and to grow with them as they are faced with identities in flux, track their journey of self discovery, and lean into the moments that feel like they could have come out of the play of your own life.

“The Man Who Couldn't Dance” is presented by special arrangement with Samuel French, Inc.

THE HOODIE PLAY
By Liz Amadio 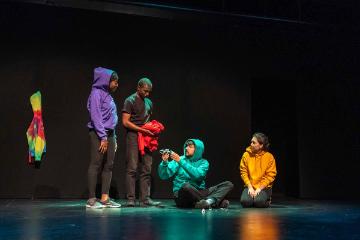 When I was a sophomore in high school, my English class was reading Of Mice and Men. I was a little bit of a slacker back then, so when my teacher called my name, I was already trying to come up with a basic answer that made it sound like I was all caught up with the reading. So, when I heard “Are you okay with the n-word?” instead of a question about Curly’s wife, I was a little thrown off. My first thought was “Well, why is he asking me? There are twenty other kids in the class.” As I stuttered out a yes, I realized it was because I was the only black girl in the room. That was the first time I realized I was different.
Flash forward three years. I was now a first-year at Santa Clara. Hungry for something to eat one night, a group of friends and I caught the last bus at 9:30 to go to In-N-Out for a bite to eat. I get cold easily, so when we stepped off the bus to walk to the restaurant, I pulled my hood up over my head. Almost immediately, one of my friends yanked it down. “You don’t wanna do that here,” He said to me, matter of factly. That was the first time that I realized I could be perceived as dangerous.
This play spoke to both of those incidents in my life. When I first read it, I found a connection, not just with Darren and his difficulty being black, but also with Justin’s disconnect from other people’s emotions, Shakti’s aloofness, and Chrissy’s high strung, competitive nature. Each of these characters are a part of me, and, I think, a part of all of us. Every human has something they struggle with and something they struggle to understand. And every human has something that they find security in. At the heart of it all, that’s what this play is about. Injustice, connectedness, and security.

"The Hoodie Play" is presented by special arrangement with Liz Amadio and Cosmic Orchid.
"Is that Jazz" by Gil Scott-Heron used with permission from the Estate of Gil Scott-Heron. 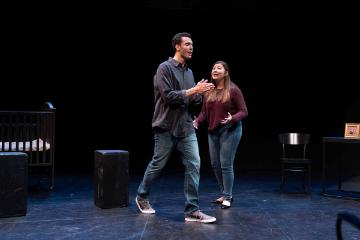 Written in communist Czechoslovakia, Vaclav Havel’s Protest makes just as poignant a political statement today in the modern United States. By peering into the human contradictions behind what people appear to be, he deconstructs the polarizing belief that there is good and evil to be found in an increasingly tumultuous, partisan political atmosphere. “Good” and “evil,” he demonstrates, are just stories that we tell ourselves to justify our positions, illusions that we manufacture to avoid hypocrisy. In Protest, he concentrates these illusions in Stanek, the high-status communist bureaucrat who never stops making judgements, creating opinions, and splitting the world into black and white. If any real change is to happen, Havel argues, we must disconnect from these illusions, as Vanek has, and recognize the reality around us as infinitely more complex than the opinions or judgements of political debate.