History often brings to mind big moments of bold change. It thrives on the public stage, but it also lives in the details—those small instances when key things happen in the shadow of the main event.

On Friday, Oct. 7, 2022, Santa Clara University celebrated a historic day with the inauguration of Julie Sullivan as its 30th president. The first woman and first lay person to lead Santa Clara, President Sullivan ushers in a new chapter for SCU. With fresh ideas, unmatched experience, and enviable energy, she takes the helm of our 171-year-old institution, poised to steer it forward.

Two thousand guests from across the University and throughout the community were on hand  to extend their messages of congratulations and gratitude. Representatives from SCU’s students, faculty, staff, and alumni shared well wishes, while key members of the local community joined prominent alumni like Janet Napolitano ’79,  and Leon Panetta ’60, J.D. ’63, to offer words of wisdom and experience. Leaders of the church invoked the University’s rich Jesuit traditions and offered blessings to President Sullivan for the journey ahead.

It was a day to be remembered with inspiring speeches, bold dreams, and broad smiles. While attention rightfully focused on the new president, another moment of significance unfolded in the background. For the first time in University history, 70 alumni representing nearly every class since 1950 joined the inaugural procession. Among the esteemed group were former student leaders; two married couples; a mother and her daughter; members of the Alumni Association Board of Directors, both past and present; Alumni Relations staff and former Alumni Association executive director Jerry Kerr ’61 as well as SCU’s first Black graduate, Mel Lewis ’53 and Mary Somers Edmunds ’62, the first undergraduate woman to graduate from Santa Clara.

Lewis, both a star athlete and student body president during high school, entered Santa Clara in the late 1940s as a football recruit. Though he’d originally set his sights on the University of California, Los Angeles, his prowess as a player prompted Santa Clara to offer him a full athletic scholarship. “I always wanted to go to UCLA, but when they offered me a scholarship to Santa Clara, I said, ‘Okay! Well, let me go out and look at it.’”

Lewis was impressed by the size and location of the school, and his high school football coach encouraged him to accept the scholarship. He knew he would be the first Black person to attend SCU, but  that didn’t intimidate him. Growing up in an integrated community in Santa Monica, California, he was often the only Black student in his classes.

Lewis still recalls that first exploratory visit to SCU with fondness, noting that he received “a very warm reception.” The players were kind and welcoming, and over the years, they would prove themselves to be quality teammates, both on and off the field.

The relationships he made at SCU propelled Lewis to return to campus for President Sullivan’s inauguration. In the moments leading up to the start of the inaugural ceremony, Lewis says he reconnected with his fellow Broncos adding, “It’s a grand thing to be here.”

In the decade following Lewis’ graduation in 1953, Santa Clara changed in other ways. In 1961, the all-male college opened its doors to women for the first time. Seventy-five female undergraduates were admitted, making SCU the first Catholic coeducational university in California. Mary Somers Edmunds ’62 and her sister were among them.

Edmunds, who had been studying at the University of Nevada in Reno, entered SCU as a senior. She recalled that when her father, who was a friend of then-SCU President Thomas Terry, S.J., learned that Santa Clara was admitting women, he encouraged his daughters to attend. “When my dad heard ‘Catholic university education’ he said, ‘Good! The girls are going!’”

Though Edmunds began Santa Clara with a small cohort of female classmates, she was the only one to complete her studies in one year. In doing so, she became the first undergraduate woman to graduate from Santa Clara University. It is not a position she takes lightly. Edmunds is proud of her achievement and honored to be the first in a long line of accomplished female alumni at SCU.

It’s this understanding of her legacy at the University that brought Edmunds to Julie Sullivan’s inauguration. “I represent the women. And every year women have something to celebrate,” said a proud Edmunds. “This [inauguration] just shows the tenacity, the ability to believe in higher goals and be able to achieve them.”

Like President Sullivan, Lewis and Edmunds are celebrated firsts at Santa Clara. Their stories are part of the fabric of the University and its long, rich history. Yet they had no way of knowing, as they crossed the graduation stage decades ago, that they would one day be invited back to SCU to not only honor, but participate in, the inauguration of the University’s first woman president.

Over the years, countless moments have unfolded in Santa Clara’s story. Some have been big and bold, others quiet and understated. Yet they have all helped to shape SCU.

On Oct. 7, we not only celebrated the inauguration of Julie Sullivan, we also witnessed a coming together of the alumni family in a new and inspiring way. Seventy alumni class representatives gathered together with a shared purpose, the threads of all their stories intersecting for the first time. 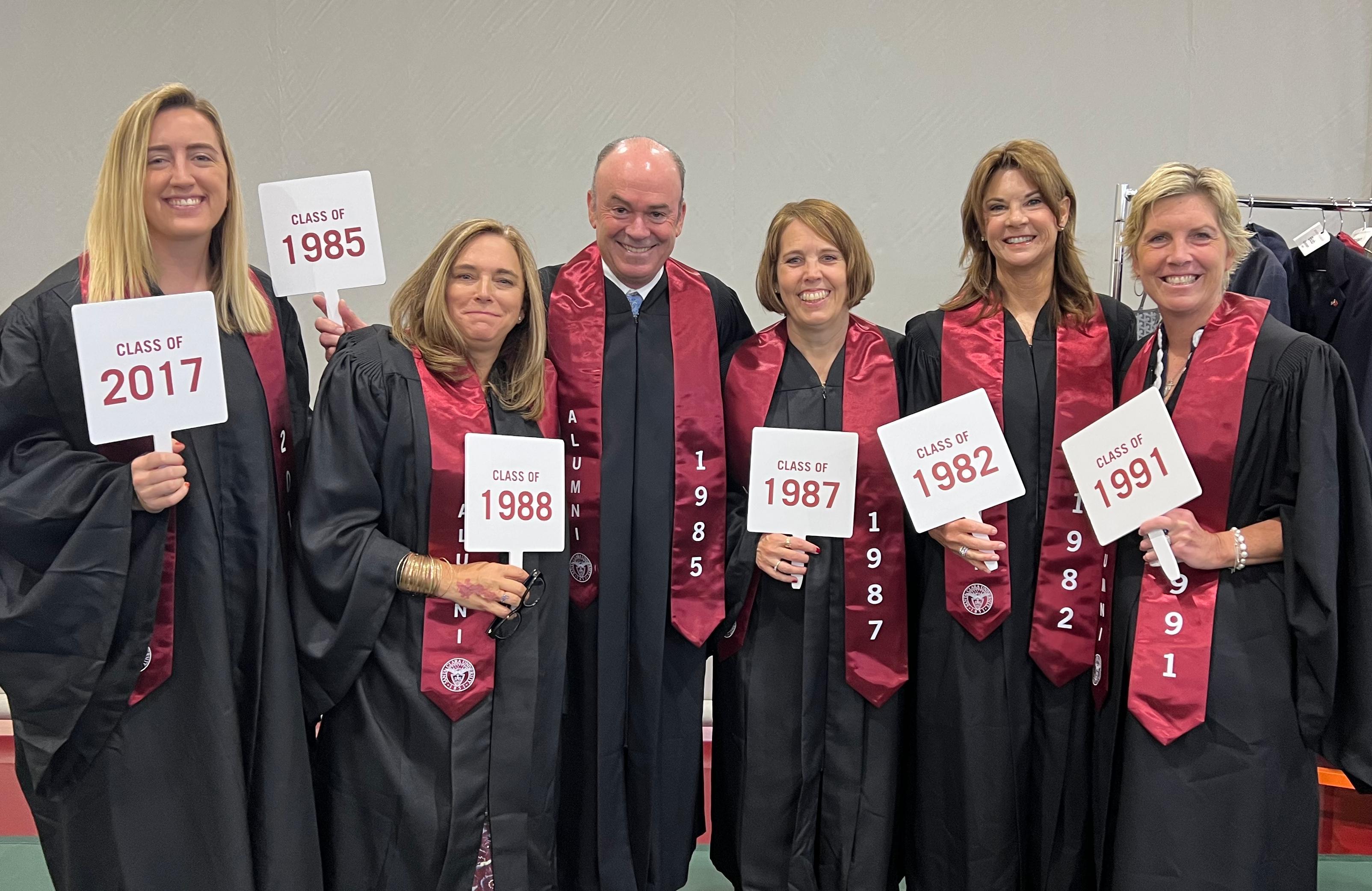 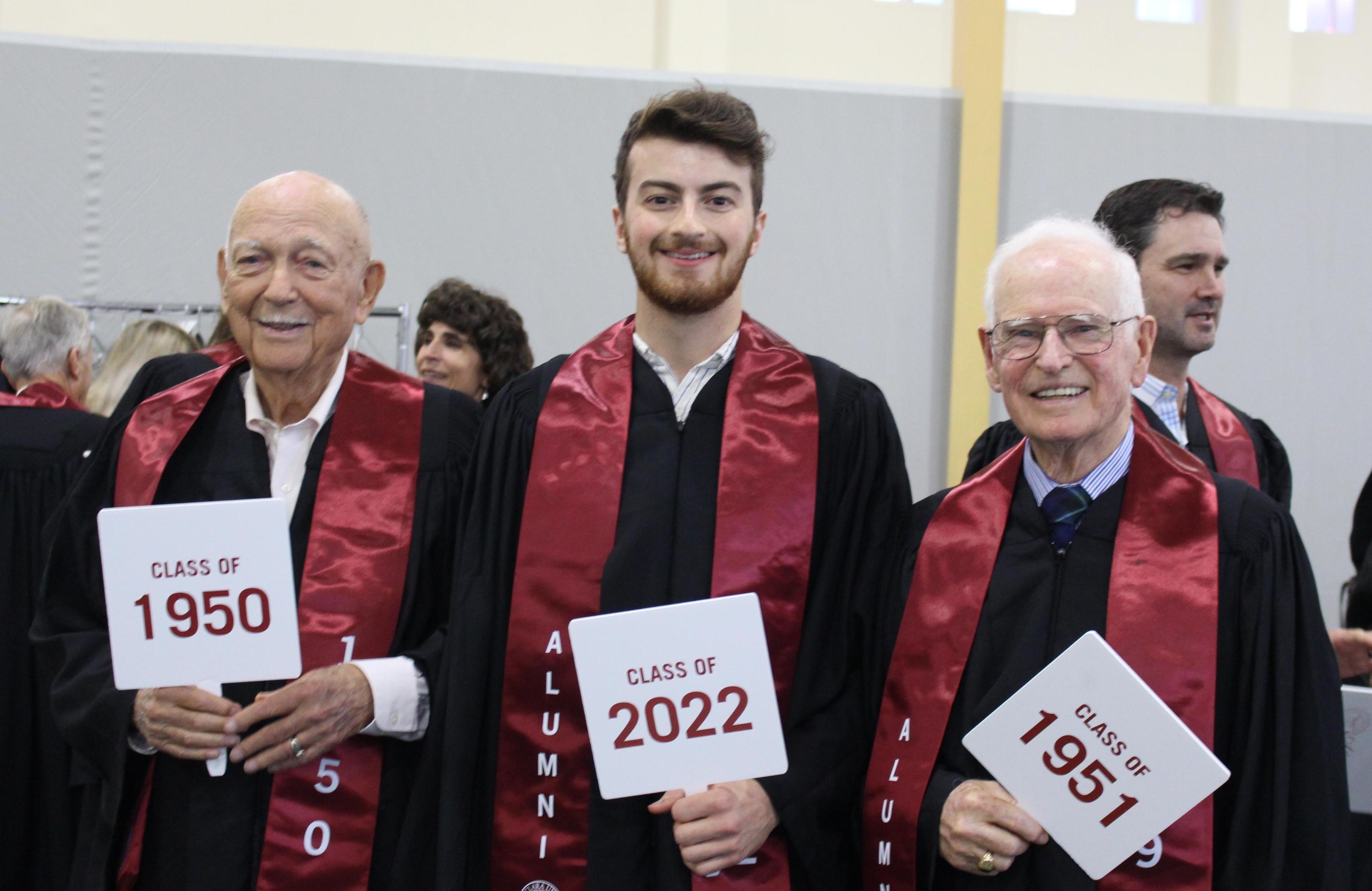 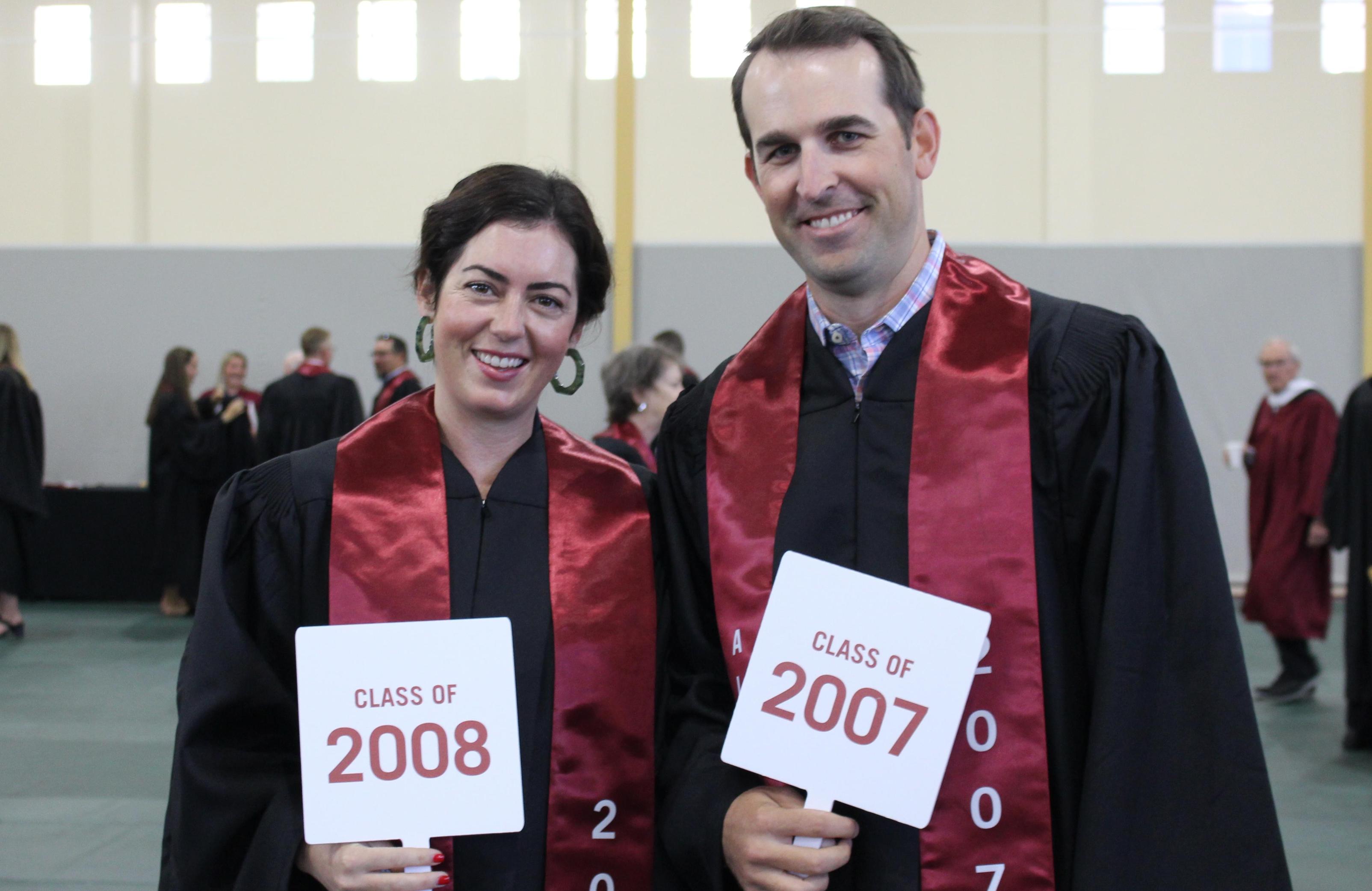 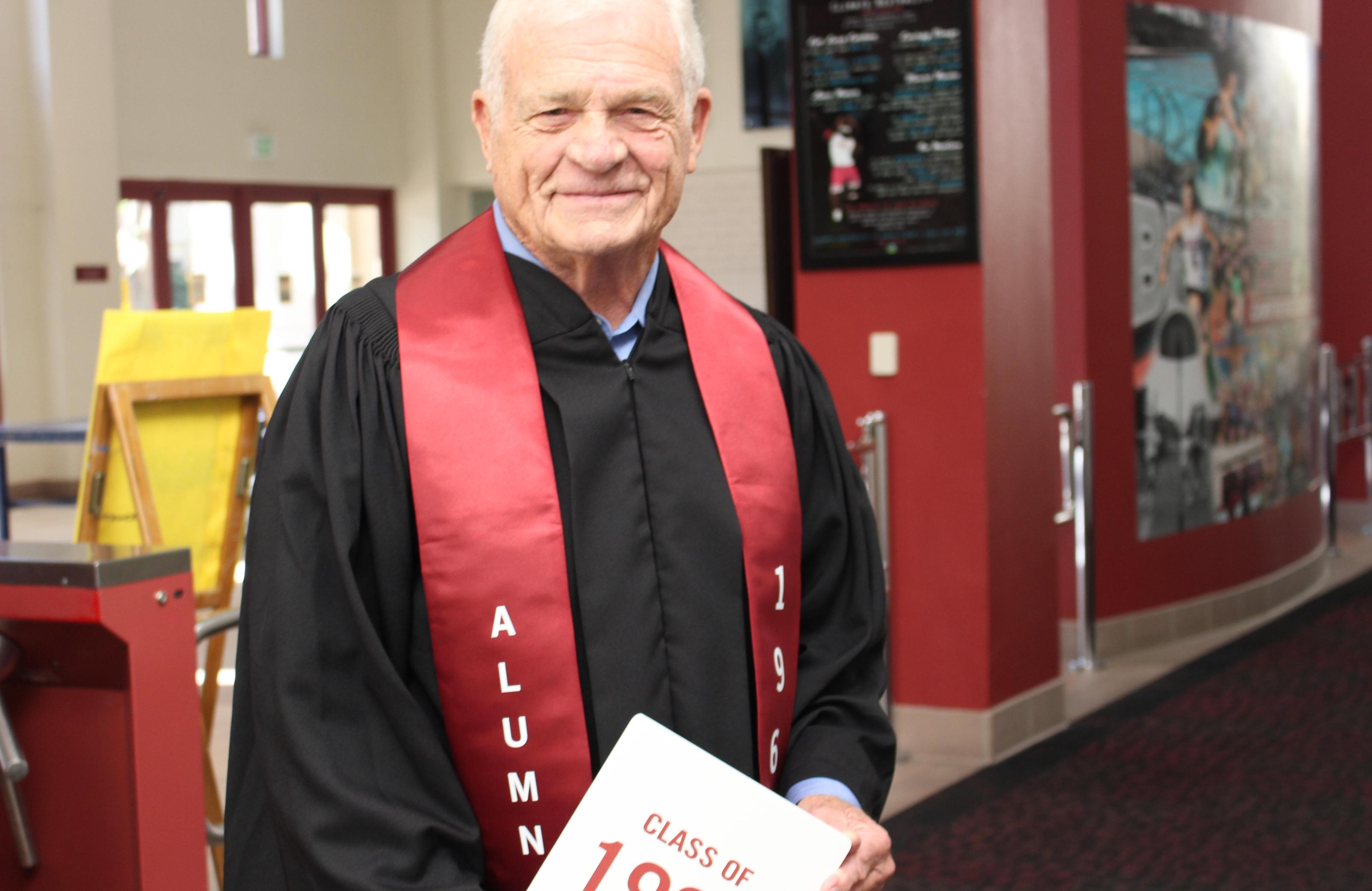 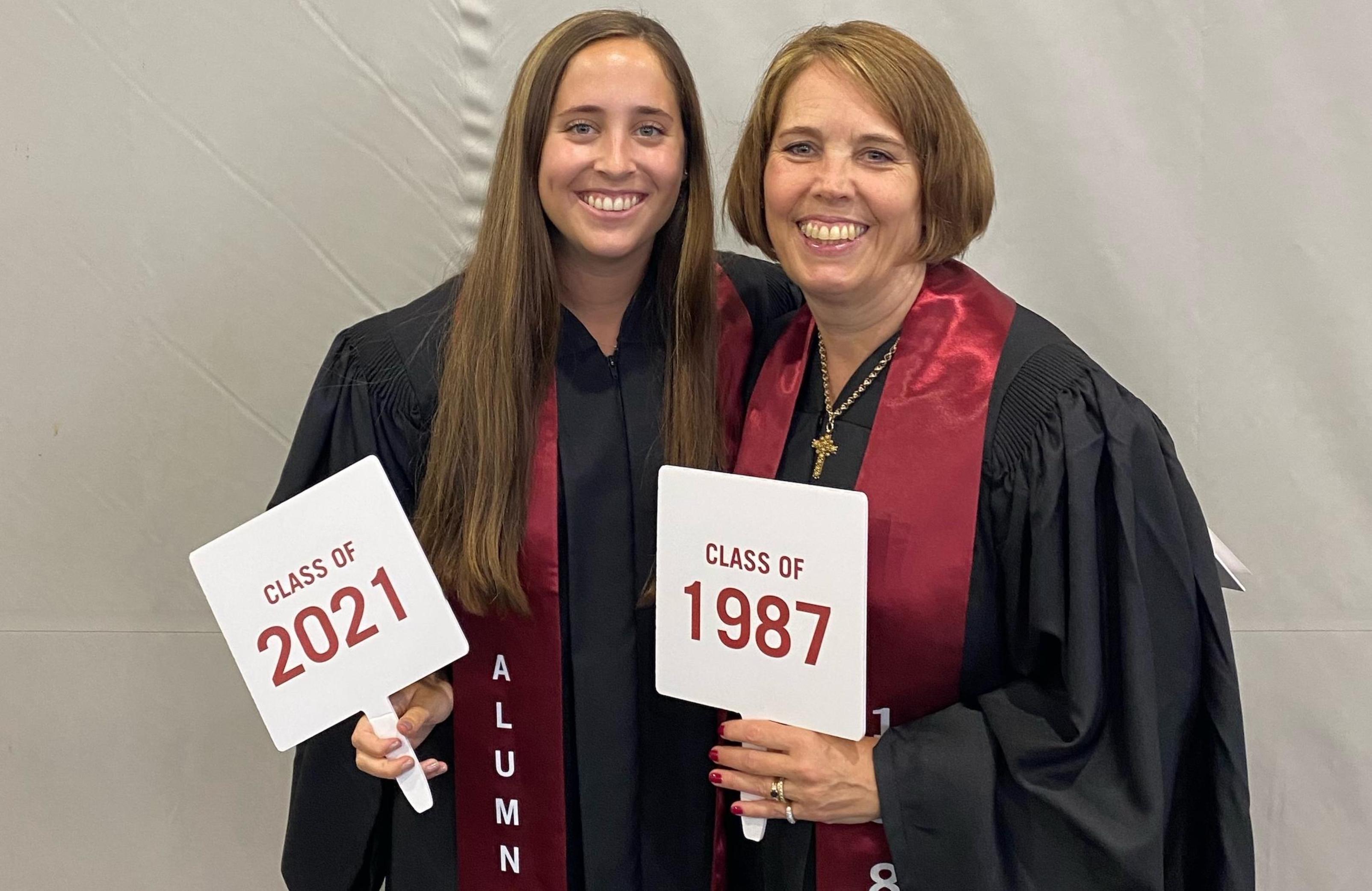 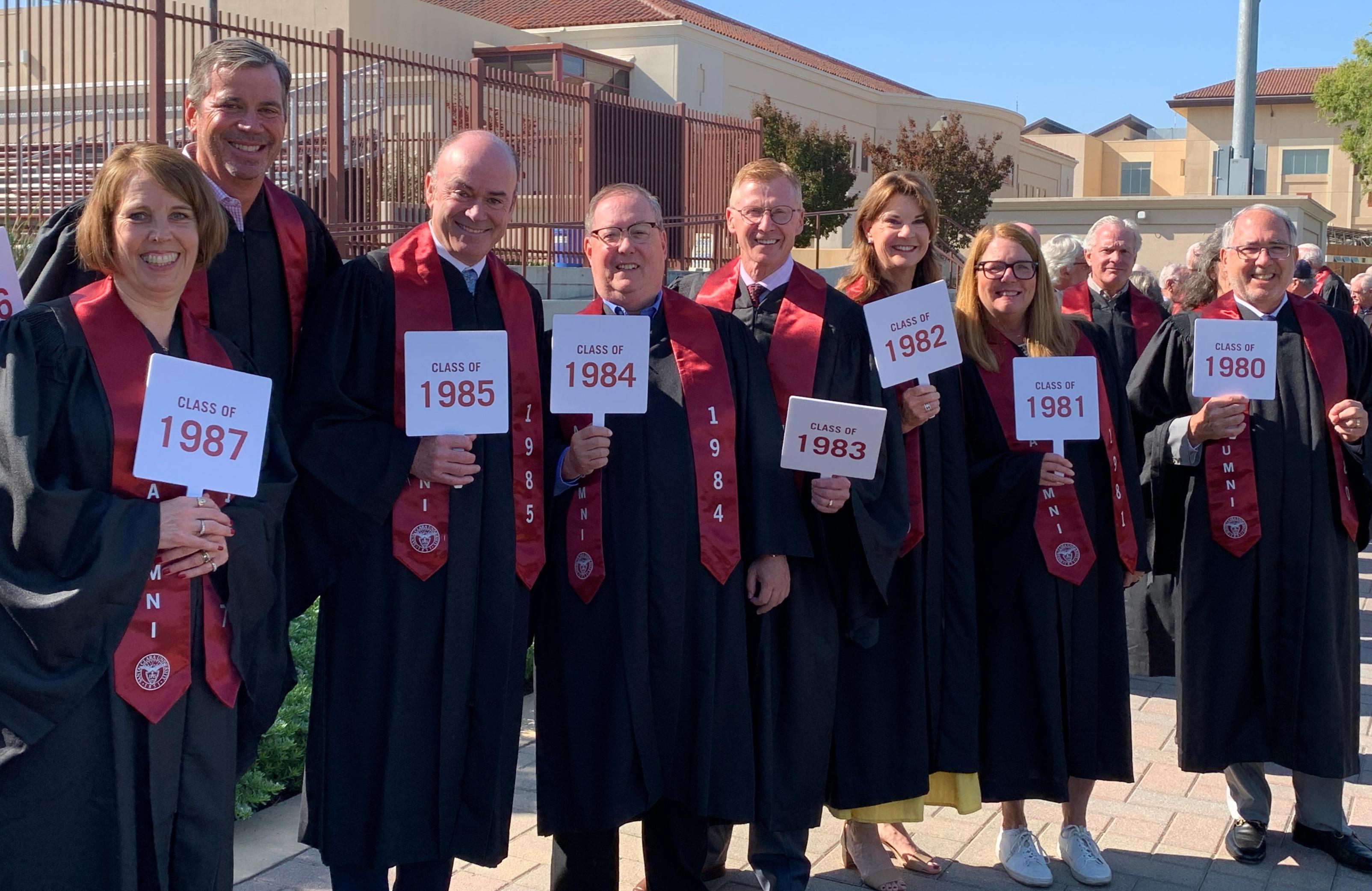 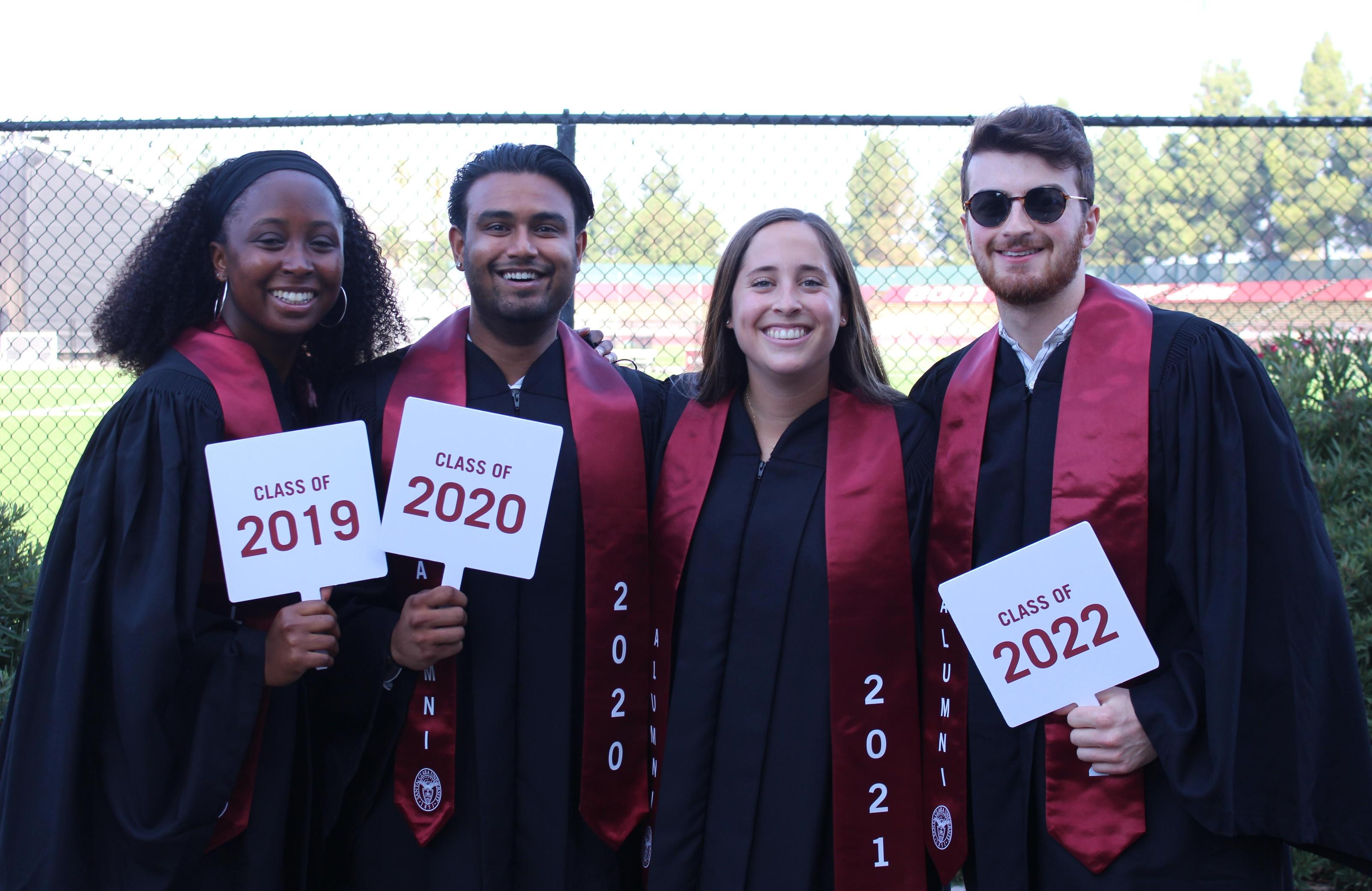