For the last several months, Ana María Pineda, R.S.M. has been actively engaged in a number of events based on her recently-published book Romero & Grande:  Companions on the Journey. On October 27, 2017, she presented “Human Fragility in the Journey to Martyrdom” at Santa Teresa Parish in San Jose, introduced by Bishop Patrick J. McGrath and sponsored by the Diocese of San Jose Social Ministries Office and Santa Teresa Parish Social Action Ministry. At that event her former student, Santa Clara University graduate Tony Ferrari '15, assisted her. On November 12th, the Dominican Sisters of Mission San Jose sponsored her presentation “Exploring the Path of Modern Martyrs:  Archbishop Oscar Romero and Father Rutilio Grande” at their Center for Education and Spirituality in Fremont, California. This was followed by a book presentation and signing on February 11th at Mercy Center in Burlingame, California. On March 9th, Dr. Juan Velasco of the SCU English Department assisted her at an additional event entitled Romero & Grande: Companions on the Journey at SCU. One of the features of the event was the document (positio) prepared for Archbishop Romero’s beatification process, which SCU has acquired for the library’s special collections.  Bishop Patrick McGrath participated in the event and spoke on the significance of the positio.

On March 24, 2017, Pineda gave the keynote address at the Catholic Social Tradition Conference at University of Notre Dame, South Bend, Indiana.  Her address, "Oscar Romero:  Social Justice, its Call and its Cost,” provided an understanding of Romero's journey toward embracing justice for the most impoverished, his intellectual interest in the church's documents on social justice, and the eventual price of his martyrdom.  A unique feature of her address was the use of Archbishop Romero’s unpublished notes. Stephen Pope of Boston College and Cardinal Luis Antonio Gokim Tagle of the Philippines also presented key addresses. On Monday, March 27th, Pineda gave a presentation at Notre Dame's Romero Conference Days on her recent publication followed by a similar presentation and book signing at Catholic Theological Union in Chicago on Tuesday, March 28, 2017. Cardinal Oscar Andres Rodriguez Maradiaga of Honduras who presented at the Romero Conference Days graciously offered to hand-deliver a copy of Pineda’s book, Romero & Grande: Companions on the Journey, to the Holy Father when visiting Pope Francis in April. Rodriguez is one of the nine-member Council of Cardinals who advises the pope.

At the end of April, Pineda attended “Beauty and Knowledge, Love and Justice,” a symposium held at Boston College on the theological contributions of Dr. Roberto Goizueta. She presided at the opening liturgy for the symposium and participated in the symposium. 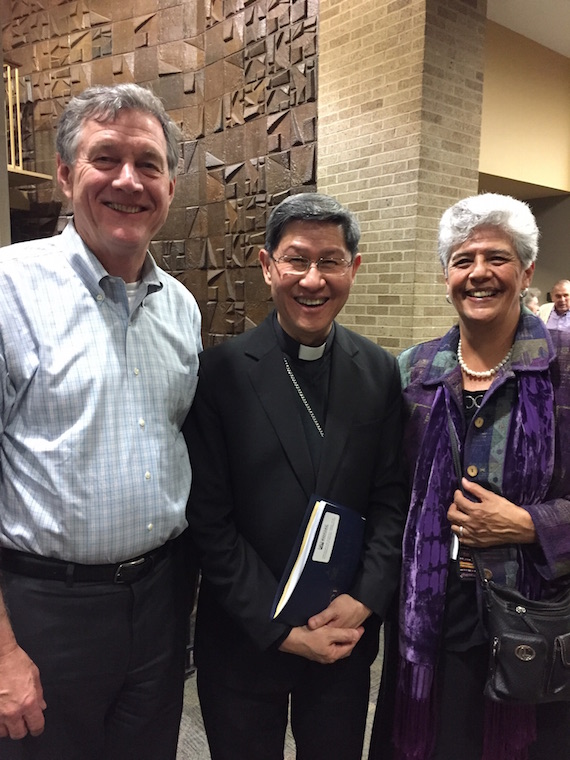