Religion in the Age of Trump 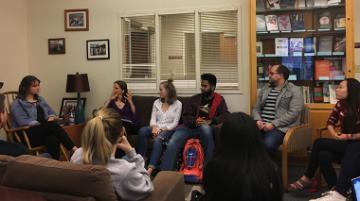 On election night, November 7, ten students and seven faculty gathered to discuss “Religion in the Age of Trump.” Dr. Lynn Jencks led the conversation, offering a few observations made by religion scholars in a recent issue of Religion and American Culture: A Journal of Interpretation.

Dr. Paul Schutz helped facilitate the dialogue, which ranged from Trump’s personal religion (Presbyterian, and raised on Norman Vincent Peale’s early “prosperity gospel”) to the relationship of white supremacy and Christian nationalism. Dr. Jencks noted that some of this Christian nationalism grounds itself in a myth of a white Christian medieval Europe and imagines its mission as purifying the country of outsiders à la the Crusades.

Others raised related matters, of immigration, the Muslim ban, the rise of terrorism and the economic dislocations of the past decades that have led many to hope for a kind of messiah who could lead them to a prosperity that they’ve never actually experienced, but that is such a deep part of our national mythology.

The fact that a majority of evangelicals and Catholics voted for Trump in 2016 led to some discussion of why. Several students spoke with clarity and concern during the full hour slated for the event.