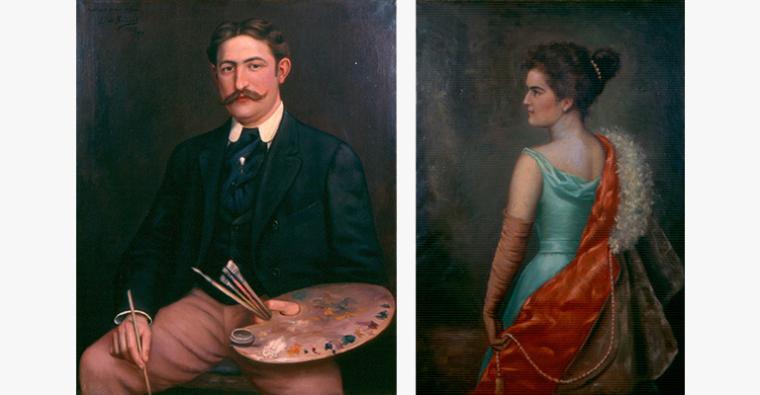 The de Saisset family was among San Jose’s most affluent families during the mid- to late 19th century. Pedro de Saisset, who became a prominent businessman, immigrated to the Bay Area in 1849. Although he arrived during the height of the Gold Rush,  he wasn't necessarily seeking gold. He was, however, certainly intending to capitalize upon the wealth that was quickly accumulating in California.

Born in 1829 to a prominent French family, Pedro de Saisset was the son of Henriette Clemence de Saisset and Dom Pedro I, Emperor of Brazil, with whom she enjoyed a brief love affair. Raised in Paris, young Pedro attended the University of Paris, earning the equivalent to a Bachelor’s degree, and studied law for one year before setting sail for the Americas. He stopped briefly in Rio de Janiero before continuing his journey north.

Once settled in San Jose, California, Pedro married Maria Palomares de Suñol de Saisset. The mother of three daughters—Dolores, Narcisa, and Josefa Suñol—Maria had been widowed by her first husband, Antonio Suñol in 1855. Antonio had owned a large ranch in the East Bay, near present day Sunol, and had been murdered by squatters during a land dispute.

Pedro and Maria began their life together with considerable advantages and became more prosperous with time. A former officer in the French National Guard, Pedro maintained allegiance to his native country by serving as a French consular agent. In addition to his political position, Pedro was an astute businessman; he owned several real estate holdings in the San Jose area. In addition, in 1882, Pedro incorporated the Brush Electric Light Company, the agency responsible for delivering power to San Jose, and became its first president.

Pedro and Maria de Saisset had four children: Henriette, Ernest, Pierre, and Isabel. Henriette (b. 1859) and Isabel (b. 1875) both attended the State Normal School. Henriette eventually married Dr. Eugene Filipello. Isabel was briefly engaged, but was widowed by her fiancé and never married. Pierre (b. 1870) was married for a short time, but the union came to a scandalous end and he remained single for the rest of his life. None of the de Saisset siblings had children of their own.

Ernest de Saisset, the second oldest child of Pedro and Maria, was born in 1864. As a young man he attended Santa Clara College (now University), where he was awarded high marks in French, penmanship, elocution, and figure drawing. While at Santa Clara, Ernest studied oil painting with Brother Tortone, who rated his work “premium” in quality. Unable to find suitable professional art instruction in San Jose, Ernest appealed to his father to send him to France to study. In 1887, his father agreed and Ernest traveled to Paris where he studied at the Académie Julian for several years. Although he studied with a number of masters, it was Adolphe William Bouguereau who had the greatest impact on his aesthetic direction.

In 1895 Ernest returned to San Jose and set up a studio in the de Saisset family home on South Market Street, located on property now occupied by the The Tech Museum of Innovation. He died a few years later in 1899 of what was then diagnosed as rheumatism. He was 35 years old. Ernest's parents outlived him—his father died in 1902 and his mother in 1907—as did his brother Pierre, who died in 1933, and his sister, Henriette, who died in 1947. Ernest's youngest sibling, Isabel de Saisset, passed away on April 22, 1950, leaving a bequest to Santa Clara University that resulted in the founding and continued administration of the de Saisset Museum.