The regimen of being a student athlete leaves little room for much else; but that didn't stop Associate Head Pete Cushman from taking his team on an Immersion trip. 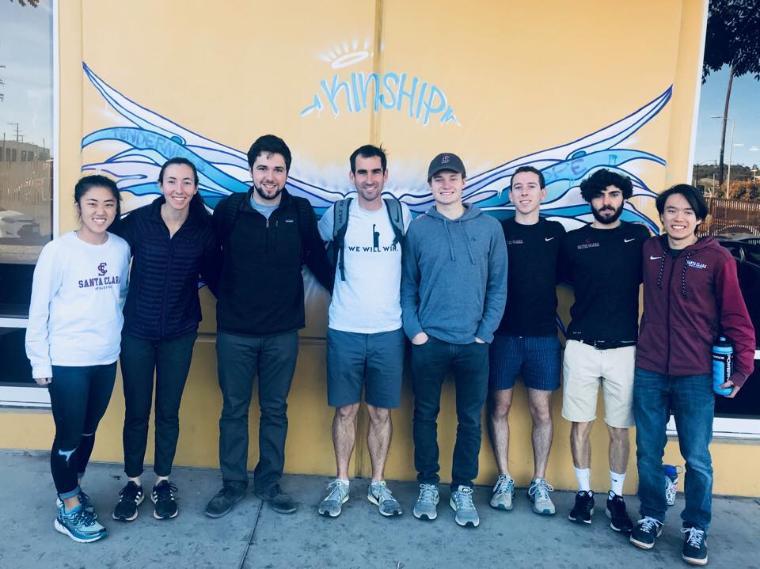 What was your first experience with the Ignatian Center?

My first experience was about 4 years ago. The Ignatian Center was interested in getting more men to go on Immersion trips, so they reached out to me. I ended up taking about 10 members of our men’s team to the Navajo Nation and it was a great experience.

What made you decide to do the trip?

The typical student athlete experience can become two-dimensional and it’s really difficult for them to do a lot of the things that normal students get to do. There are a lot of demands of being a student and there are a lot of demands of being an athlete, so there isn’t much room for other stuff. Our athletes don’t get to study abroad or join a fraternity – there are just certain things that they aren’t able to do. So, we felt like we wanted to be able to open doors to other experiences beyond this two-dimensional world. The immersion trip gave us a great opportunity to experience another culture and learn new things.

You’ve since gone on a second Immersion trip with members of your team. How did that play out?

This second trip, we took 8 men and women from the team to East Los Angeles. One of the things that really made that first trip so great was seeing how the team grew closer and really bonded. I wanted to have that same experience with this second group. Even though they all knew each other well before the trip, the deep discussions and reflection that occurred on the trip really allowed us to grow closer as a team.

I have heard from others who’ve gone on Immersion trips that the friendships they formed with their fellow travelers have been so impactful. I was wondering how that played out with a team of people who theoretically already know each other.

Yeah, with running (or any sport, really), you spend hours together, and you really get to know people and share in the misery! I mean, it’s great, but it can often be very miserable. There’s a lot of suffering with running and it’s not easy, which is why I think a lot of people don’t do it. But, it brings people really close. Having the opportunity to get to know each other even better on the immersion trip was great.

So, tell me about the East Los Angeles Immersion trip. 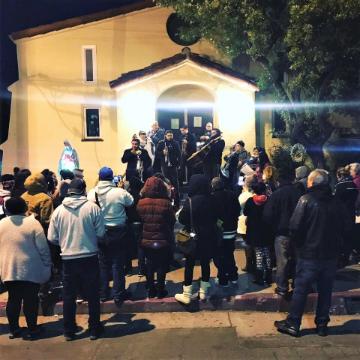 The East Los Angeles Immersion trip over winter break was an incredible experience and far exceeded my expectations. We did home stays in Los Angeles, which allowed us to really get to know the people in the community and build relationships, especially with our host. I thought I had a good idea of what it would be like, but it was beyond anything I could expect and the homestay was a big part of that.

We were fortunate enough to be there during the Our Lady of Guadalupe Celebration at Dolores Mission. It was an unbelievable experience. The day of the celebration, we got up at 3:00 AM and listened to the mariachis play on the front steps of the mission until 5:00 AM. Everybody was there – the whole community – and everyone was singing. We sat with the homeless people who are sheltered at the mission each night. We ate Menudo with them and had amazing conversations. One guy told us how he used to go running in Griffith Park. It was an eye-opening experience for the students and for me. And that was just one morning! There were so many parts of that trip that were just amazing.

You went to Homeboy Industries as part of that trip – tell me about that.

The visit to Homeboy Industries was actually something I had some expectations for because I read Father Boyle’s book before going. But, the sense of community there is remarkable and something I didn't anticipate. It felt more like a family. They were really welcoming.

We had an amazing tour guide who had only been there about six months. He was so funny and just really great at his job. One thing we reflected on a lot was how amazing he was and how just six months prior he had been stabbed. He actually said “A lot of people talk about second chances. But for me, this is my first chance.” I think that this was probably the most powerful statement of the trip - the thing that we all talked about the most. He had a rough start and ended up getting kicked out of school and selling drugs. Now he’s getting his college degree. There’s a lot of talent out there that goes unfound and unseen.

How old was he?

He was about 24 years old so relatively close in age to the students. That blew them all away. It was a reminder that circumstances dictate so many things, and to that point earlier, that there is a lot of talent out there and some people just never get their first chances.

Have you witnessed any lasting effects on your students or yourself from this experience?

Absolutely. I’ve noticed that the team members are more bonded to each other, and even to me. Team culture is so valuable and it’s one thing that every coach is trying to foster in their team environment.

I know my perspective has changed since the trip. I’ve noticed how different the church experience is here compared to there. When we were in East L.A., the congregation felt like a big family. They went to services together, they ate a meal together, and they worked together. The people went out of their way to make us feel part of that - they prepared meals for us, drove us to places we needed to go. It was incredible and something I just don’t see in our church community.

I’ve also seen it change the way the students think. I’ve seen them start to do things in the community on their own, without my guiding hand. It’s great to see them own it and take action here in their own neighborhood. The Immersion trip gave them the chance to step out of their two dimensional world, experience another world, and think about other people.