As the 2018 fall quarter ended, engineering students took their last finals in SCU’s Sullivan Engineering Center, and faculty and staff packed up their offices and labs in preparation for demolition day fast approaching. With new construction about to begin onsite for SCU’s impressive STEM complex, the Sobrato Campus for Discovery and Innovation, a new era of engineering at Santa Clara is also beginning to take shape.

But thirty years ago, the Thomas J. Bannan Building was still new when Vince Llorin ’92 set foot on campus as a first-year undeclared engineering student. Circumstance played into the Hawaiian’s decision to come to SCU. “I was the only child of a single mother and I grew up in the ‘hood. I came to SCU because Santa Clara had the earliest deadlines to submit applications. I found out I’d been accepted before the process even started at USC or UOP. I guess it was destiny I became a Bronco,” he laughed.

Professor Reynaud Serrette, who joined the faculty during Vince’s senior year and now serves as department chair recalled, “At the time Vince was studying here, about 25 percent of our civil engineering students were from Hawaii.” The Hawaiian connection would play a big role in Vince’s path at SCU and beyond. “I was having dinner in Benson Center one night when one of the Hawaiian guys came up to me and asked how much I weighed. I asked why he wanted to know and he told me the boxing coach was looking for ‘some little guys’ and needed someone in my weight division. I joined the team, but really didn’t want to compete—I just wanted to train.” At 112 pounds, there wasn’t much competition for him out there, anyway. He boxed in only one exhibition match before facing off against a fighter from Air Force in the National Collegiate Boxing Association’s championship—which he won!

Vince continued boxing throughout his time at Santa Clara, chose civil engineering as his major and excelled in both. In 1991 he was named the department’s outstanding junior. “I guess I was selected for being well-rounded; not just in academics, but also for being a collegiate boxing champion. My mom was very proud; she flew out to see me get my award,” he remembered. During his senior year, “there was another Hawaiian student whose father owned a consulting engineering firm. She said, ‘if you want work, call my dad.’ I did and got a job offer over the phone. I talked to him not too long ago and he said he hired me because of my academic award,” he recalled. That offer led to 7 years working in private industry. Later, he joined the State Department of Transportation highways division, where he has worked for the past 19 years. “My first position was as bike and pedestrian coordinator and ADA coordinator. I was project manager for Hawaii’s bike plan, setting the footprint for Hawaii to become more bike and pedestrian friendly. After about five years, I became project manager for typical highway division projects—bridge improvements, roadway widening; things like that,” he said.

“It feels good putting my education to work for the benefit of Hawaii, and I love being here. I just came in from surfing and am about to go back out. ‘There’s no other place that I’d rather be than home in the island in the middle of the sea,’” he said, quoting a favorite island song. 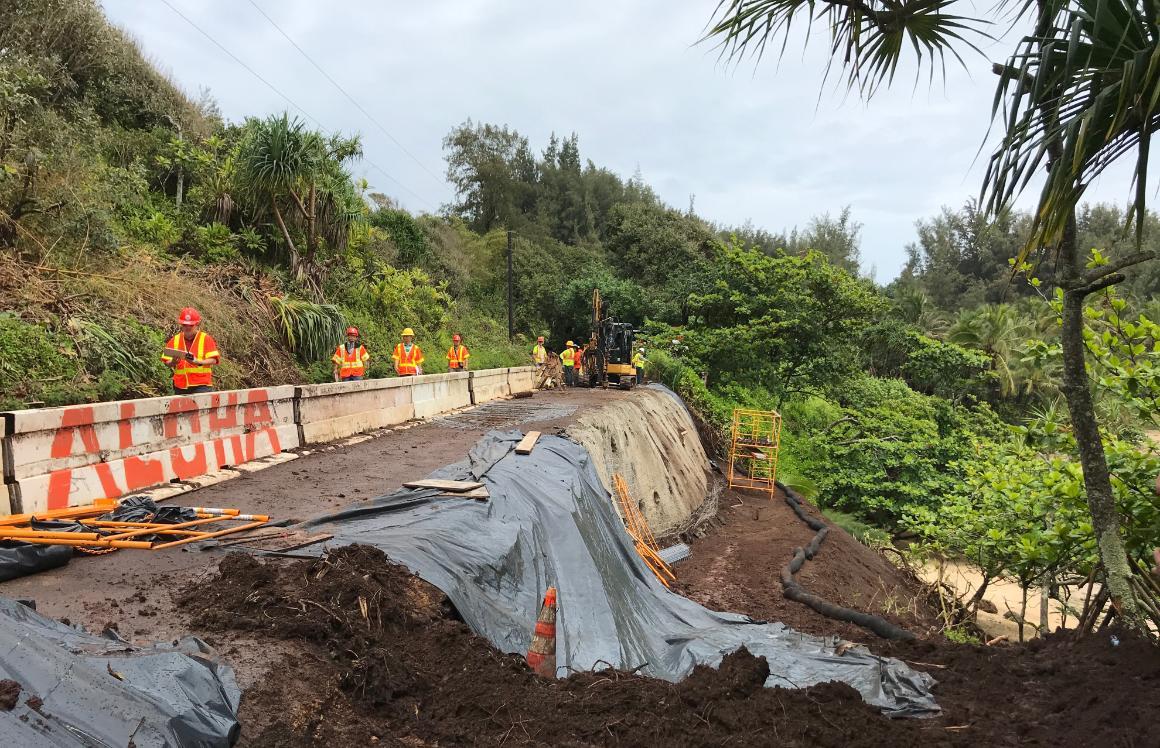 Just another day at the office for Vince Llorin '92.