The I’s Have It: Injury, Internships, Involvement for the Win

Julia Lieberman '21 is not one to sit on the sidelines! After recovering from numerous sports-related concussions, this go-getter leveraged her passion for building community during the Coronavirus pandemic to help create better networking opportunities for her peers here on campus and around the world.

Injuries and internships have marked Julia Lieberman and set her on a path to combining her love of neuroscience, neural engineering, and coding with her passion for building community. And it all started with a concussion.

The summer before her sophomore year of high school in 2014, Julia wasn’t what you would call your typical Seattle teenager. An avid athlete—skier, equestrian, soccer player—she was also soaring above the ocean waves harnessed to an inflatable kite as a semi-professional kiteboarder. This last bit on her resume had just led to a concussion (the first of 13 she would eventually suffer due to her active lifestyle) and a months-long sentence of confinement to a darkened room. During her recovery, Julia’s mother read to her an article about the Human Connectome Project that was mapping the human brain, and Julia was intrigued. An internship the following summer at the Center for Neurotechnology deepened her interest in the field and provided the added bonus of introducing her to the joys of coding. “I was writing code in MATLAB to map the relative resistivity of human brains, and it was so cool; I knew this was what I want to do,” she said.

Julia enrolled at Santa Clara as a neuroscience major, but eventually switched to mathematics and computer science. During her first year, injury continued to plague her. “From January of my first year through January of my junior year, I was in and out of concussion rehab and couldn’t be much of a human,” she reported.  At the one-year mark from her last concussion, Julia was given the greenlight to interact with people again. She became involved with the School of Engineering’s student chapter of the Society of Women Engineers (SWE), joining the board in the corporate relations position, where she arranges networking events and workshops with corporations and industry leaders,  and helps secure corporate sponsorship. Her work during four summer internships at Microsoft included helping with recruitment events, so enabling interaction between industry professionals and motivated students was a good fit.

Bringing people together is a passion of Julia’s. This year, she became involved with intern.club, a global community run by interns to help fellow interns meet, network, and learn from each other. The group has more than 4,000 members and 53,000 newsletter subscribers, and Julia hosts up to four events per week (what she calls her “side projects”). “Intern.club has so much going on; there’s an interview boot camp series, virtual coffee matches for you to meet someone new, an investor’s channel, and other random channels for you to get feedback on all sorts of different topics. I manage the engineering channel and the women’s channel, which brings successful women from different companies right to us.  It’s amazing to get to interact with passionate and wicked-smart people from Google, Netflix, Kitware, and others,” she said, excitedly. 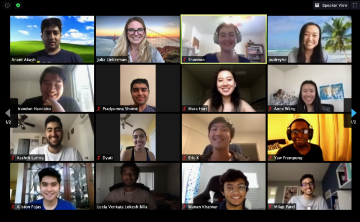 This summer, intern.club hosted their first-ever InternCon, a virtual conference where students and new grads had the opportunity to hear from some of the youngest and brightest entrepreneurs, engineers, VCs and designers. As one of the organizers, Julia helped with the backend, making sure the tech was working for the expo, mainstage, breakout rooms, pitch competition, speaker and networking events. “I was so excited to be a part of this. We had over 4,000 participants, and I helped put on the world’s largest event for interns! I met a lot of the speakers beforehand and moderated a keynote event with John Whaley, the founder and CEO of UnifyID, a new security company. Most exciting for me was that I got to meet Julie Pitt, Director of Data Science at Netflix. These leaders are more than happy to share their expertise with our generation, we are just enabling them to maximize their impact.,” she said.

As she heads into her senior year, Julia looks forward to continuing her work with SWE and with intern.club. “With COVID-19 and the extreme physical isolation we are experiencing this year, we students need to figure out how to navigate our careers in a whole new way. Connecting with smart, passionate people here at SCU and from different fields all around the world is amazing. We have an opportunity to interact with each other in a way that wouldn’t happen organically under normal circumstances. A lot of doors have closed due to Coronavirus, but that leaves room for growth, and I’m trying to capitalize on that,” she said.

And what about all those concussions? Has she quit sports? “I no longer compete, but I still do just about every sport on the planet, with a little more caution—and with a helmet!” Julia said with a grin.