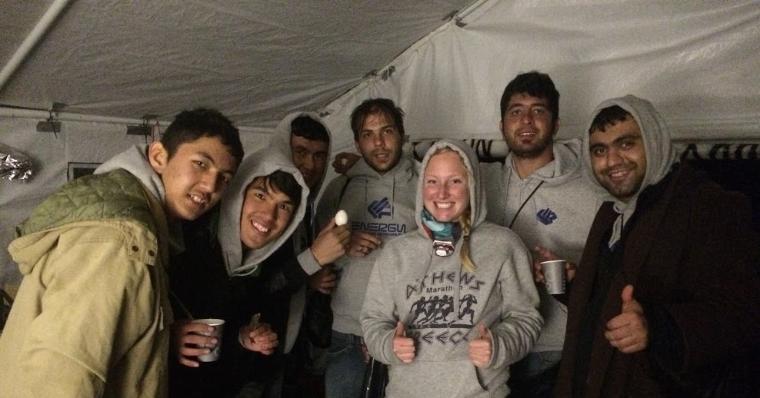 When she began her studies at Santa Clara, Colleen Sinsky '10 anticipated that she would pursue a career in economics in the Bay Area. But an immersion trip to El Salvador during college changed both her worldview and the direction of her life.

After graduation she spent years working with the homeless until fate intervened again. This time, a backpacking trip to Turkey led her to volunteering with refugees on the Isle of Lesvos, where many Syrian refugees arrive when seeking asylum in Europe. Sinsky shared her story and told us about the role of a Jesuit SCU education in sparking her pursuits.

Can you give us a little bit of your background post graduation and prior to this experience? ­

I graduated in 2010 and spent a year of service with the Jesuit Volunteer Corps Northwest doing street outreach and housing support for the homeless community in Portland. What was supposed to be one year “off” turned into four years working with the marginalized population navigating resources and being a supportive advocate.

During this time I also volunteered alongside an emergency response team doing intervention for the friends, family, and witnesses of traumatic deaths. I also did a Wilderness First Responder course with the National Outdoor Leadership School in Yosemite.

How did you get involved with volunteering on the Isle of Lesvos? ­

I was spurred to volunteer after seeing dozens of Syrian refugee families sleeping under bridges in Istanbul, Turkey, while on vacation. I was backpacking around the Mediterranean with a friend. I’d spent several months working in a remote spot in Alaska, and was pretty isolated from the news. I didn’t grasp the scale of the refugee crisis until I saw it with my own eyes in Istanbul. There was a specific moment of eye contact with a refugee mother, quietly holding her toddler in a darkened doorway, when I realized that I couldn’t leave without getting involved.

Did you have an experience at SCU that ignited your interest in this type of work? ­

My most influential experiences at Santa Clara were the two immersion trips I participated in during spring break my sophomore and junior years. The time I spent in El Salvador rocked my rosy worldview. Prior to experiencing the poverty and trauma of post­war El Salvador I planned to pursue a future working in economics in the Bay Area. Instead, I’ve been able to pursue a Jesuit­ inspired career of service.

Can you tell us in a nutshell about the situation for refugees there?­ What were your first days like?

I had a cheap hotel room and the rental car for a month. I hoped that with my emergency medical experience and crisis social work experience that I could make myself useful. After spending an afternoon of wandering, I met Henrik, a Norwegian coordinator of an independent volunteer team, doing work on the beaches and in the refugee camps. Bouncing in an old Jeep along the dirt track above rocky beaches, Henrik brightly explained each landmark we passed. An average of 3,000 refugees landed on Lesvos each day,­ the majority on the northern beaches we passed.

Could you tell us about some of the families and people you met?

The post “Five Stories from Lesvos” has good material – better than anything I could reproduce now. When a refugee boat gets as close as it can to the shore, lifeguards approach it and are carefully hand the babies and small children who are then passed along a human chain of volunteers, like me, until they are safely on the shore of Europe. I was always blinking back tears while comforting, distracting, and checking a scared, shivering toddler for injuries.

What was the response to your blog on your experiences?

I’ve received hundreds of supportive messages and questions on how to get involved. The stories I’ve written and photos I’ve taken have been shared and translated around the world. I’m absolutely blown away by the power of social media, but also aware of the limited effect that digital support can have on a real issue.

Did any of your SCU memories help during the challenging moments? ­

I am so grateful to SCU for educating me beyond the classroom, and for creating the opportunity to learn in the real world. I’m grateful to senior lecturer Claudia McIsaac’s course “Creative Writing for Social Justice,” which empowered me with storytelling as a tool for social change.

Colleen hopes to return to Lesvos later this Spring to volunteer for a few months. Follow her journey.