Aaron Weast ’99, B.S. mechanical engineering, could not have foreseen his future as a designer of embedded electronics in footwear and sports apparel while an undergrad, but looking back, he certainly sees his Bronco past as a crucial stepping stone to his career.

He credits his current success as senior engineering manager at Nike to the broad, interdisciplinary nature of his Santa Clara undergraduate degree. He heads the engineering team that innovates at the intersection of consumer electronics and sports, creating performance products like the Nike+ SportBand, which keeps track of running stats in real-time, and the new Nike+ SportWatch GPS.

“The ME143 class—where mechanical engineering meets electronics meets programming—certainly spurred a huge interest in mechatronics,” Weast says. The depth of his engineering courses gave him a top-notch technical toolkit to design effectively, but the breadth of his education has helped him communicate those ideas to non-engineering colleagues.

“A big part about working here in a non-technical company is that you have to communicate with those who couldn’t care less about a stress-strain curve,” he says. “The cross-disciplinary thinking that they teach you at Santa Clara has been extremely critical, because Nike is a place where I have to sit in meetings with marketing folks and designers, none of whom have an engineering background.”

He regularly translates engineering concepts into terms non-engineers understand. “Without the breadth in my education, it’s hard to imagine being useful to Nike,” he says. At a recent trade show, he impressed a designer colleague by communicating a project idea in terms of Platonic forms, a concept he learned in an SCU philosophy course. “His jaw just dropped,” Weast laughs. 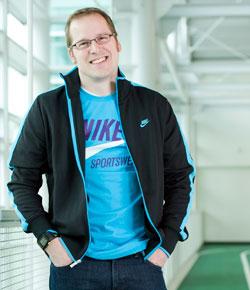