Many alumni will remember the days when The Alameda ran straight through campus, leading to 18,000 pedestrian crossings and 40,000 vehicles passing through each day. Students, faculty and visitors were constantly put in danger when navigating from one side of campus to the other.

In 1958, in an attempt to alleviate the problem, then-president Patrick Donohoe, S.J. asked engineering alumnus E. Jackson "Jack" Going ’49 to move The Alameda. Thirty-one years and $25 million later, the task was achieved, thanks to the efforts of the University, the City of Santa Clara, the California Department of Transportation, and, of course, Jack Going, who kept the project going through political quagmires, funding crises, changing environmental policies, and even the discovery of Indian remains. All contributed to the decades-long time lag in completing the project.

Early on, William J. Rewak, S.J., who succeeded Donohoe as president of the University, offered Going the position of full-time consultant on the re-route—at a pay scale considerably less than what he was making as partner in Ruth and Going, Inc., Architects and Planners. Going was already a fixture on campus since his firm had worked on many SCU projects, including Daly Science Center, Buck Shaw Stadium, and the original Heafey Law Library, as well as its first addition. Since taking the job would impact his entire family, Going consulted with his wife and children first before selling their home, taking smaller accommodations, and beginning a new career. Soon he was firmly entrenched in Santa Clara's transportation issues, guiding the university towards the unified campus we all enjoy today.

As one might expect from a Bronco, Going never regretted his decision to give up a more lucrative career in favor of helping his community. In 1993, the School of Engineering bestowed its highest honor on Jack Going by presenting him with the Distinguished Engineering Alumni Award in recognition of his accomplishments, both in his profession, his community, and in service to the University. 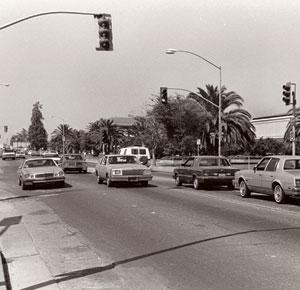 The Alameda used to run through campus. 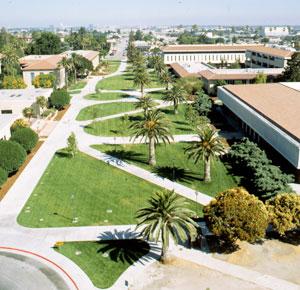 Moving The Alameda allowed the campus to be reunited.