James Bickford '08:
A Passion for Sustainability

James Bickford ’08 joins the ranks of several engineering alumni who have parlayed their U.S. Department of Energy’s international Solar Decathlon experience at SCU into thriving careers in green energy. One month after receiving his diploma and leaving campus, Bickford marched directly into the business world and a renewable energy company that he cofounded with brothers Agustin and Alberto Fonts. According to Bickford, it’s been a swift and rewarding ride.

The passionate energy entrepreneurs—all graduates of the class of 2008—are dedicated to saving the earth through the cutting-edge field of energy management services (EMS). After working on the 2007 Solar Decathlon’s “Ripple House,” the three were part of a team that created the EMS start-up Valence Energy. In 2010, Valence was acquired by Serious Materials, Inc., and became Serious Energy, where the Fonts brothers remain today.

Bickford moved on to another Silicon Valley start-up, Tigo Energy, and, as director of business development, has relocated to China. There, he will work with strategic partners in embedding Tigo’s devices into solar panels at the time of manufacturing. “This effort will revolutionize the way solar power works,” says Bickford. “Sustainability is not a compromise between different factions; it is a partnership, and it has the potential to drastically improve collaboration on a worldwide scale.” 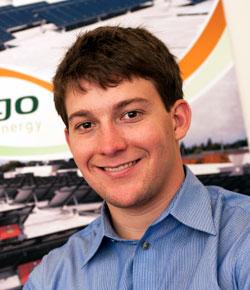