Courtney Davis ’21 is majoring in philosophy with a minor in Communication and a 2020-21 Hackworth Fellow at the Markkula Center for Applied Ethics. Views are her own.

When I applied for the Hackworth Fellowship in the Spring of 2020, I knew that I was interested in researching misinformation and its place in the social media ecosystem. I was particularly interested in the proliferation of fake news on Facebook. At the time, much of this misinformation had to do with the novel coronavirus: “Does hydroxychloroquine actually cure coronavirus?”,  “Is holding your breath for ten seconds actually an effective DIY coronavirus test?”,  “Is it true that the coronavirus can’t survive in colder climates?” I knew that many of these narratives were dangerous and posed a grave threat to the health of information-seeking individuals online. My question was clear: How should we hold Facebook accountable if they fail to remove disinformation from their platforms?

As I began work in September, a lot more was happening in the United States that highlighted the inadequacy of Facebook’s content moderation policies. Widespread racial unrest quieted coronavirus coverage and Donald Trump launched a coordinated disinformation campaign about electoral fraud. I tailored my research questions to account for the new kinds of disinformation populating Facebook News Feeds. I met with Subramaniam Vincent, director of journalism and media ethics at the Markkula Center for Applied Ethics, every Tuesday for the majority of the academic year to discuss issues related to platform neutrality, consistency, and legitimacy. We also discussed problems to do with accountability, free expression, newsworthiness, and nondiscrimination. Because my project revolved around political content, we more or less tracked how Facebook’s policies interacted with the 2020 election and examined the role they played in the January attack on the Capitol.

My first publication summarized several of the ethical problems contained in the New York Post “october surprise” article that circulated on social media last fall. At the time, Facebook was criticized for reducing the article’s distribution on its platform—a decision that was inconsistent with their current policies. My piece focused on answering the question: how can media institutions facilitate the free flow of information and promote the truth during an election cycle shrouded in misinformation? By using the Ethics Center’s Framework for Ethical Decision Making, I considered how the various ethical approaches would address answering this question. My next publication, “Social Media: Why ‘Dangerous Individuals and Organizations’ Policies are not Enough,” dealt with Facebook’s indefinite suspension of Trump’s Facebook account. I argued that their post-by-post enforcement model inadequately defends against nuanced and coordinated incitement campaigns and that a more robust approach to policy enforcement is necessary. Subbu and I also co-authored a submission to the Facebook Oversight Board on this case before a decision was reached. We asked what it would mean to reinstate Trump’s Facebook page and made several recommendations to the board. Specifically, we recommended that the Oversight Board ask Facebook what they planned to change in its design, data, and algorithms that may prevent the harms that led to Trump’s deplatforming from happening again.

Over the course of the past year, my research gravitated toward Facebook’s content moderation procedures. I analyzed their justifications for content removal and identified instances where their decisions were inconsistent with their policies. I also took issue with their enforcement model which insufficiently captures dangerous narratives and patterned rhetoric that does not explicitly violate community standards, but leads to events like the insurrection. The Fellowship greatly impacted my familiarity with these issues and my intent to pursue these lines of inquiry in the future. 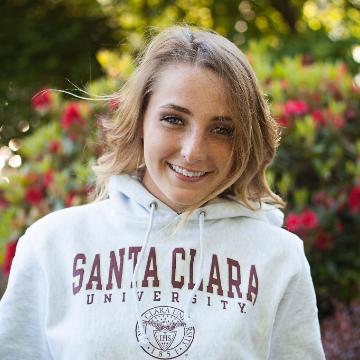 "I am a philosophy major with a minor in communication. I am originally from Washington state, which is where I’ve spent most of my quarantine days. This academic year, I am looking forward to working with the Markkula team as I explore my interest in media ethics and social media company responsibility.

As for my professional aspirations, I have my heart set on Rock and Roll stardom. However, I may settle for a career in journalism. When I’m not studying ethics, I am either playing rugby or music with my friends."