Journalists come together to discuss coverage of anti-Asian racism.

“Covering the Rise of Anti Asian American Racism: Solidarity Approaches to Reporting” brought together journalists, journalism educators, and journalism students. Led by the Asian American Journalists Association (San Francisco) in partnership with the Solidarity Journalism Initiative at the Markkula Center and the Society of Professional Journalists (Northern California), more than 70 participants joined the conversation via Zoom on Wednesday, April 7.

“As soon as we announced the event, registrations started pouring in,” said Anita Varma, Solidarity Journalism Initiative lead and assistant director of Journalism & Media Ethics at the Ethics Center. “There was clearly a need across the journalism community for this conversation.”

Varma, who self-identifies as South Asian American, has led several solidarity journalism workshops previously. This discussion was different, she said.

“After the Atlanta shooting that took the lives of six Asian women, this topic went from increasingly concerning to absolutely alarming,” explained Varma. “We tried to make space for all the dimensions this topic raises: grief, fear, pain – and solidarity. I’m especially pleased we were able to offer space for three fantastic Bay Area journalists in the panel discussion, which was AAJA SF President Cecilia Lei’s idea.” 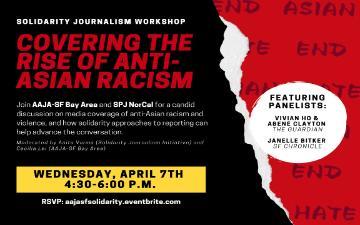 Lei suggested the workshop in February, when anti-Asian racism was being covered with heavy focus on videos of Asian elders being assaulted and shoved.

“As Asian Americans, the coverage of our community members being seriously hurt and killed is personally difficult, but at the same time, it also invigorated the need for many of us to ensure our newsrooms were providing the right context and framing for these sensitive topics ” Lei said.

Then, these three reporters joined Varma and Lei on the virtual stage for a panel discussion on how the stories came to be, how the journalists took care of themselves while covering a distressing topic, and how they think about complex questions related to naming and classifying attacks as “hate crimes” or not.

At the end of the event, Varma and Lei shared a publicly available resource document and encouraged participants to stay in touch with questions, ideas, and comments.

“Our goal was to outline some tangible takeaways for journalists and newsrooms to think more deeply about responsible and empathetic coverage of anti-Asian racism,” Lei said. “Oftentimes that burden falls to Asian American journalists, and that’s why we thought convening this conversation around the framework of allyship and solidarity reporting was particularly powerful.”

The full recording of the workshop is available via AAJA SF’s YouTube channel.