AFTERLIFE LESSONS FROM "THE GOOD PLACE"

The unintentionally Augustinian outcome of the television series "The Good Place."

For some time now, The Good Place has had a special place in my heart. I first discovered it during a campus interview for an academic position for which I was a finalist. Alone in my room the night before the big day, I needed something to think about besides my job talk and teaching demonstration. So I gave it a try and watched the first four or five episodes that night.

It won me over with its initial premise: Eleanor Shellstrop (Kristen Bell), upon dying, learns that the afterlife does indeed involve a destination of either the “Good Place” or the “Bad Place,” and she has been admitted to the Good Place. She quickly realizes, though, that there’s been some sort of mistake: it’s a different Eleanor Shellstrop who belongs in the Good Place, she’s only there by dint of clerical oversight. The show has a gentle, whimsical touch. For example, the Good Place has a language filter, translating Eleanor’s profanities into prime time acceptable near-homophones. It was just what I needed that night. I didn’t get the job, but I left with a new favorite show.

And now, after four seasons, The Good Place has ended. And what a long, strange trip it’s been. Along the way, we’ve discovered that (holy motherforking shirtballs!) it’s not that Eleanor is in the Good Place by accident, but that she, along with her newfound friends, Chidi (William Jackson Harper), Jason (Manny Jacinto), and Tahani (Jameela Jamil) have actually been in the Bad Place the whole time. In a nod to Jean-Paul Sartre’s No Exit — with its climactic line, “Hell is other people” — they’ve been put together in a pseudo Good Place in order to torture each other, in lieu of genital flatteners and anal spiders, torture staples of the Bad Place.

The demonic plan has backfired, though. Under the tutelage of Chidi, erstwhile professor of moral philosophy (one of the show’s persistent delights has been its accurate presentations of moral philosophy, from Aristotelian virtue to Kantian deontology), the crew has begun getting better, showing that it is indeed possible that humans — even apparently irredeemably bad ones like a toxically indecisive academic, an inveterately name-dropping socialite, and a couple of “dirtbags” (in their Arizona and Northern Florida varieties) — can attain some moral improvement.

Eventually it becomes clear that the afterlife is broken. The world has gotten complex enough that it’s impossible for anyone to make it into the Good Place. And so, in a final gambit, the team completely redesigns the afterlife, essentially transforming the Bad Place into purgatory. Gradually, but surely, people are able to learn their lessons until they are ready to enter the Good Place.

Having essentially saved humanity from hell and destruction, Eleanor, Chidi, Tahani, and Jason are themselves finally brought to the real Good Place, only to discover that it, too, is broken. As it turns out, endless hedonism winds up sapping the vitality out of existence. Their solution: reintroduce an element of mortality into the afterlife. It is the prospect of our death that imbued our lives with significance, they reason, and so they offer a sort of cosmic death. A door is created: go through it, and your existence is at an end. It will be peaceful; it will be final: cosmic euthanasia.

For a time, it suffices to know that the door is there. The afterlife is, again, meaningful. Eventually, though, after enough Jeremy Bearimys, the group, one by one, realizes that they’ve nothing left to do. They’ve accomplished all there is to accomplish, and even meaningful loving relationships are not enough to keep them this side of the door. It is time to pass through. Sartre is reversed. There is indeed an exit. And, with the exception of Tahani, who opts to become an apprentice architect, designing afterlife neighborhoods, they all take it.

It’s a poignant conclusion, watching as each character reaches the end of his or her arc.

When they first introduced the door, at the end of the penultimate episode, I was horrified. Surely this could not be the solution. And, yet, as I watched the finale, I had the realization: this is the best resolution that can be achieved in a premise that doesn’t include God. Allow me to explain.

In his famous work, On Christian Teaching, St. Augustine makes a distinction between things that are to be used and things that are to be enjoyed. Objects for use enable us to attain some other thing, while objects for enjoyment exist for their own sake. In the end, it is only the Trinity who can properly be enjoyed, because only the infinite, unchanging God can satisfy us everlastingly. All other things are here for us to utilize as we make our journey back to our true homeland (God), where alone we can be truly and eternally happy.

Augustine’s basic thesis has been subsequently developed by Thomas Aquinas and, in the 20th century, by Henri de Lubac. We have a natural desire for a supernatural happiness, which can be satisfied only in God and received only by the gift of his grace. The beatific vision alone can sustain human happiness for eternity.

From the outset, The Good Place was not going to give us the beatific vision. The initial set up told us that no one really gets it right about the afterlife. The closest anyone ever got was during a mushroom trip. So a Christian resolution was right out from the start. That notwithstanding, there is a certain, assuredly unintentional, anticipation of the Augustinian position in the show’s denouement.

In an afterlife without God, even one with such meaningful relationships as those forged by Eleanor and the gang over the 802 reboots and 300 years that led them to the Good Place, it is only a matter of time before the ennui of being sets in, and we realize that there’s nothing left. Alexander wept because there were no more worlds to conquer. If, in the end, all that we have to enjoy are objects of use, eternity becomes an unbearably long time.

From the outside looking in, it perhaps seemed so soon for these beloved characters to take their leave of existence. We’ve known them for only four years, about 19.5 hours of runtime. Their tenure in the Good Place amounts to 3,230.52 Jeremy Bearimys: a literally incomprehensible duration. As characters take leave of one another, they, without reservation or hesitation, express their love for one another. But this love, profound as it is, with all the history that it has, is insufficient to sustain the weight of eternity. We get, then, another inversion of Sartre: hell is other people, yes, and as it turns out, heaven cannot be.

Much as we might find real pleasure in the journey, in the end, the journey cannot be our destination. Much as they came to love one another, Eleanor and Chidi cannot find their ultimate happiness and fulfillment in each other, or in anything else this side of the door. Something more is needed. Something that cannot be found within the confines of the universe. The true homeland lies beyond.

It is no indictment of our earthly loves that they cannot sustain eternal joys.

It is also no indictment of The Good Place that it doesn’t end with Eleanor before the throne of God, transfixed by the divine beauty.

It is, instead, something of a triumph that the show does not settle upon any immanently attainable means of reaching eternal happiness as its solution. Anything short of our consummation in God will inevitably fall short.

We could not have expected The Good Place to provide us with ultimate answers, for they are found only in God. The best any of us can hope for is to be helped along the way as we journey towards that true homeland, and to help others along the way.

And with its final door, The Good Place proves useful for our journey once more: we cannot stop here, we must journey on.

But the eyes of faith trust that beyond the final door it is not the loss of our personal being within the ocean of an impersonal universe that waits, but rather the loving God for whom we’ve longed all along, even when we didn’t realize it, in whom our restless hearts can finally find their rest. 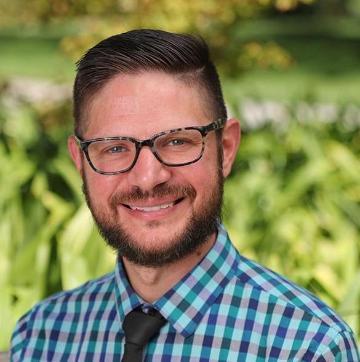