Let's wonder together about motion and speed. A student sat in my office recently and asked how fast she was really moving. A great question, or...

Are you a physicist? Unless you are employed as one, you might be tempted to answer “no.” But let me ask another question: Do you look around the natural world and wonder? Wonder why things work the way they do, why things are the way they are? If you do, then there’s a bit of physicist inside of you! Physics is all around us.

So first, Santa Cruz. Because she was sitting in my office, right over the hill from Santa Cruz, you might be tempted to answer “zero.” That’s not the case. The Physics Building at Santa Clara University is planted on the North American tectonic plate; Santa Cruz, off on the other side of the San Andreas Fault, sits on the Pacific Plate. Earth’s outer crust is made up of seven large, and many smaller, separate chunks or “plates.” Because they float on molten rock inside Earth these plates move relative to each other. A sudden motion of one plate relative to an adjacent one is the underlying cause of an earthquake. The Pacific Plate moves an average of about five cm per year to the northwest relative to the North American Plate. A speed of 5 cm per year is about 3.5 billionths of a mile per hour. Not very fast, but not zero.

The Physics Building is also firmly planted on Earth, so it moves in a circle as Earth rotates around its axis each day. Can you notice that motion? Yes! The sun and stars rise in the east and set in the west because Earth is turning. For my student (and everything else on Earth’s surface) to get all the way around once in 24 hours, she must be moving about 750 mph relative to the North Pole, which is on one end of Earth’s rotation axis.

Earth revolves around the sun at a distance of about 93 million miles, making one complete trip in a year. So each year Santa Clara University travels about 600 million miles as Earth orbits the sun. That’s a speed relative to the sun of about 70,000 mph. You think that’s fast? How about our velocity around the center of the galaxy? Although it takes a long time for the Milky Way to rotate once (about 240 million years) our solar system is pretty far from the center of the galaxy. One trip around for us is about a billion, billion miles, making our solar system’s speed relative to the center of the Milky Way galaxy around half a million mph! And wait - our Milky Way galaxy is part of a cluster of galaxies, which in turn is part of the Virgo Supercluster, a cluster of galaxy clusters. The velocity of our “local” cluster relative to the center of the Virgo Supercluster?  Almost 1 million mph. 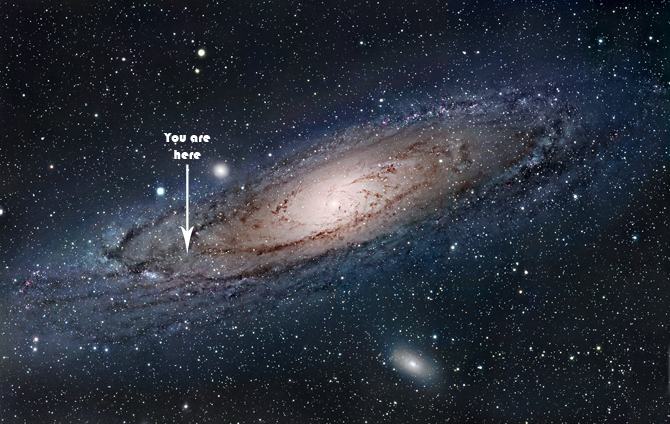 Traveling up Highway 280 from Santa Clara (don’t forget to look to your left up around San Mateo, so you can look down on the San Andreas fault!), you can tell you’re moving by watching trees and buildings whiz by.  If you were in a spacecraft in empty space, how could you tell whether you were moving at constant speed or not moving?  Noting that every reference to speed in this article is actually a reference to “relative” speed, is this at some level a trick question?

The bob of a pendulum swings back and forth in a straight line. In 1851 the French physicist Jean Bernard Léon Foucault demonstrated that when a heavy bob is suspended at the end of a long wire, the bob appears to slowly change direction. Foucault explained this apparent motion as a consequence of Earth’s rotation. (You can find a Foucault Pendulum - one that is nearly as big as the one Foucault built in 1851 - just a stone’s throw from the Santa Clara campus, in the Rosicrucian Planetarium). When the pendulum swings,  which is moving, the direction of the swing or Earth’s surface? Noting that every reference to speed in this article is actually a reference to “relative” speed, is this at some level a trick question?

The Pacific Plate moves an average of about five cm per year relative to the North American Plate. But this is an average - there are many years in which little or no motion occurs. An earthquake results when the plates move one relative to the other. Frequent, small temblors are a bit unnerving for residents of California and other earthquake zones.  It may be, however, that small quakes have beneficial side effects.  Can you think of any?