The National Oceanic and Atmospheric Administration estimates that there are more than 80 thousand lightning strikes over the continental United States...

“It was a dark and stormy night.” (Quoting the 19th century English novelist Edward Bulwer-Lytton, and also, Snoopy from the Peanuts comic strip.) Suddenly the sky is split asunder by a knifing flash, followed by a low, building rumble. Let’s wonder a bit about the physics of lightning.

The National Oceanic and Atmospheric Administration estimates that there are more than 80 thousand lightning strikes over the continental United States every day. Worldwide, that amounts to about 1.5 billion strikes a year. A typical bolt carries hundreds of millions of volts (the electrical voltage in your house is likely 120 volts) and can raise the temperature of the surrounding air tens of thousands of degrees Fahrenheit. Wow! What’s going on?

Put simply, lightning is the massive flow of electric charge between the clouds and the ground.

Everything contains electric charges. Every nitrogen atom in the air, oxygen atom in water molecules, and cell in your body contains positively charged protons and negatively charged electrons. Under most conditions, the amounts of positive and negative charges exactly balance. Most things—you, for example—are electrically neutral.

But electrical charges can be pulled apart and, sometimes, charges which have become separated can be pulled away from one thing and end up on another.

Like charges repel each other. The excess negative charge in the lower layers of the clouds pushes down negative charges on the Earth’s surface. This makes the surface and everything on it—trees, buildings, and you!—to become positively charged. And that’s when the real excitement begins.

The negative charges along the bottom of the clouds are attracted to the net positive charge down on the surface. Charges begin to flow down toward the ground, following wildly zig-zagging, branching paths. 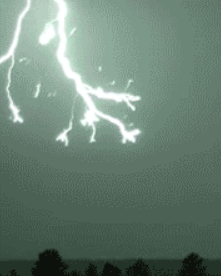 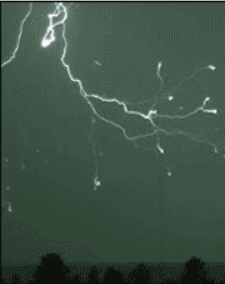 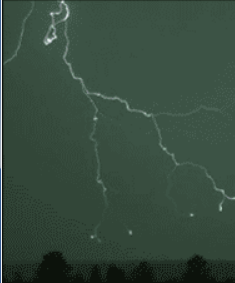 As these negatively charged “step leaders” approach the surface, positive charges are drawn upward. Eventually one of the rising “streamers” encounters a step leader. At that instant, a single, direct path is established for charge to flow between ground and cloud. Billions upon billions of electrical charges move along it in less than a thousandth of a second. That’s lightning! 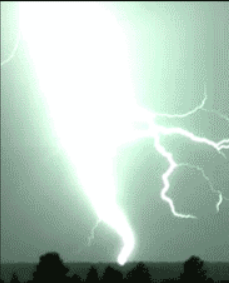 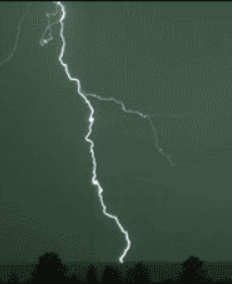 The rapid motion of a charge in a bolt of lightning carries an enormous amount of energy—the energy of a typical bolt could run an average American household for nearly a week. All that energy causes the temperature of the surrounding air to rise—and to rise so quickly that the heat can’t be immediately dissipated. The pressure in this region becomes incredibly high, resulting in sonic shock wave that expands in every direction. Boom-thunder!

The light from a lightning bolt reaches your eyes almost instantly, but it takes a while before the sound of thunder gets to your ears. Sound travels at the (relatively) low speed of about 1 mile every 5 seconds, or about 1 km every 3 seconds. You can estimate the distance to a lightning bolt by counting off seconds—“one Mississippi, two Mississippi”— between seeing the light and hearing the thunder: the distance is roughly 1 mile for every 5 seconds that you count, or roughly 1 km for every 3 seconds.

Lightning is spectacular, but sometimes it’s really spectacular. Check it out: 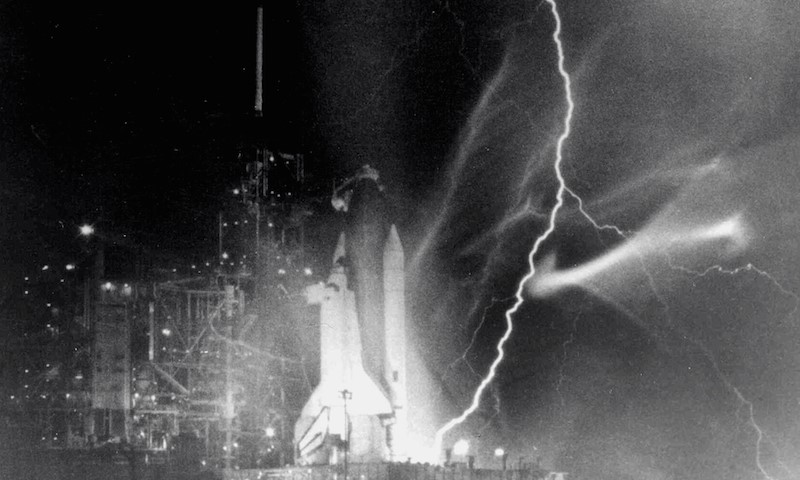 Fulgurites are somewhat generic variety of mineral, often composed of fused silicates, similar to glass. The name comes from the Latin fulgur, which means lightning. Can you guess how fulgurites are formed?

Are you surprised that the bolt of lightning doesn’t strike the top of the space shuttle in that last image?