How Technology Gets Every Student in the Class Involved

There are two classroom issues that pose challenges for even veteran teachers: Keeping the students engaged and interested in the lesson at hand, and trying to assess, as the class period goes on, whether or not they’re understanding the material presented.

John Ifcher, Assistant Professor of Economics at the Leavey School of Business, has been in the vanguard of business faculty in using a new technology, the iClicker, to track student performance and increase participation in a required class, in his case Economics 1. The clicker allows students to sign in for a class session (as opposed to the instructor taking roll) and respond immediately to spot questions, giving Ifcher a sense of where they are in terms of knowing the material.

“It’s valuable to me to know what the students do and do not understand,” Ifcher says. “If I ask a question and half the students give the wrong answer, I know I need to clarify, and often it can be fixed with not much work.”

The clickers are blue and white plastic devices similar to the remote control unit on a television, but smaller. Each one has its own serial number and is registered with the student’s email at the beginning of the quarter. They’re required for the class and cost $31 new and as little as $7 used.

A small receiving device, about the size of a modem, records answers when students are asked to respond. Questions can be yes-and-no or multiple choice with up to five choices. The yes-no option is particularly valuable, Ifcher says, for taking a spot poll of student opinions before beginning to discuss a subject, even in a relatively small class. (Economics 1 typically has no more than 35 students.) 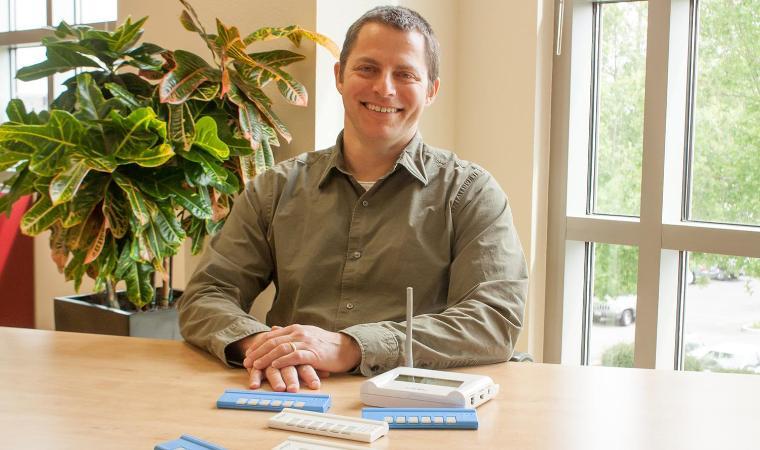 “Without the clicker I could ask for a show of hands or cold-call on some students, but you get a much more limited student response that way,” he says. “I’ve found that students are not reticent to click an answer, even if they’re reticent to raise their hands.”

One of the things Ifcher has found about clickers is that they’re not necessarily for every class and that if an instructor is going to use them, he or she has to integrate their use into every class session, rather than merely using them two or three times in an academic quarter. That requires a considerable degree of work on the instructor’s part to set up the class so that the technology is smoothly incorporated.

For Economics 1, clicker use begins when students walk in the door. They click present, and their email address pops up on a screen at the front of the room. Ifcher will then do a spot quiz on the assigned reading or recent instruction, asking a few questions and reviewing the clicked responses.

“In just two or three minutes, I’ve taken attendance and ascertained that they’ve done the reading,” he says. “If it’s an eight o’clock class, I’m ready to start teaching by 8:04, and students are more likely to show up on time when they know there’s a quiz.” He then continues to use clickers throughout the class session, as needed. This is the third year Ifcher has been using clickers in his classes (though not all of them), and the university’s media services department has designated him as a faculty point person for the technology — someone other instructors can talk to about it.

“John definitely has been one of the leading business faculty in using technology in the classroom,” says Gloria Hofer, SCU Instructional Technology Resource Specialist. “But it is the meaningful integration of technology into his teaching practice in ways that foster student engagement and active learning that stands out.”

Ifcher says student responses have changed since he initially introduced clickers to his class. “When I first used them, there was more concern from the students, but now I’d say there are more positives than negatives in the feedback,” he says.

ANSWER AT THEIR FINGERTIPS: John Ifcher uses clickers like the one he’s holding to get immediate student feedback and test answers in his Economics 1 class.

Christina Chow, who took Economics 1 in the spring of 2013, says she was initially apprehensive about the clickers but quickly became a fan.

“My apprehension turned into appreciation very quickly,” she says. “It’s probably the most simple, straightforward, and time-efficient (not to mention environmentally efficient) method of quiz-taking. I’m now a huge advocate of the clicker, not only for the aforementioned reasons, but because the students receive feedback on their performance immediately.”

Henry Spivey, another Economics 1 student, says the clicker adds an element of intensity to the class experience. “I feel like a game show contestant entering my answer,” he says. “I am engaged and ready to answer questions on the new material.”

Santa Clara University has made the iClicker an approved technology, and any professor who wants to try one out can get up to 40 loaners for a classroom. Ifcher expects that its use will grow, and he isn’t about to stop using it in his own courses.

“Clickers are an important component of my attempt to use active learning strategies in the classroom,” he says. “Clickers really do create a higher level of student engagement and accountability.”