The Keeper of the Mountains

"I’ll tell you what. I'm not collateral damage. I am not a victim ... I am somebody. I am just as good as anyone. I deserve the same quality of air and health that everyone does that lives away from the coal fields." - Larry Gibson [2]

Between West Virginia, Virginia, and Kentucky, over 500 mountains have been destroyed due to a practice appropriately called mountaintop removal [2]. Larry Gibson, who stood just under 5 feet tall, refused to sell his property despite being offered exorbitant amounts of money by eager coal companies. Years of confrontations then ensued.

Around 1980, Gibson was forced to retire from his job at General Motors due to a work injury. After having spent the majority of his life in an urban town in northern Ohio, Gibson decided it was time to return the 60 acres on Kayford Mountain that his family had owned for over 230 years.

Located near the town of Dorothy, in Raleigh County, Kayford Mountain is part of the 450 million year old Appalachian range. During the late 1700’s, the Gibson family lived at what was the lowest point within their view and could look up at the surrounding peaks. In 1986, one of the most destructive mountaintop removal projects began, destroying more than 7,500 acres of previously pristine land [3]. Their surrounding mountains began to disappear.

The mining companies offered to buy Gibson’s land. Instead of selling-out to the interested coal companies, Gibson used the publicity of his struggle in order to foster a sense of environmental concern in his community. Due to efforts of the Keeper of the Mountains Foundation (an advocacy organization founded by Gibson), the land was designated as a public park via a land trust and turned into Stanley Heirs Park [2] Now, groups of visitors including those led by nationally renowned musician and activist Tom Breiding, can experience the “true and poignant view of this extreme extraction process" [4]. 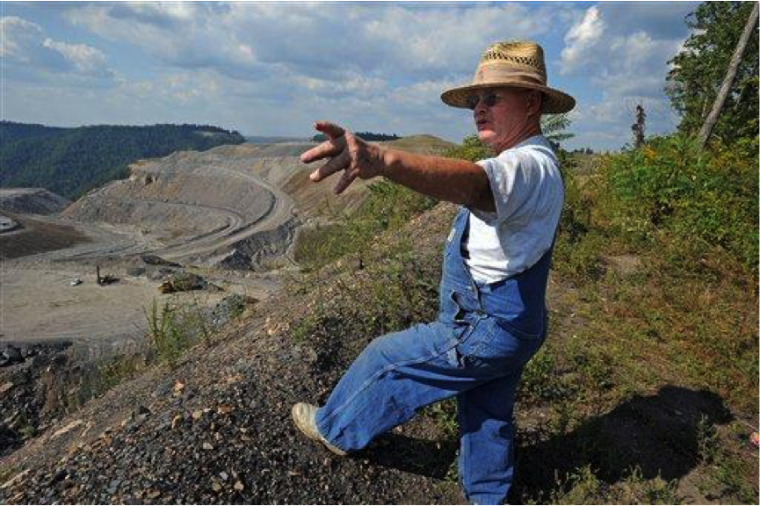 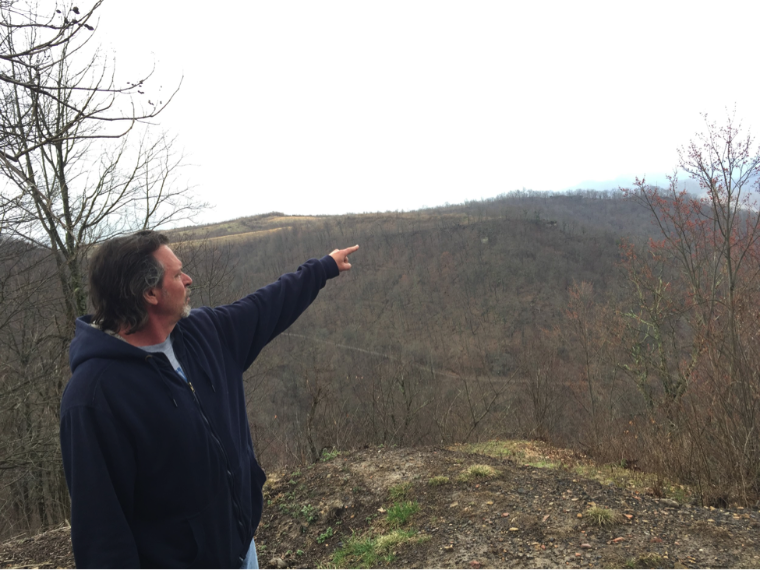 “Larry Gibson's efforts began the anti-MTR movement. Kayford Mountain is ground zero for the anti-MTR movement and for efforts to reverse climate change. Larry touched people worldwide, speaking at the United Nations and around the world on behalf of West Virginians affected by this extreme method of extraction. His legacy is the Keepers of the Mountain Foundation which continues to work towards Larry's goal of stopping MTR. (4)

As coordinator of immersions at the Appalachian Institute of Wheeling Jesuit University, Breiding helps guide student groups through the region and educate them on the complex web of factors that play into these issues such as a lack of economic diversity and educational opportunities. On his tours, few words speak louder than the first-hand experiences such as standing atop Kayford and seeing bare dirt where there used to be an abundance of life. If the visual shock of plateaued mountaintops does not sufficiently disturb the visitors, the bullet holes decorating the side of Gibson’s trailer home likely do. Adjacent to the trailer sat (and still sits) the two-room cabin that Gibson built for himself and his wife. In order to intimidate Gibson and his cohorts, industry collaborators would threaten them inhumane tactics including shooting at his his home and dogs, and even hanging one dog, leaving it to die. And yet, over time additional family members joined Gibson and built their own humble abodes atop the mountain. Each home stands as a statement of solidarity and courage against the constant threats of invasion and destruction. 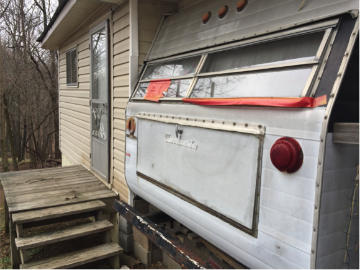 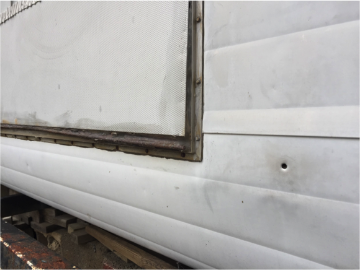 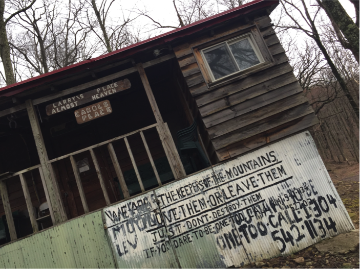 Bullet holes can still be seen on the surface of Larry’s trailer home situated in Stanley Heirs Park. Later he moved into a cabin, upon which words read “Love Them or Leave Them Just Don’t Destroy Them” [6]

”I remember when they started mining here. It was a fine day: pretty sky, no clouds. All of the sudden I heard thunder in the distance. Couldn’t see no clouds, but we heard thunder. That was in spring of ‘86 … By the fall of 86’, it was upon us — we could see the dynamite explosions and we were breathing in their dust … Then by the spring of 87’, we could taste it in our mouths.” - Larry Gibson [7]

Mountaintop removal is a multistep process with innumerable consequences at each level. After analyses of the geological contents of the mountains, the process of extraction begins by clearing the surface topsoil and vegetation. Given the quick turnaround needed to meet the fluctuating demand for coal, lumber from the site is not always sold but sometimes burned or dumped. Next, in order to reach the seam of coal, explosives are used to blast the top layers of land creating visually astonishing damage, especially compared to more discrete underground mining. The type of coal found at these seams has relatively low sulfur contents which is much more attractive to the market than the high-sulfur coal attained deep underground. Giant machines called draglines, which can be up to 20 stories tall and weigh many tons, remove the displaced earth and eliminate the need to pay the salaries of costly miners [8].

Waste earth is then removed through a variety of methods. Unfortunately, the legal means of disposal can cause as much damage as those that are officially deemed illegal, such as dumping into streams (a violation of the Clean Water Act). For example, valley-filling is one such practice where waste from explosions is dumped into valleys creating artificial height, and eventually a plateaued range. Rivers that trace the curvature of the valleys are simultaneously covered therefore cutting off water sources to everybody and everything downstream.

Before being shipped to power plants to burn, the coal is treated with chemicals, thereby creating a toxic slurry that some companies illegally dump into waterways or use to fill entire slurry ponds (which resemble lakes) [see image below]. In order to justify the continued use of dangerous methodology and comply with the 1977 Surface Mining Control and Reclamation Act, coal companies claim to refurbish the land through a process known as reclamation. While it implies returning the land to its pre-extraction state, reclamation can mean spraying non-native grass seeds onto dirt, creating a surface layer of turf that inhibits healthy growth and renewal [9]. Appalachia, which is considered “one of the most diverse assemblages of plants and animals found in the world’s temperate deciduous forests,” is under intense attack due to the expansion of mountaintop removal [9]. 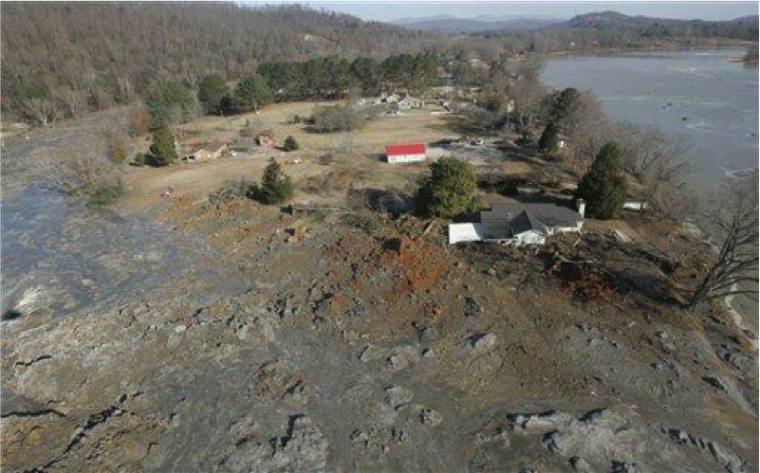 In December 2008, a retention wall failed at the Tennessee Valley Authority's Kingston 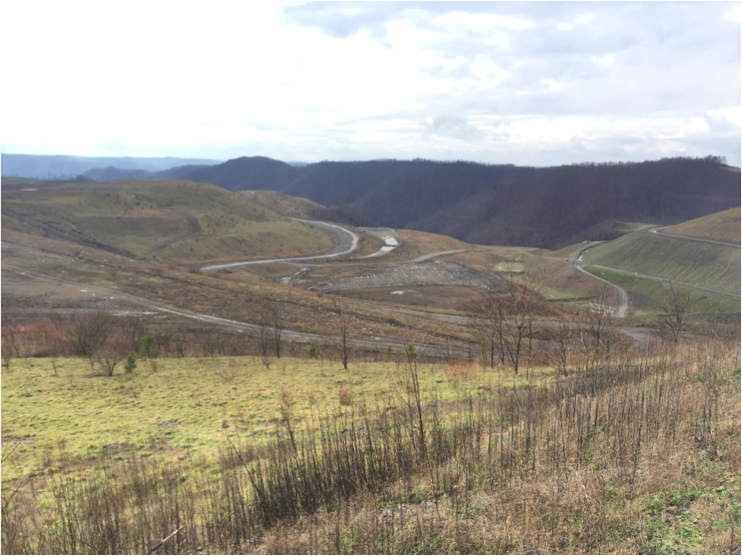 Fossil Plant, in Harriman, Tenn, causing the flooding of a 40 acre pond holding slurry ash [10]. An example of technically “reclaimed” land, overlooking Kayford Mountain. Prior to mountaintop removal, the foreground mountain was taller than the range behind it, and also covered in the same dense forestry [6].

”There’s not enough money that’s been printed or made that can buy this place. There are some things money shouldn’t be able to buy.” - Larry Gibson [7]

A number of organizations have taken action to combat the issues stemming from mountaintop removal. Keeper of the Mountains Foundation, established by Gibson, still continues to spread awareness both inside and outside of the state [11]. The Center for Coalfield Justice, a non-profit based in Washington, Pennsylvania, is an advocacy organization with a team of environmental activists and lawyers working to empower the community members most impacted by mining practices and industry exploitation [12]. What started as a reactionary grassroots effort morphed into one of the most powerful environmental movements in the region. In an area already struck with a tremendous mess of social and political injustices, Larry Gibson fought for his land and his people.

”Some Native Americans believe we should think seven generations ahead. When you look out on this site, it’s clear we haven’t done that.” - Larry Gibson [7]

According to the US Census Bureau, approximately 17.9% of West Virginians live in poverty compared to a national average of 13.5% [15]. Life expectancy continues to drop in the region as it’s aggravated by factors such as smoking, high blood pressure and obesity [16]. West Virginia has the highest rate of drug overdose deaths in the nation. In September of 2016, one in ten babies born at Cabell Huntington Hospital experience drug withdrawal upon birth, which is 15 times the national average [13]. Of the 410 counties in Appalachia, 48% are considered either “Distressed” or “At-Risk” meaning they rank between the worst 10-25% of the nation’s counties. Less than one percent ranks in the best 10% [14].

Despite these systematic barriers, many people in West Virginia call it home for a reason. Beautiful natural landscapes and rich cultural traditions shape a region that is unlike many other parts of the United States. As stated by American author and historian Jeff Biggers, “you can’t understand America until you understand Appalachia” [17]. Larry Gibson, who died on September 9th, 2012 at age 66, dedicated his life’s work to honoring that idea by sharing his own wisdom and allowing the mountains to share theirs. 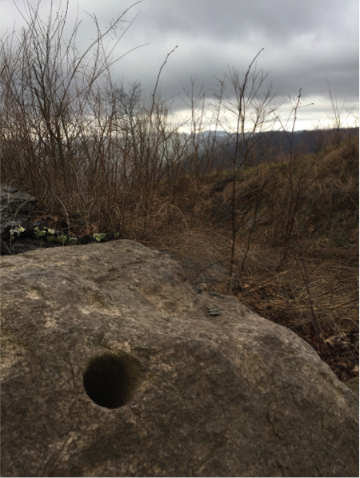 A leftover hole from dynamite, in a rock that was potentially launched from a nearby mining site, sits in Stanley Heirs Park. [6]

Larry Gibson at a rally in January 2011 at the Capitol in Charleston, WV in response to U.S. Environmental Protection Agency actions. [1]