Hersh Shefrin has made a career as one of the pioneers in the research of behavioral finance — the ways in which psychological pitfalls like overconfidence and excessive optimism can distort financial and business decisions. To help students learn to deal with these potential traps in the course of running a business, he’s come up with an alternative, hands-on teaching approach which the Mario Belotti Professor of Finance says demonstrates these dangers and how to avoid them.

Using a computer program he created, called EnviroStuff, Shefrin simulates running a Silicon Valley business in a competitive environment. In his Finance 180 class, Open Book Management, students break into teams that compete against each other by running virtual clean-tech startups. Students don’t merely try for a grade; they try to fight pitfalls as they work to make critical business decisions. The most competitive strive to be on the team that ends up as the “gorilla,” the dominant player in the business game.

Open book management is the concept that companies open a key portion of their financial records to managers, in order to provide them with the information and tools to make value-creating business decisions. It has worked well at many companies, and one of its benefits as a practical application is that it forces managers to become knowledgeable about using basic finance and accounting to make sound business decisions. 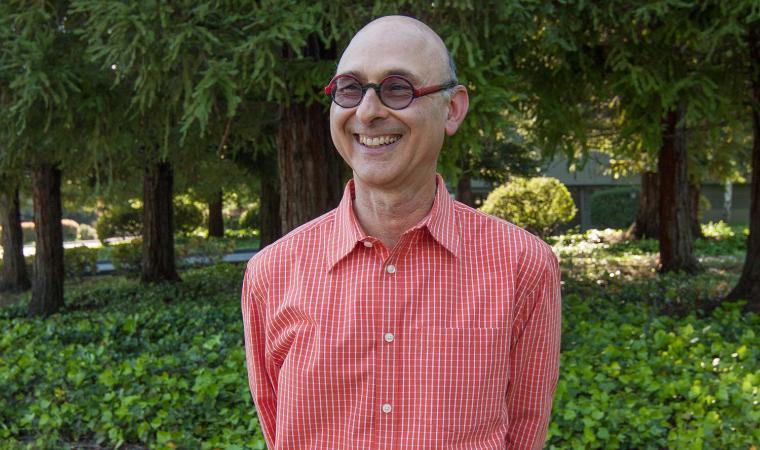 Above: Hersh Shefrin is a leading scholar in behavioral finance.

At the beginning of the class, students are broken into teams of five, with each team running a virtual clean-tech company making the same product. Each team has a Chief Executive Officer, who coordinates and integrates the work of the other four students, who are Chief Financial Officer, Chief Marketing Officer, Chief of Human Resources, and Chief Operating Officer. A key aspect of the class experience is developing a sense that it isn’t enough for a manager to know only his or her specialty. Everyone has to see the total picture.

All teams begin with the same amount of seed money and other business conditions. Students must not only execute a sound business strategy within those constraints, they also must deal with what Shefrin calls “Monte Carlo variables.” Those are unplanned outside occurrences (such as a dramatic change in raw material prices) to which each virtual company must adjust.

“Each team has to put systems and processes into place to deal with problems,” Shefrin says. “They have to figure out what matters, and whether something new that comes up is a fluke or a trend. Most of the time it’s a rough and rocky road.”

Shefrin says the four critical elements in being able to respond to circumstances are having good goals and standards in place; good financial planning and budgeting; structuring employee incentives wisely, and sharing information.

The class begins with sessions on skill-building, drawing on several books, including Shefrin’s own Ending the Illusion of Management. After a few weeks, the teams prepare mock contract bids using the EnviroStuff program, which is unforgiving if any errors are made. In the last five weeks of the class, the teams submit a bid each week, representing a year’s worth of business. Contracts are awarded based on the quality of the bids, and the teams begin to see how they stack up against each other. It gets interesting.

“There’s great anticipation and a high level of emotional arousal,” Shefrin says. “They’re in game mode. They want to win.” A paper turned in by one of the groups describes the emotional level this way: “After going valid in the mock bid, and then producing two invalid bids when it counted, we were ready to punch our computer screens.”

“As it turned out, that team emerged as the “gorilla” by the end of the class, bringing in the most business and winning the game. It was able to do so by executing a mid-course correction based on a hard look at the numbers and at bringing the assets it had developed into harmony with its strategies.

Noah Rickling, head of that team, spoke highly of the class and its process. “Having the feeling of ownership in a competitive project, allowed my team and me to invest significant time learning how the theoretical practices we’ve studied work out in a situation that’s as close to the real world as we can get while still being in school.”

Above: Hersh Shefrin (at left, standing) works with Christian Workman and his team on the virtual company they run using open book management principles.

The winning team had no monopoly on learning. Christian Workman, a student on one of the other teams wrote about the behavioral finance lessons he learned. “Managers who are overconfident or excessively optimistic oftentimes make poor decisions that don’t add value to the company. Instead of making sound decisions off the numbers, they take ill-advised chances that destroy wealth. In playing EnviroStuff, we experienced this first-hand as managers of our own company.”

To strengthen the connection to real companies, Silicon Valley executives such as clean-tech CFO David Bostwick and LinkedIn CFO (and former student) Steve Sordello provided guest presentations during winter quarter 2013, enabling students to compare their own experiences in the game with those of their real-world counterparts.

Shefrin has been teaching and tweaking this class for several years and would like to see this type of simulation teaching become more widely used in business schools everywhere. “I’m trying to do for business students what airlines do to train their pilots. Airlines put pilots in flight simulators to simulate real flight conditions accurately, including the pilots’ emotional states. We need to do the same for business decision-making.”