Vas Kumar ’21 is a sociology major and a 2020-21 Hackworth Fellow at the Markkula Center for Applied Ethics. Views are her own.

In 2018, London launched efforts to support a new generation of streetlights that also served as air quality sensors and cameras. In Rio de Janeiro, garbage truck routes are coordinated using GPS so trucks can be repurposed for other tasks. The City of San Jose uses advanced traffic technology to optimize response times for first responders. What connects these projects that are spread across the globe? The concept of “smart cities.”

Although there is no universal definition of smart cities, generally the term is used to refer to cities that use advanced technology to support municipal governance. Usually, this technology relies on sensors that can measure air pollution, energy use, noise levels, and traffic, among other things. Smart cities also utilize the Internet of Things, or IoT, which refers to the millions of devices spread across a city that are connected through the internet. Smart cities are said to be the future of urban development. But they are not just a thing of the future anymore; smart cities are already taking the world by storm. There are hundreds of smart city projects in development around the world, with the global smart city market valued at more than $500 billion already.

So all of this sounds great, you might say. The combination of technology and urban development will revolutionize our lives. And yet, there is a growing backlash against smart cities. Most notably, Sidewalk Labs, a project to “revitalize” downtown Toronto spearheaded by Google’s parent company, Alphabet, was shut down after years of local resistance. What is sparking this resistance? As a Hackworth Fellow, I reached out to residents and activists in San Jose to understand how they view smart cities, and in particular, smart city programs in San Jose. None of these people are experts on issues of technology, but as BIPOC, they are the least heard from yet the most impacted, so my project sought to learn from and uplift their voices.

In my conversations with six San Jose residents, I learned that smart cities are ripe with mechanisms that reinforce social inequalities. For the most part, residents are concerned about partnerships between city governments and private tech companies that prioritize monetary interests while tracking and collecting data about their daily activities. One resident described the elected government of San Jose as “basically the same as the multinational tech firms--because who really has the power in that relationship?” Another was concerned about “backroom deals” between governments and tech companies that are shrouded in a lack of transparency and accountability.

Beyond trust and transparency, residents are also concerned about racial inequalities in smart city projects. All six of the residents I spoke with expressed worries about predictive policing. Predictive policing refers to the use of algorithms to analyze crime data to predict and prevent future crime. However, there is growing evidence that predictive policing reinforces racial disparities as algorithms rely on historical crime data that is racially skewed. In light of the Black Lives Matter protests of 2020, one resident said that such uses of technology “allow an already oppressive state to reproduce itself even further.” Another resident told me, “The bigger question isn’t smart cities, yes or no. It isn’t predictive policing, yes or no. It’s why would this be on our top-ten list of priorities in a city where one out of three public school students is literally homeless.”

So what do we do? Given decades of distrust against advanced technology projects in marginalized communities, it is the responsibility of municipal governments to rebuild these bridges. One way to do this would be to increase transparency. City governments should not only seek out public feedback but also genuinely listen and learn from it. A push toward increased transparency must also create accountability systems that allow residents to learn what types of technology tools are being used and the ways in which they are used, with frequent public audits to ensure equitable outcomes. In line with the Defund the Police demands of last year, city governments should revisit advanced technology used by law enforcement. They should re-allocate these resources to address the systemic roots of crime, like education, mental health, and housing.

Instead of programs like predictive policing, smart-city development should begin with relatively uncontroversial programs that serve all residents. Technology tools to support public wi-fi, improved public transportation, and, as one resident suggested, food insecurity and self-sufficiency are examples of programs that can earn residents’ trust for advanced technology. By putting the concerns of working-class people of color at the forefront of our agenda, we can build truly smart cities that allow all of us to live better and freer lives. 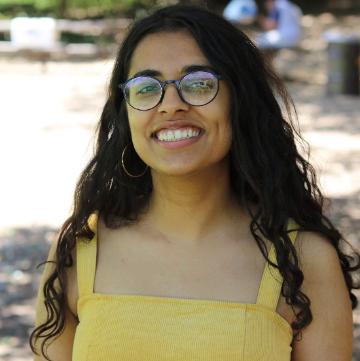 "I’m a student of sociology who grew up in transit between a small town in south Asia and an island nation in the Persian Gulf. Immigrating to Silicon Valley has inspired me to pursue a deeper understanding of internet and technology ethics,  as technology designed locally has dramatic consequences for communities across the world. Specifically, I’m interested in the neoliberal, imperialist, and racist roots of mass surveillance, and ethical frameworks provide useful tools to analyze the role of tech companies and government institutions in surveilling and harming marginalized peoples.

Besides surveillance studies, much of my interest and free time revolves around labor, housing, and migrant justice across borders. I'm currently also working with SCU faculty on projects about social justice pedagogy and knowledge inequalities. When I’m not stressed about racial capitalism, the surveillance state, and the neoliberal university, I enjoy cooking, learning to code, and riding my bike."