Zachary Heffron ’22, majoring in management, is a 2020-21 Hackworth Fellow at the Markkula Center for Applied Ethics. Views are his own.

The COVID-19 pandemic radically changed our society as jobs, education, commerce and communities shifted to a socially-distanced world. But one group seemed more inclined to go on with business as usual. College students were thrust into online classes, graduations were made virtual and in Spring, Summer, Fall, Winter and Spring again college traditions were interrupted and many felt cheated out of the "best four years of your life." Universities across the country became epicenters for local outbreaks as classes and parties continued. A New York Times database tracked Coronavirus cases across campuses and estimates the total cases on campuses above 660,000.

Santa Clara University did not escape these issues, in fact, the school had a per student case rate at 1 case for every 10 enrolled undergraduates (528 total cases according to the NYT database). During Winter quarter 2021, SCU saw a large rise in cases that coincided with large parties and increased gatherings at off-campus housing and implemented restrictions that doled out serious punishment for further violation of COVID-19 safety protocols. But before punishment enticed students to respect the restrictions, why did many go on living their college experience as if the pandemic didn't exist?

This year, I returned to my off-campus house on the quiet side of campus (known as darkside) and consistently felt anger and disappointment seeing other students and my friends host or go to parties with no regard for the tragedy unfolding around the world. For my Hackworth project, I hoped to understand why college students did return to 'normal' school year behaviour and if they considered the consequences that their actions would have on those around them. I interviewed students about how their life evolved this year and how many of them came to make the decisions they did; digging deeper into an individual's ethical decision making framework built for the lives and experiences they led.

I found that many students did not act without thinking as I and, understandably, many around our community thought was the case. However, it became obvious to me that the priorities of other age demographics were different than college students. The first stark difference is that in the sample of students I interviewed, zero expressed any concerns about their health if they caught the virus (half of the interviewees contracted COVID-19 during the year, one student had COVID-19 twice). While many adults were concerned for their health, younger adults had shown more resilience to the disease and many students took this, rightly or wrongly, as an indication they were safe from serious infection. However, fear of transferring the disease to another, especially someone more susceptible, substituted for students' lack of concern for their own health. Every student I interviewed felt concern about carrying and transmitting the disease because of the care they felt they owed to other people or the guilt they would feel for being a transmitter. To this regard, every student felt an obligation to their family and described that thinking of their parents or grandparents was a large motivator to avoid exposure risk, especially when at home.

Another factor that was echoed in most interviews was that students' lives were dramatically shifted because of online school, such as losing contact with friends, roommates and significant others, moving where they lived and losing independence when home. The key difference between the change in life for college students compared to other demographics was that their homes, friends and pre-pandemic lives were at another location waiting to be picked back up. When I asked about their experience they described the vast change in pace but the relief to see their parents at first, but as almost every one of us experienced in quarantine, eventually those feelings turned to anxiety, depression and anger. All but one student signified that they felt some dip in mental wellbeing during the pandemic all occurring in the first section of quarantine.

These initial findings indicate that students who went out to parties and carried on, business as usual, did weigh the pros and cons before making decisions. However, it seems that students' lack of concern for themselves and lack of knowledge about spreading contributed to why they responded poorly to voluntary restrictions. I hope in further analysis to uncover what could have been communicated differently or what conditions inspired complacency to change the outbreaks on college campuses. 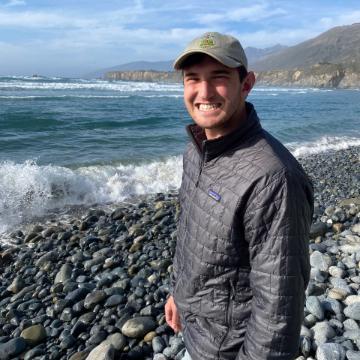 "I was born and raised in Seattle, WA, and I’m a business marketing major with minors in philosophy (ethics) and sustainability, reflecting my academic interests in business ethics and climate justice. I enjoy learning how businesses can make ethical decisions while advancing social and racial equity. I hope for a career as an ethical innovator and consultant, focusing on organizational ethics and sustainability. My memberships and interests include sculpting and welding, playing men's Club Ultimate Frisbee for the SCU team, and the Sigma Pi fraternity. My role models include the late congressman John Lewis, designer Daan Roosegaarde, and American soccer champion Megan Rapinoe."