When David DeCosse, director of religious and Catholic ethics and Campus Ethics Programs at the Markkula Center for Applied Ethics, began his work with the Los Angeles Catholic Worker Community, he was familiar with the type of work and services the organization was doing, but never could have guessed that the experience would be so transformative. As he says, he was “familiar with their work for years, and always appreciated their ethos,” but he has now begun to see the world differently. “I think it happened at a visceral level,” he says. 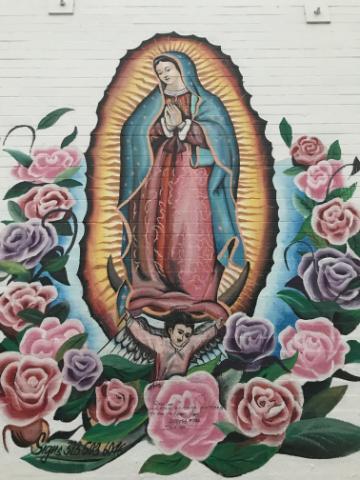 (Mural of Our Lady of Guadalupe in Boyle Heights, Los Angeles California. Photo by David DeCosse, 2021)

DeCosse took an extended personal leave of absence, and spent the fall of 2021 working and living at a House of Hospitality in downtown Los Angeles created by the L.A. Catholic Worker Community. The Catholic Worker movement, started by Dorothy Day among others, has created houses and programs to help unhoused and impoverished communities across the country. DeCosse spent months living at the house among other volunteers and formerly unhoused people who have now taken it upon themselves to aid others. 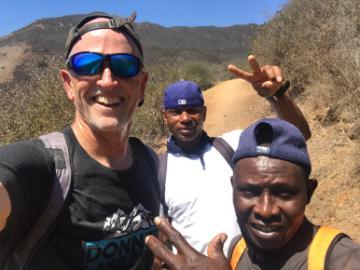 As DeCosse tells it, he spent his days cooking, cleaning, and taking people to medical appointments. At the Hippie Kitchen, a soup kitchen in Skid Row operated by the Los Angeles Catholic Worker, he chopped onions and baked bread in an effort to make between 400 and 600 meals per day. As he says it, the emphasis of his time in Los Angeles was on “walking with the poor, the homeless, the sick, and the marginalized.” When time permitted, DeCosse explored the Boyle Heights neighborhood in which he was immersed, and found opportunities to hike nearby with co-workers from the L.A. Catholic Worker Community. 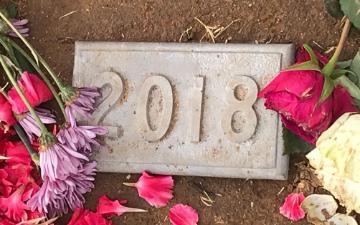 Also during his time in Los Angeles, DeCosse penned a piece for the National Catholic Reporter about a service held by L.A. County to bury the unclaimed dead. Located in Evergreen Cemetery in Boyle Heights is a gravestone marked with the year 2018 marking the resting place for the cremated remains of 1,780 persons who died unclaimed and are now buried.

(A 2018 maker identifying the gravesite of 1,780 persons who died unclaimed in Los Angeles, California. Photo by David DeCosse, 2021)

What has struck DeCosse the most since returning, however, is the ways in which his experiences have added to his daily life. In his work, he says he has become more aware of the people excluded from programs and services, and that he and all of us should be working on “noticing, being more aware of who’s excluded and how to include everyone,” not just those who are participating. One thing that he took away from his journey was the fact that “there is no they, everyone is so distinct.” DeCosse spoke about the assumptions of homogeneity that many of us have when it comes to the unhoused populations, and how his time there helped dispel some of those notions. We tend to assume that everyone is free and responsible for their own actions, but we fail to see how the complex problems that lead to homelessness and poverty impact a person's freedom and responsibility.

DeCosse’s trip has affected his teaching as well, as discussions with students have led him to focus on informing students about the importance of compassion and understanding. Similarly, he has begun work with other like-minded faculty at SCU to address the university’s response to homelessness and craft a unified message that is consistent with the mission and values of the university.

When asked about the one thing he would like to remind people of, DeCosse said that he hopes people always keep their humanity and the humanity of others in mind. As he says, “this person is made in the image of God; this is a human being who is fully equal to me and to everyone else.” Keeping this tenet in mind will help us all as we approach the unhoused and many other situations in life.

David DeCosse reflected on his experiences in Los Angeles and some events pertinent to the communities he was serving through his articles published in the National Catholic Reporter.

Photographs provided by David DeCosse and used with permission.

Lucas Bush ’23, political science and ethnic studies major and a marketing and communications intern with the Markkula Center for Applied Ethics, contributed to this story.