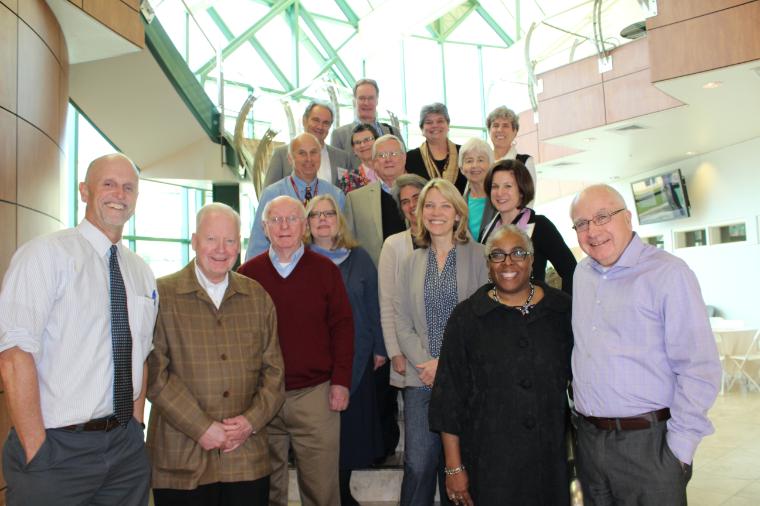 Participants in the February 2016 conference, "Conscience and Catholic Health Care: From Clinical Contexts to Government Mandates."

Conscience issues abound in Catholic health care in a pluralist society like the United States.

For example, how does one manage the merger of Catholic and non-Catholic hospitals? And how does one navigate a clinical setting in which a patient seeks a treatment that Catholic doctrine may prohibit?
On February 11 and 12, 2016, the Markkula Center for Applied Ethics hosted a scholars' seminar, “Conscience and Catholic Health Care: From Clinical Contexts to Government Mandates.”  The event was co-sponsored by the Ethics Center and the Catholic Health Association of the United States, and was organized by the Center's Campus Ethics Director David DeCosse.
The aim of the seminar was to engage these vexing current issues, clarify their ethical contours, and open up ways in theological and philosophical thought that could assist in the development of practical solutions.
Orbis Books has agreed to publish a book containing the essays from the conference. The conference was been made possible by a generous gift from Michael and Phyllis Shea.

Lisa Fullam, “Dealing With Doubt: Epikeia, Probabilism, and the Formation of Medical Conscience”

Shawnee Daniels-Sykes, “Conscience, Race, and Health Disparities: Catholicism and the Formation of Conscience in Light of a Black Liberation Bioethics”

John Paris, S.J., “The Role of Conscience in the Delivery of Health Care”

Carol Bayley, Ph.D. is Vice President for Ethics and Justice Education at Dignity Health in San Francisco, Calif. She has written numerous articles and contributed to Accountability: Patient Safety and Policy Reform and Management Mistakes in Healthcare: Identification, Correction, and Prevention. Her essay “From Catholic Health Care West to Dignity Health: Conflicts of Conscience in American Catholic Health Care” appeared in Conscience and Catholicism: Rights, Responsibilities, and Institutional Responses (Orbis 2015).

Fr. Coleman is a member of the United States Province of St. Sulpice (the Sulpicians).. He is presently an adjunct professor of ethics in the Graduate Program of Pastoral Studies at Santa Clara University. Since 2006 he has served as corporate ethicist for the Daughters of Charity Health System, a six hospital system located in California. His recent publications include "Direct and Indirect Abortion in the Roman Catholic Tradition: A Review of the Phoenix Case" (HEC Forum 25:1, 127-143) and "Subjectivism, Vitalism? Catholic Teachings Avoids Extremes" (Health Progress).

Shawnee M.  Daniels-Sykes, Ph.D., is an Associate Professor of Theology and Ethics at Mount Mary University in Milwaukee, Wis. She is also Adjunct Associate Professor at Xavier University of Louisiana. Her research and writing focuses on health disparities, the Affordable Care Act, violent gun homicides, among other topics. She is the author of “Still We Remain: Living Religious Liberty Consciously and Unconsciously,” which appeared in The Journal of the Black Catholic Theological Symposium and of “Code Black: A Black Catholic Liberation Bioethics" in The Journal of Black Catholic Theology.

David E. DeCosse is the Director of Campus Ethics Programs at the Markkula Center for Applied Ethics at Santa Clara University, where he is also Adjunct Associate Professor of Religious Studies. He has written for academic journals like Theological Studies and journalistic outlets like National Catholic Reporter. With Kristin Heyer, he co-edited the book Conscience and Catholicism: Rights, Responsibilities, and Institutional Responses (Orbis 2015). He also co-edited the book Pope Francis and the Future of Catholicism in the United States: The Challenge of Becoming a Church for the Poor (USF 2015)

Roberto Dell’Oro is the Director of the Bioethics Institute and Professor in the Department of Theological Studies at Loyola Marymount University in Los Angeles, Calif. He is the author/co-author of three books, Health and Human Flourishing: Religion, Moral Anthropology, and Medicine; Esperienza morale e persona; and History of Bioethics: International Perspectives, and has published in national and international journals, such as Theological Studies, the Gregorianum, and Health Progress. He is currently working on a book tentatively titled Method and Meaning: Hermeneutical Reflections in Bioethics.

Kevin Fitzgerald is a Jesuit priest; Research Associate Professor in the Department of Oncology; and the David Lauler Chair for Catholic Health Care Ethics at the Georgetown University Medical Center in Washington, D.C. In 2014 Pope Francis named him to the Pontifical Council for Culture. His research efforts focus on the investigation of abnormal gene expression in cancer, and on ethical issues in biomedical research and medical genomics. He has published both scientific and ethical articles in peer-reviewed journals, books, and in the popular press.

Lisa Fullam, D.V.M., Th.D., is Associate Professor of Moral Theology at the Jesuit School of Theology of Santa Clara University in Berkeley, Calif. She is the author of the book The Virtue of Humility: A Thomistic Apologetic and co-edited the recently published books Ethics and Spirituality: Readings in Moral Theology No. 17 and Virtue: Readings in Moral Theology, No. 16. Her essay “Joan of Arc, Holy Resistance, and Conscience Formation in the Face of Social Sin” appeared in Conscience and Catholicism: Rights, Responsibilities, and Institutional Responses (Orbis 2015).

Ron Hamel, Ph.D., recently retired as Senior Director of Ethics for the Catholic Health Association of the United States. Previously, he was director of the Department of Clinical Ethics at Lutheran General Hospital-Advocate, Park Ridge, Ill. He is a regular contributor to Health Progress (the publication of the Catholic Health Association); the executive editor of Health Care Ethics USA, CHA’s electronic ethics publication; and the editor of Making Health Care Decisions: A Catholic Guide. His 2014 Regan Lecture at Santa Clara University was titled “Conscience and the Complex World of Catholic Health Care.”

Kristin Heyer is a Professor of Theology at Boston College. Her research interests include social ethics, migration ethics and Catholic social thought. Heyer is the author of several books including  Kinship Across Borders: A Christian Ethic of Immigration and Catholics and Politics: The Dynamic Tension between Faith and Power. She has also published articles in Theological Studies and Health Care Ethics USA. She is the co-editor of the book Conscience and Catholicism: Rights, Responsibilities, and Institutional Responses (Orbis 2015).

M. Cathleen Kaveny is the Libby Professor at Boston College, where she holds appointments on the faculty of both the Theology Department and the Law School. She is a recent president of the Society of Christian Ethics. Among her books are Prophecy without Contempt: Religious Rhetoric in the Public Square; A Culture of Engagement: Law, Religion, and Morality, and the forthcoming Ethics at the Edges of Law: Christian Ethics and the American Legal Tradition. She is a columnist at Commonweal and has appeared on the Daily Show to speak about the Catholic response to the Obama Administration’s contraceptive mandate.

Margaret R. McLean, Ph.D. is the Associate Director and Director of Bioethics at the Markkula Center for Applied Ethics as well as Senior Lecturer in Religious Studies and Affiliate Faculty in Bioengineering at Santa Clara University. She is a former editor for Religious Studies Review; reviews manuscripts for a variety of professional journals; and has for years been an ethics consultant for San Francisco Bay Area hospitals. Her article on disaster preparedness published in 2013 in Health Progress received a 2014 Gold Award from the American Society of Healthcare Publication Editors.

Thomas Nairn is a Franciscan priest and the Senior Director of Ethics at the Catholic Health Association of the United States in St. Louis, Mo. Prior to joining CHA, he was the John Professor of Catholic Ethics at the Catholic Theological Union in Chicago. He has published articles on medical ethics and other ethical issues in such journals as Health Progress, New Theology Review, and The Annual of the Society of Christian Ethics. He has also edited The Seamless Garment: Writings on the Consistent Ethic of Life. In 2014, the Vatican's Pontifical Council for the Laity appointed him as the spiritual assistant to the International Catholic Committee for Nurses and Health Care Workers.

Lawrence Nelson is Associate Professor in the Department of Philosophy at Santa Clara University, where is also a Faculty Scholar at the Markkula Center for Applied Ethics. He has served as a bioethics consultant to projects of the National Institutes of Health, the Hastings Center, and the American Thoracic Society. He also argued the end-of-life Wendland case before the California State Supreme Court. Nelson has published articles on ethics, law, and health care in publications such as the Journal of the American Medical Association, Critical Care Medicine, The Journal of Law, Medicine & Ethics, and the Hastings Law Journal.

Father Paris is the Walsh Professor of Bioethics at Boston College. He has served as consultant to the President's Commission for the Study of Ethics in Medicine, the United States Senate Committee on Aging, and the Congressional Office of Technology Assessment. He has published over 100 articles on the area of law, medicine, and ethics; and has served as a consultant and expert witness in many landmark biomedical cases, including the Quinlan, Brophy, Jobes, Baby K, and Gilgunn cases. His recent publications have been appeared in the Journal of Perinatology, Nature, and the American Journal of Bioethics.

Anne E. Patrick, S.N.J.M., is William H. Laird Professor of Religion and the Liberal Arts, emerita, at Carleton College. She is a past president of the Catholic Theological Society of America; recipient of its John Courtney Murray award; and a founding vice-president of the International Network of Societies for Catholic Theology. She is the author of Liberating Conscience (1996); Women, Conscience, and the Creative Process (2011); and Conscience and Calling: Ethical Reflections on Catholic Women’s Church Vocations (2013).

Karen Peterson-Iyer, Ph.D., is Lecturer in Religious Studies at Santa Clara University. She earned her doctorate at Yale; has worked on the staff of Sojourners magazine in Washington, D.C.; is an ordained Presbyterian minister; and is on the board of the Society of Christian Ethics. Her research interests are currently focused on sexual ethics, bioethics, and human trafficking. She has published articles in the Journal of the Society of Christian Ethics and in Conversations on Jesuit Higher Education. She is also the author of Designer Children: Reconciling Genetic Technology, Feminism and Christian Faith.

Carol Taylor, Ph.D., R.N., is a senior clinical scholar at the Kennedy Institute of Ethics at Georgetown University and Professor of Medicine and Nursing. At Georgetown, she directs an innovative ethics curriculum grounded in a rich notion of moral agency for advanced practice nurses. Her research interests include clinical and professional ethics, and organizational integrity. She is the author of Fundamentals of Nursing: The Art and Science of Person-Centered Nursing Care, which is now in its 8th edition and co-editor of Health and Human Flourishing: Religion, Medicine and Moral Anthropology.