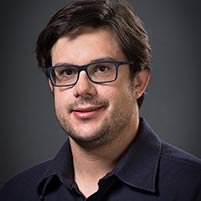 Christian Helmers is an associate professor of economics at the Leavey School of Business. He joined the economics department in the Winter of 2014 as an assistant professor.

Professor Helmers’ scholarship has appeared in journals such as The Economic Journal, The Review of Economics and Statistics, and Quantitative Economics. His research focuses on innovation, law and economics in particular intellectual property, and the economics of digitization.

Professor Helmers came to Santa Clara from Universidad Carlos III, Madrid where he was an Assistant Professor. Prior to that, he worked as a research economist at the London School of Economics. He has been a visiting research scholar at UC Berkeley, Stanford, the World Intellectual Property Organization (WIPO), as well as Ludwig Maximilians University in Munich. He has been involved in policy related work for various organizations including WIPO, the European Patent Office (EPO), the UK Intellectual Property Office, the Chilean Intellectual Property Office (INAPI), and the International Trade Center UNCTAD/WTO.