If, after sleeping for several hundred years, Rip van Winkle woke up today and walked into a courtroom, he would be surprised by the way we pick juries. 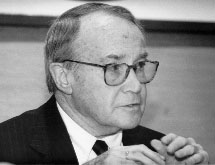 In 1807, when Aaron Burr was on trial for treason, Burr's lawyer said to the court, "We can't get a fair jury because there has been too much publicity. We don't want anybody who knows anything about the case."

The argument went to Chief Justice John Marshall, who said, "Well, that's impossible. We don't want to discourage citizens from being well-informed. They can be on the jury provided they say they will be fair and decide the case on what they hear in the courtroom."

Through the years, we've changed that approach, but little else in the legal system is terribly different from what Rip van Winkle would have found 200 years ago.

Today, most people in the United States get most of their information from radio and television rather than from print (although 64 percent of the population do read newspapers). The radio is on for most people more than three hours a day. Television is on as much as seven hours a day. We now have a media-saturated society.

So if a case involves a high-profile defendant who has become a household name — a Lt. Col. Oliver North or a Mayor Marion Barry or a Manuel Noriega or a Valdez Capt. Joseph Hazelwood or Leona Helmsley or Theodore Kaczynski or Mike Tyson or O.J. Simpson — how can we select jury members who have not heard of these defendants?

Megan's Law
A good illustration is Megan's Law. Megan was a 7-year-old girl who was lured into a house across the street from her home in New Jersey, sexually abused, and then murdered. The person suspected of the crime had been recently released from prison, and he had a long record of prior sexual abuse.

The community was very upset. They went to the state legislature, and a law was passed-Megan's Law-which required the notification of neighbors in a community where a person with a record of that kind was released.

When the man charged with Megan's murder came to trial in January, defense lawyers asked prospective jurors, "Do you know what Megan's Law is?" And if the prospective juror said yes, the defense argued, "We want that juror stricken because he or she will connect this defendant with that case. That juror will know the defendant has a criminal record, and he won't be able to have a fair trial."

The problem is that almost every person who lives in New Jersey knows what Megan's Law is. The issue has gone twice to the higher courts in New Jersey. Now it's back, and the judge has impaneled 4,000 prospective jurors. He is engaged in questioning them, which he says will take until May.

I think it's madness, in today's mass media society, to search for jurors who know nothing. We have to stop being Don Quixote, whether we're in New Jersey or somewhere else, looking for jurors who are ignorant.

Just as Chief Justice Marshall decided in 1807, we have to recognize the difference between an impartial juror and an impartial jury. The whole concept of having 12 people on a jury is to bring people of diverse backgrounds and perspectives into one room to decide a case. It is not to find 12 people who are all the same.

A Jury of Peers
The origins of the jury system are in 11th-century England. The concept was that people were entitled to a jury of their peers. At that time, a peer meant someone who knew the accused, someone who lived in the neighborhood and knew who was a liar and who would tell the truth. If the potential juror was a stranger, he could not serve on a jury. Somehow, over the centuries, we turned that upside down.

In fact, we've turned the tables. We now ask jurors more about themselves than they may learn in the courtroom about the parties in the dispute. When a person is called for jury duty, we give him or her a massive questionnaire. In some cases, the questions can go on for 100 pages.

Last year, a woman named Dianna Brandborg was called for jury duty in Texas and given a series of questions to answer, such as What is your income? What is your religion? What books do you read? What are your favorite television programs? Have you ever been divorced?

She finally got upset and said, "I'm entitled to some privacy. These questions are nobody's business but my own." The judge said, "OK, lady, you're going to jail for contempt," and he put her in prison.

Unsullied Justice
In 1871, Mark Twain attended a trial in Virginia and witnessed the jury selection. He wrote:

"I remember one of those sorrowful farces in Virginia, which we call a jury trial. A noted desperado killed Mr. B., a good citizen, in the most wanton and cold-blooded way. Of course, the papers were full of it; all men capable of reading read about it; and, of course, all men not deaf and dumb and idiotic talked about it."

A minister, intelligent, esteemed and well respected, a merchant of high character and known probity, a mining superintendent of intelligence and unblemished reputation, a quartz mill owner of excellent standing were all questioned in the same way, and all were set aside from the jury.

Each said public talk and the newspaper reports had not biased his mind, but that sworn testimony would overthrow any previously formed opinion and would enable him to render a verdict without prejudice and in accordance with the facts.

But such men could not be trusted with the case. Ignoramuses alone could mete out unsullied justice.

What would Mark Twain say about looking for jurors in New Jersey who never heard of Megan's Law? What would he say about moving the Kaczynski case from Kansas City to Denver, as if that would change what people know about the Unabomber?

Newton N. Minow, former chairman of the Federal Communications Commission, is a lawyer with the Chicago firm Sidley & Austin and the Annenberg Professor of Communications Law and Policy at Northwestern University in Evanston, Ill. This article is excerpted from his keynote address at the Markkula Center's January conference, "Courts and the Mass Media: The Ethical Issues."