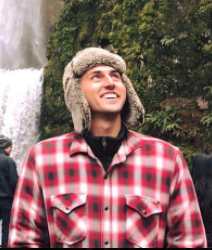 I know you love helping people. In fact, you’re one of the few people who goes out of his way all the time to help others who need it. Do you think that people have an obligation to help where they can? In other words, if you have the power to help someone, are you morally obligated to help them?

So, if there is a probability that the morally good outcome (in this case, the homeless guy receiving money) could occur without your involvement, you are not obliged to become involved? But if the morally good outcome cannot occur without your involvement (for example, if you’re the only guy in the world with disposable income and you are uniquely capable of sparing a few bucks for the homeless guy), then you have to be involved?

Yeah, if your lack of involvement precludes the possibility of a morally good outcome, then you have to be involved. If your involvement isn’t absolutely necessary, then you’re not absolutely obligated. It’s recommended, but not obligated. Your degree of morally required involvement is related to how necessary you are in the process. If there’s a rocket ship that’s going to transport the last few survivors of the human race to a safe new planet, and the janitor at NASA falls asleep on the job, the rocket ship will still launch, but if the main scientist who pushes the red button falls asleep, the rocket isn’t going anywhere—in that case, you wouldn’t say both the janitor and the scientist face the same obligation to stay awake. The scientist faces a moral obligation, the janitor does not.

So if the morally good outcome requires you to express an opinion, you are obligated to state that opinion, even if you want to stay silent?

Yeah, but at the same time, it’s hard to blame someone for staying silent. So, let’s say you’re in a situation where a group of people is verbally abusing someone because of their race or religion or whatever. You are the only person in the vicinity who could step in and defend this poor guy who is facing discrimination. Yeah you are obligated to help. But maybe you have a small kid with you, and you’re worried that the group of racists will turn on you. So, for the sake of the kid’s safety, you choose not to intervene. There, you decided your obligation to the kid superseded your obligation to the abused victim. When it comes to moral choices, you don’t know how many variables a person is considering, or how many overlapping or conflicting obligations they’re pondering. I can’t really blame someone for staying silent in those situations, because maybe they’re just fulfilling another obligation that they found more important.

Interesting. So how do you then judge whether someone acted morally or not? Like, if you’re saying you can never really tell what moral pressures a person faces, can you ever tell whether a person is acting in accordance with their moral obligations?

No, you can’t. That’s the whole point. You can’t say with absolutely certainty that the person who remained silent was acting against their moral conscience. Maybe they just had other obligations. That’s why I think the whole partisan anger and resentment right now is so messed up. People on the left are so quick to pass moral judgment against people who voted for Trump. They automatically condemn them as ‘bad people’. But you don’t know what moral variables those people were weighing.

Yeah, exactly. That’s why I think this Humans of SCU thing is so great. We need to be a lot better at understanding each other. We need to really understand where each other’s moral decisions are coming from. Otherwise, we’re just wasting time arguing needlessly when we don’t even understand each other’s rationale for choosing those stances.

It sounds like you think people talk too much and don’t listen enough. Do you think most people are speakers or listeners?

That’s interesting. We pride ourselves on being a community of leaders. Do you think it’s more important for a leader to be a speaker or a listener? And do you think a leader can be a passive listener?

I think a good leader needs to be an active listener. He needs to understand the people he is leading. But I think many people who call themselves leaders are really just speakers. They know how to talk, and because talking is required for communication and communication is required for leadership, they think they are leaders. But if you don’t seek to understand the views of the people you are trying to lead, you can never be a good leader, because you can never truly know whether you are acting in their interests.

Are you a speaker or a listener?

I am a listener, just because of what I told you. I don’t think you can fully understand why people make certain decisions until you talk to them and understand their variables. So, when people do something mean to me, I don’t talk to start a conflict, or confront them about their actions in an argumentative or aggressive way. Instead, I sort of just wait to see how they explain or justify their actions. I just want to know how they weighed their moral variables. Some people think I’m being a push-over, but really I’m just behaving how everyone ought to behave in antagonistic situations. I’m just trying to understand people before I judge them.