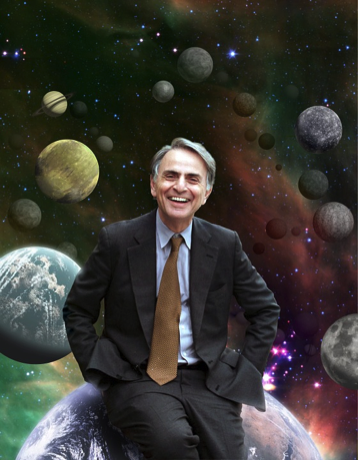 “Our lovely blue planet, the Earth, is the only home we know. Venus is too hot. Mars is too cold. But the Earth is just right, a heaven for humans.” - Carl Sagan, in his 1980 book Cosmos

Carl Sagan loved the Earth almost as much as he loved outer space. An endlessly inquisitive mind who investigated the universe through both experiment and theory, he gained global fame and recognition in the 1970s and 80s as the liaison between scientists and the general public. He was the face (and voice) of Cosmos, the iconic PBS series that was broadcast in the US (and later around the world) in 1980, exploring the depths of the universe and the role humans play in it. He was also a renowned physicist who was known for studying the planets in our solar system as well as the origins of life on Earth [1]. And from his studies of the greater universe, he came to understand just how tenuous life on Earth is, and how the future of humanity rests on such a delicate balance of environmental factors. Among the scientific crowd, Sagan was noteworthy for his ability to convey science to the public in a way that they could both understand and appreciate. Cosmos did more than just inform; it also inspired, and paved the way for a renewed public interest in science today.

Sagan’s success in both academia and the public eye stemmed from his passions and his personality, both of which can be traced back to his childhood. Carl was born in Brooklyn in 1934 to two Jewish parents. He believes that he gained his sense of objective reasoning from his mother Rachel; although she was not a scientist, she was noted for her intellectual potential that was stymied by a childhood of poverty in WWI New York as well as her own unshakeable neuroticism [2], and thus she saw young Carl as the embodiment of everything she could have been. In contrast, Carl found humanity in his father. Sam Sagan was an immigrant from Ukraine who, like many others, came to America seeking a better life for himself and his future children. Like Rachel, Sam had his own ambitions, but after the death of his father, he gave up his goal of being a pharmacist and began working in a textile factory to support his family. Despite his circumstances, Sam was known for his soft heart and for giving to the poor. All in all, Carl Sagan learned a lot from his parents, and his combination of a sharp empirical mind with a sensitive heart would serve him well as the public face of science.

Sagan championed the scientific causes he felt were of utmost importance for the future of humanity. As seen on an episode of Cosmos, he was a firm believer in the “Drake Equation” and the “Fermi Paradox.” In short, the vast number of stars in our galaxy combined with the relatively short time period needed to bring about intelligent life on Earth means another galactic civilization should be within cosmic earshot. Yet, when we turn our ears towards deep space, we are only met with silence [3]. Sagan and many other scientists find this circumstance troubling, and the fact that we are seemingly alone does not bode well for our long term chances. Sagan understood the grave implications of the Fermi Paradox and thus concerned himself Earthly issues that could impact our longevity; he spoke out against the Vietnam War [4], he was arrested for protesting nuclear testing [5], and he was one of the first scientists to bring attention to the perils of climate change [6].

Sagan’s foray into climate science came years before popular terms like “global warming” had caught the public’s eye. In a landmark essay in his book Cosmos, he lays the foundation for how burning ton after ton of fossil fuels is saturating the atmosphere with CO2 and could lead to a “greenhouse effect” that likely gave rise to the atmospheric conditions on Venus [6]. He notes that even a 1-2 degree alteration of our climate could be disastrous, and today, almost 40 years later, we may be already seeing the beginnings of such a change [7]. However, it is worth noting that Sagan was not only focused on the consequences of a warming climate; as Earth’s climate is currently ideal for sustaining life, a significant change in the other direction would be disastrous as well. In the same essay from Cosmos, he points out that deforestation and “slash and burn” agriculture has been systematically replacing our dense, darkly colored forests with the light hues of grasslands and deserts. Since dark colors absorb sunlight and thus collect heat, perhaps we are making the Earth more reflective and potentially colder [6]. Furthermore, Sagan was also an author of one of the first studies on the effects of a potential “nuclear winter,” a massive global cooling scenario that could be triggered by a nuclear war. This frightening possibility played into his motivation to combat nuclear testing, and similar worries led him to alarm the public about the 1991 Kuwait oil fires and the plumes of dense, sun-blocking smoke that were unleashed [8].

Of course, today we do not hear much about Carl Sagan’s cooling concerns as global warming has captured the eye of both scientists and the public. Seeing Sagan’s predictions about events such as the Kuwait oil fires may paint him as an alarmist (similar to Paul Ehrlich and his Population Bomb), and many in the scientific community disliked Sagan for his tendency to speculate [2]. However, his speculation was not careless; rather, it stemmed from an appreciation for the beauty of life and a heartfelt wish for its longevity. Environmentalism and even humanitarianism share a deep connection to science, and Sagan believed that scientists should not detach themselves from their humanity. Carl Sagan was a scientist, but he was also a man filled with wonder and concern for the future. And by combining his two sides, he inspired a generation and his work continues to influence environmentalists today.

[7] "Climate Change: How Do We Know?" Nasa.gov. National Aeronautics and Space Administration, 1 June 2017.