A Bipartisan Solution to Pollution

Nate Bradford was a 2016-2017 Environmental Ethics Fellow at the Markkula Center for Applied Ethics.

Should we raise taxes to fight climate change? Staunch conservative, highly recognized economist, and Harvard professor Gregory Mankiw thinks so. Mankiw worked for Mitt Romney, John McCain, and was the chairman of economic advisors for president George W. Bush. He aligns himself with the political right, but unlike the majority of his Republican colleagues, he believes that action must be taken in regards to climate change.

The most effective way to fight climate change, Mankiw believes, is with a carbon tax. Rather than use federal regulations to prohibit environmentally unfriendly products and activities, a carbon tax would allow the market to regulate itself. Naturally, higher prices on carbon intensive products and services would disincentivize people’s consumption of them.

“I think trying to appeal to people’s social responsibility is really hard,” Mankiw said in an interview with environmental activist Leonardo DiCaprio. “They don’t want to think about climate change every time they do every decision.” Mankiw’s view is that a carbon tax would be effective because it doesn’t depend on people’s ideals or sense of social responsibility. It would naturally nudge consumers towards more environmentally friendly purchasing patterns [1].

The common misunderstanding about implementing a carbon tax is that it means more taxes or higher taxes for the American people. In reality, a carbon tax would cause a tax shift rather than a tax increase. Revenue from a carbon tax would allow cuts in taxes like the payroll tax, making it revenue neutral [2]

The carbon tax can also be viewed from a cost-benefit analysis standpoint. By 2060, climate change will cost taxpayers an estimated $44 trillion [3]. More serious and frequent flooding, droughts, wildfires, hurricanes, and heat waves caused by climate change will cost victims of these natural disasters as well as citizens whose taxes will fund disaster relief programs. In many areas the price of home insurance will rise and the need for air conditioning as well. National security costs will be incurred by the U.S. as it struggles to maintain peace in areas where externalities of climate change are likely to cause violent conflict and political extremism. An example of this is the war in Syria, which recent studies show has been “exacerbated by drought and famine” [4].

With the validity of climate change no longer a debatable issue, carbon emissions can be economically defined as a negative externality. “The basic idea is that we want to tax bad activities that have negative effects on other people in society,” Mankiw says. An example of this philosophy would be the increase of taxes on cigarettes which has resulted in a large reduction in consumption of cigarettes [5].

Climate change should not be a partisan issue, and it is up to democrat and republican voters alike to demand that politicians use logic, reason, and scientific facts when approaching this issue. An easy way to fight climate change that does not involve heavy regulations and coincides with both conservative and liberal agendas is a carbon tax.

Recently, Mankiw, fellow Harvard Economics professor Martin S. Feldstein, and founder and CEO of Climate Leadership Council Ted Halstead co-authored a plan titled “The Conservative Case for Carbon Dividends” with the assistance of a handful of former White House Treasury Secretaries. In short, the plan is to implement a gradually increasing tax on carbon emissions, redistribute revenue from this tax to the American people, and assist companies struggling to compete in foreign markets because of the tax [6].

“One of the things I love about this policy is it does have potential for bipartisan support,” said environmental economist Yoram Bauman. “It’s not big government, it’s not smaller government, it’s just how do we make the tax system fairer and more sustainable” [7]. 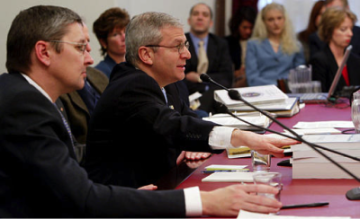 Mankiw, on the left, sits as chairman of The Council of Economic Advisors at a hearing regarding President Bush’s 2005 financial budget (AP Photo/Pablo Martinez Monsivais) [8]