Michael Turgeon was a 2016-2017 Environmental Ethics Fellow at the Markkula Center for Applied Ethics.

In the early 20th century, environmentalism was largely a philosophical movement. John Muir’s naturalism stands alongside American transcendentalism and was rooted more in Christian spirituality than empiricism. However, in the 1950s and 60s, activists such as Rachel Carson started examining nature through a scientific lens, and the influential (and controversial) writings of Lynn White led to a rift between environmentalism and some traditional notions of Western religion. Meanwhile, the field of ecology blossomed and gained broader acceptance in the public eye, pushing forward knowledge of humanity’s tangible effects on the natural world [1]. Concern for the environment became associated with an acceptance of and advocacy for science, and that connection is stronger than ever today with the highly contentious and politicized field of climate science. And in the late 60s, one of the most significant names in the conjoined ventures of ecology and environmentalism was Stanford professor Paul Ehrlich.

Ehrlich’s affinity for nature and the science of ecology began at a young age; growing up in Philadelphia and suburban New Jersey, nature was not immediately accessible, but he instead spent many hours in the Museum of Natural History. Ehrlich was a bright young man and while he was in high school he was encouraged to study butterflies and conduct scientific research [2]. At the same time, he was influenced by notable ecologists of the day such as Fairfield Osborn, president of the New York Zoological Society, and ornithologist William Vogt. Both were known for their writings on an impending ecological crisis, and notably Vogt’s 1948 book Road to Survival was instrumental in informing the young Ehrlich about notions such as population dynamics and resource dependence. These influences would become quite apparent in Ehrlich’s famous writings later on, after he had become an accomplished biologist. Ehrlich garnered a degree in zoology from the University of Pennsylvania in 1953, and went on to get his Ph.D. in entomology from the University of Kansas in 1957 [2]. As was suggested to him as a youth, Ehrlich studied butterflies, and published a landmark paper on the coevolution of butterflies and plants [3]. He soon ended up as a professor at Stanford University, where he embarked on a colorful career of research and writing about both insect biology and the ecological state of the human race. 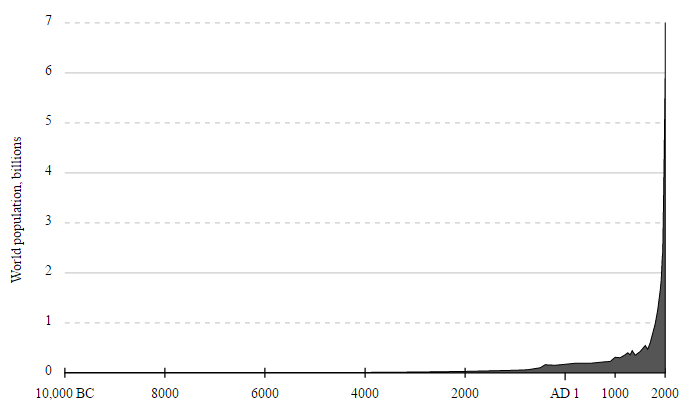 As seen in the graph above, Ehrlich was gravely concerned with an obviously alarming trend in the human population. In his ecological studies, he saw time and time again that when a population undergoes exponential growth, it then experiences a subsequent crash as it has grown beyond what its environment can support. If these fundamental ecological ideas held true, then humanity was due for cataclysmic downsizing of the population. Commissioned by his good friend and fellow environmentalist David Brower, Ehrlich published his landmark book The Population Bomb in 1968, warning the world of the dangers of overpopulation and how we must combat it or be plagued by poverty and starvation [4]. Alongside his scientific conclusions, he also declared a need to combat this global threat through drastic political action, limiting procreation through a combination of tax incentives, easy access to birth control and abortion, and even “compulsion if voluntary measures fail” [5]. Needless to say, this call to action was not compatible with traditional Western values. While not explicitly about the environment, The Population Bomb fits in well alongside similar works that advocate for humanity to finally consider how its actions affect the greater ecological community, and how these actions affect both the diversity of species that share our planet as well as the health of humanity itself. And, Ehrlich and his contemporaries present environmentalism in an aura of scientific objectivity rather than religion or philosophy.

Obviously, despite the scientific basis of Ehrlich’s claims, the cataclysm he predicted never came to pass. Instead, global food production increased in the following decades following rapid technological advancement, and the overall growth rate of the human population has actually declined since the 1960s [3]. While Ehrlich has since admitted his inaccuracies, he still stands by the central messages of his work despite the backlash he has faced; human expansion and consumption is still unsustainable and out of control, even if the population itself is relatively stable. However, despite all the advancements Ehrlich has made in the fields of human ecology and conservation biology, he frequently faces accusations of “alarmism,” a term that still haunts environmental activists to this day. In fact, The Population Bomb is frequently referenced in literature that tries to downplay the potential effects of global anthropogenic climate change as an example of how even renowned scientists cannot predict the future with much certainty [7, 8]. And perhaps, they have a point. Extrapolating beyond what the data tells you, at least with the level of certainty that Ehrlich conveyed, is not wise unless all factors are considered. Ehrlich did not realize how the human population is different from animal populations, and how we actually have the power to expand the carrying capacity of our environment.

Today, the vast majority of scientists believe that we are altering our climate in ways that will have destructive consequences. If they want the public on their side, they should consider more than just cold, objective data in their rhetoric because, if any of their predictions fall short, they have nothing to fall back on. For years, environmentalism thrived on philosophy, spirituality, and passion; in the modern world, scientifically-informed emotion could be a powerful environmentalist tool.