A Large Voice from Tiny Islands

Nathaniel Bradford was a 2016-2017 Environmental Ethics Fellow at the Markkula Center for Applied Ethics.

The sky transformed into a bright red as a monstrous mushroom cloud arose on the horizon. Tony DeBrum and his grandfather looked on in awe, fishing nets in hand, at the American nuclear test. The effects of this experiment, which was estimated to be 1,000 times more powerful than the bomb dropped on Hiroshima during World War II, would prove disastrous for the people of the Marshall Islands.

DeBrum’s childhood coincided with the Cold War, during which the United States was testing its nuclear capabilities in the Pacific. The effects of the Castle Bravo Nuclear Test, which deBrum witnessed at just nine years old, and 67 more nuclear tests, would later be grounds for a number of lawsuits DeBrum would file against the United States as Foreign Minister. DeBrum’s work to bring justice for the Marshallese people has taken a new form in the last decade. With the effects of climate change accelerating the rise of sea levels, his people face the disappearance of their homes and livelihoods.

The Marshall Islands are made up of 29 atolls and five islands scattered between Hawaii and the Philippines. These atolls are small, usually only stretching a mile wide and sitting just six feet above the Ocean’s surface. Today, the Marshallese people are even more vulnerable than they were during deBrum’s childhood, when nuclear weapons were being tested in their backyard. With sea levels rising at an increasing speed, the Marshall Islands will likely be underwater if the earth’s temperature rises another two degrees Celsius. To scientists, this is beginning to look more and more unavoidable.

“Sitting six feet above the water and looking where my mother's garden used to be,” deBrum sighs. “It’s now landfill because if it was not landfill it would be underwater. The realities of climate change and the effects on human beings didn’t need to be taught to me in a textbook.” Already, rising sea levels are beginning to impact the livelihoods of the Marshallese people as they move inland to avoid having their houses be torn apart by the ocean during king tides. For people like deBrum who wake up and see the effects of climate change firsthand everyday, it is hard to understand how others can deny its existence.

Since sharing his firsthand experience only goes so far in negotiations, the mark of 2 degrees celsius is a key point for deBrum. In addition to the disappearance of nations like the Marshall Islands, exceeding the two degree mark will result in the flooding of major coastal cities in the United States. In countries like Bangladesh, India, and Vietnam, millions of people will be forced to relocate, signifying the first major wave of climate refugees. “We are the signal that things are going to get worse if [major nations] don’t behave, rather quickly,” deBrum said about the major world powers responsible for accelerating temperatures. 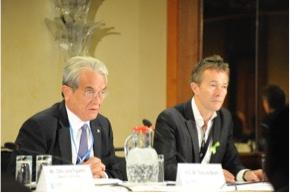 The first is that closer coordination will be required between activists. Many subgroups have been created to bring justice to the Marshallese people, but these groups often become splintered in their efforts. DeBrum believes that if these groups worldwide are unified and well coordinated they can prove to be a powerful force for change.

As a small island country with limited economic power and resources, the Marshall Islands and other nations like it can use their lack of power to their advantage.

“We are vulnerable, but not threatening,” deBrum said. “And therefore, we are able to approach some of the more un-approachables in such a way that they felt somewhat obligated to assist in promoting our cause. They knew that we were there literally as a matter of life and death, there was no ‘If we don’t do it now, maybe we can do it later’ type of message. Our message was ‘If we don’t do this now, you won’t be seeing this kind of people anymore. Our countries are forever condemned.’”

This message resonated with Brazil especially at the Paris Climate Conference. The country’s ambassador immediately picked up her phone and spoke to her home office about the need to get on board with deBrum and the Marshall Islands. As one of the world’s largest countries that emits 2.5% of the world’s carbon dioxide, Brazil has pledged to cut its 2005 emission levels down 37% by 2025, leading the effort to combat climate change in South America.

However, deBrum wants to make sure that countries are not solely motivated by pity. When this happens, offers begin to focus more on providing a destination for refugees from his nation than on curbing climate change. It is vital to deBrum that these countries understand why climate change is relevant to them if the changes are to be sustainable.

At the Paris Climate Conference, a reporter ran up to him and asked, “Are you here to save your country?” DeBrum stopped, turned and replied sternly, “No, we’re actually here to save the world.”

At 72, saving the world is not as immediately tangible of a goal for deBrum as it once might have been, but he sees hope in the future. deBrum claims that the key to implementing policy to combat climate change and disseminate the message of what it’s effects will be is today’s youth. “The team that we took to Paris, the most important component of our team were the young people,” deBrum said.

DeBrum likes to speak of his message being “carried forward” by the youth of today. He believes they have the power to invigorate those they speak to and make the messages that he preaches transcend political and societal trends. When Selina Leem, an 18 year old who grew up on the island of Majuro, expressed her concerns about how climate change would affect the next generation during the Paris talks, deBrum claims that “even the toughest and most thick skinned of the representatives who'd been in this climate change thing forever and think they've heard everything were moved to tears.” To deBrum, this showed that climate change is not a contemporary issue that requires a band-aid, it is an ongoing issue that the next generation is prepared to commit to solving.