129 million hectares (1 hectare = 107639 ft2) of forest were lost from 1990 to 2015 according to the most recent and comprehensive assessment conducted by the Food and Agriculture Organization of the United Nations in 2015 [1]. The area is about the size of South Africa. The second largest contributor to global carbon emissions arises from deforestation (the first is emissions from the use of fossil fuels) [2]. In Kenya, deforestation dramatically affects local village life since it heavily impacts food security, health, water sources, the economy, and women. Wangari Muta Maathai dedicated her life to solving some of these key issues in Kenya and the world.  In 1977, Maathai founded a grassroots organization, the Green Belt Movement, focused on reforestation to promote sustainability and establish financial income for women in the region. Throughout her life, Maathai pursued movements toward both environmental conservation and women empowerment regardless of the associated obstacles. Achim Steiner, Executive Director of the United Nations Environment Programme (UNEP), described Wangari Maathai as “a force of nature – strong in character and able to survive sometimes the harshest conditions” [3]. Despite being beaten, imprisoned, tear gassed, and attacked multiple times, Maathai kept fighting for what she believed in. Wangari Maathai’s accomplishments inspired her country and the world to further move toward solutions in environmental and humanitarian concerns.

“In the course of history, there comes a time when humanity is called to shift to a new level of consciousness,” she said, “to reach a higher moral ground. A time when we have to shed our fear and give hope to each other. That time is now.” [3]

Maathai journeyed across the world to further her education and earn her advanced degrees while facing insurmountable odds at every turn. Born in Kenya in 1940, in her youth it was rare for women to finish elementary and secondary school. Maathai succeeded academically at a young age while attending St. Cecilia's Intermediate Primary School and Loreto High School in Kenya. As a top rated student, in September 1960, she was selected along with 300 Kenyans to study in the United States through funds from the Joseph P. Kennedy Jr. Foundation. She earned a scholarship to attend Mount St. Scholastica College in Kansas where she graduated with a degree in biology in 1964. She proceeded to the University of Pittsburgh to obtain a Master of Science degree in biology in 1966 funded by the Africa-America Institute [5]. Returning to her roots, in 1971 she attended the University of Nairobi where she studied veterinary anatomy and became the first woman to earn a doctorate degree in East and Central Africa. Following her academic success, Maathai became the first female professor in Kenya in 1976. Maathai became involved in various organizations in Kenya upon earning her PhD. She was a member of the Kenya Red Cross Society, National Council of Women of Kenya, and the Environment Liaison Centre. Through her work at these organizations, Maathai identified the link between environmental degradation and poverty in Kenya and sought to remedy the two issues simultaneously.

"When resources are degraded, we start competing for them, whether it is at the local level in Kenya, where we had tribal clashes over land and water, or at the global level, where we are fighting over water, oil, and minerals. So one way to promote peace is to promote sustainable management and equitable distribution of resources.” [6]

The rate of deforestation in Kenya yielded landslides, frequent droughts, soil erosion, and the loss of vital resources to communities. Traditionally, women in Kenya take on responsibilities for searching for firewood and water in household settings [3]. As the rate of deforestation increased so did the scarcity of resources and eventually conflicts among villages ensued over these resources. Maathai sought to put an end to this conflict through the founding of the Green Belt Movement. The Green Belt Movement encouraged farmers, primarily women, to plant lines of trees, or “greenbelts”. The movement paid women for every tree planted which survived past three months. Maathai believed that “Women who start to plant trees on their farms influence their neighbors. Their neighbors eventually become involved. Now, we see the government reacting” [4].  Aside from repopulating the forests, the movement strives to empower women in Kenya by providing services including lessons on family planning, nutrition, and leadership skills.

Former Kenyan President Daniel Moi, identified the Green Belt Movement as “subversive” leading to conflict between Maathai and Moi [3]. In 1989, the government initiated plans to demolish one of Nairobi’s only parks, Uhuru Park, for the construction of a massive skyscraper. Maathai led a peaceful protest alongside her supporters where they prevented the demolition of the site. Despite facing severe police brutality, Maathai and her supporters went to court and eventually funders of the project removed their investments [4]. The constant clash between Moi and Maathai was also a factor of Maathai’s political activism as she worked with pro-democratic leaders to re-introduce a multiparty system after Moi declared Kenya a one-party state. Maathai was frequently imprisoned, beaten, and targeted by the government as a result. Moi was president for 24 years prior to losing a multiparty election in 2002. In the same year, Maathai was elected a Member of Parliament and Assistant Minister to the Environment where she received over 98% of the majority vote. [7] When asked of her motivation for her political and environmental activism she responded:

“I don't really know why I care so much. I just have something inside me that tells me that there is a problem, and I have got to do something about it. I think that is what I would call the God in me. All of us have a God in us, and that God is the spirit that unites all life, everything that is on this planet. It must be this voice that is telling me to do something, and I am sure it's the same voice that is speaking to everybody on this planet — at least everybody who seems to be concerned about the fate of the world, the fate of this planet.  [8]

Maathai received numerous awards and honorary doctoral degrees for all of her efforts and accomplishments. In 2004, Maathai became the first African woman to earn a Nobel Peace Prize. The prize committee statement explained:

“Maathai stood up courageously against the former oppressive regime in Kenya. Her unique forms of action have contributed to drawing attention to political oppression—nationally and internationally. She has served as inspiration for many in the fight for democratic rights and has especially encouraged women to better their situation” [9].

As a leading activist, Maathai changed the world and encouraged people everywhere to take action. Maathai traveled the world presenting talks about the key global issues surrounding the environment and social injustice. The Green Belt Movement is currently a global movement evolving in the United States, United Kingdom, West India, Japan, South America, and throughout Africa [4]. To date, the movement has led to the planting of more than 51 million trees [10]. In 2011, Maathai died of cancer at the age of 71. She is survived by her three daughters, and her legacy which will live on forever. Maathai’s life, efforts, and accomplishment demonstrate that environmental activism and conservation is a global issue. Environmental degradation heavily affects countries in the developing world. However, the issue is not only their problem to fix; it is a global challenge that must be tackled together as one, across land and oceans. 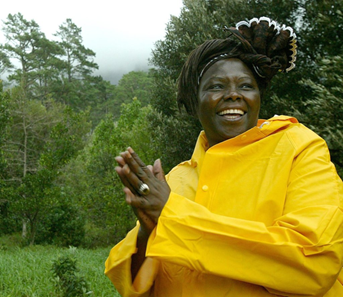