The Next Generation - Youth “Artivist” and Environmental Advocate

He has been called the “Anti-Bieber” [3]. At 6 years old, Xiuhtezcatl (pronounced “Shoe-Tez-Caht”) Martinez stood on-stage at a national global warming event in front of a large crowd and demanded that people open their eyes to what was happening around them [4]. At age 13, he received the 2013 United States Volunteer Service Award from President Obama and was the youngest of 24 national changemakers chosen to serve on the President's youth council. By 15, he had spoken to the General Assembly at the United Nations in New York, and at Rio +20, United Nations Summit in Rio de Janeiro. Now at 16, when he’s not at school or playing soccer, Martinez acts as the director of an international youth activist organization called Earth Guardians.

In 2000, Xiuhtezcatl Martinez was born in Boulder, Colorado to Tamara Roske and Siri Martinez. His mother Tamara co-founded the Earth Guardian Community Resource Center in 1993, an accredited experiential learning high school in Maui, Hawaii. The focus on environmental education and outreach flourished and led into the 1995 Children’s Hope of Torch tour where the Earth Guardians attended high profile events and ended at the United Nations. Martinez is considered a member of the third generation of Earth Guardians, as well as his four other siblings. At 9, he started a new youth Earth Guardian group in Boulder in order to stop the use of pesticides that were harming the community [5]. His father Siri, also a crucial member of the early Earth Guardian efforts, taught his son from an early age about their Aztec roots, which has shaped Martinez’s life and work [6]. The fundamental values held by the tribe of Mashika people (Aztecs from Mexico city) set the foundations for his outlook on the environment and our relationship with it. 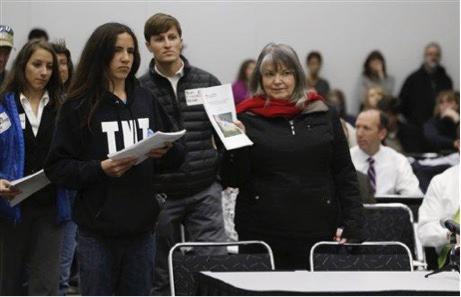 Xiuhtezcatl Martinez and other anti-fracking activists present studies to members of the Oil and Gas Task Force who plan to provide recommendations to Colorado Gov. John Hickenlooper [7]

“Martinez is a vital voice for our time. Combining art and creativity with passion, commitment, and clarity, he represents as well as models what it is to be the change our world and planet need … ” - Julia Butterfly Hill [8]

The Aztec concept of “Teotl” describes the belief that there is a single force of sacred power that fuels the self generation and regeneration of nature [9]. Martinez describes Aztec beliefs as being rooted in the respect and dignity of nature. An abuse of nature is therefore far greater than a loss of one living organism but rather the tearing apart of a fragile and revered system. Rather than viewing his age as a limitation, Martinez has used his youth-oriented platform to draw attention to these types of ideologies, ultimately emphasizing the intrinsic value of nature.

However, many people do not have an emotional or spiritual tie to the environment, creating an apathetic attitude towards general environmental health. The lack of focus on practical and instrumental values has oftentimes resulted in a lack of concern. Martinez, however, has developed an arsenal of methods to capture attention and captivate previously apathetic audiences.

“We don't have to all stop using fossil fuels entirely and go live in the woods. That's not what this is at all about. It's about understanding — seeing — that the way we're interacting with the world is destroying the planet.” - Martinez [10]

Despite being only 16, Martinez is familiar with the limelight. During his first speech at 6 years old, Martinez, in an exasperated voice, explained why we need to protect the Earth; most children do not even know “all life is sacred!” [4]. Despite undeniable early familial influences, Martinez’s mother firmly believes that her son was not indoctrinated; rather, he is fighting for a cause he wholeheartedly believes in himself. Meanwhile, Martinez attributes his current activist mindset to his inspirational parents. He describes his mother as a “warrior” who has “the ability to put everything aside and to fight for what’s right” [10]. Very aware of his privileged upbringing, Martinez openly acknowledges that a lot of kids do not have what he has [10]. This recognition has also allowed him to generate a productive mentality towards acceptance: “true happiness is when we can truly accept everything that's going on, both good and bad, and deal with what we're given” [10].

"I stand before you representing my entire generation … We need you to take action. We are all indigenous to this earth.” - Martinez to the United Nations [13]

The current political climate has provided Martinez with an ample number of causes to protest and reasons to fight. The Earth Guardians represent a mindset not reflected or supported by the current executive branch, making their representation crucial for environmental well-being, as well as the future of tomorrow’s youths. While their actions will not replace those in executive positions, it requires the work of relentless non governmental organizations to demand and incite change. In recent months, Martinez has been vocal about a number of issues such as the fight in Standing Rock, North Dakota. Not only has Donald Trump pushed forward with plans to finish the pipeline while ruining sacred lands but he also made clear his intentions to rid of eco-driven legislation such as Barack Obama’s Clean Power Plan.

Since Martinez believes that people can listen to music far more easily than a climate change speech, he uses rap music as a vehicle for his environmental messages. Described on his Facebook page as an “indigenous eco hip hop artivist, activist and spokesperson,” Martinez has released a number of songs including, “What the Frack” and “Be the Change” [11]. Martinez’s fearless performances catch audience member’s off-guard, not expecting a boisterous 16 year old to interrupt his own speech to perform a self-written song that cleverly incorporates environmental activism. During a speech in 2014 at TEDxYouth@MileHigh (an independently organized TED talk in Colorado), Martinez shared some of his original songs as well as snippets of his own testimonial and mission [12]. Martinez also plans to release his first album titled “Break Free” sometime in 2017.

Unlike other activists whose efforts peaked later in adulthood (i.e., Rachel Carson, David Brower) Martinez’s potential future impact is unparalleled. Not only has he formulated well-educated, personal opinions in addition to maintaining strong ties with the people and places his is protecting, but Martinez has become revered by the greater environmental community. Using social media, he has been able to document and share his experiences by regularly posting photos and updates from his endeavors. This form of communication activates the attention of non-environmentally focused individuals, therefore expanding networks and fostering concern. Additionally, he is talking with supporters about suing the US Federal government due to its inaction regarding climate change [14]. The number of Martinez’s accomplishments far exceeds the amount most individual’s achieve in a lifetime. However, this momentum will not slow anytime soon.

“What’s at stake right now is the existence of my generation.” - Martinez [5]