Taylor Ellis ’21 is a 2020-21 Environmental Ethics Fellow at the Markkula Center for Applied Ethics. Views are his own.

The Point Reyes National Seashore embraces the sweeping hills of Marin County and the striking shoreline of the Pacific Ocean. The San Andreas fault line carves through the Park, dividing the Pacific and North American tectonic plates. Beneath the earth’s surface, these two plates bump against each other. These plates have rigidly danced for over 16 million years, choreographing the features of smooth, rolling hills and deep basins with crystal lakes. Prior to the intensity of the COVID-19 pandemic, Carey Feierabend explored along the fault every day. Her role as the Acting Superintendent of Point Reyes National Seashore was extended from a few months to over a year. She experienced the unplanned nature of 2020.

Like many others, Carey and her team have made adjustments for the unpredictable needs of their guests. The unnatural introduction of what Carey calls “Charmin flowers” was one project that sought her attention. Although the restrooms of Point Reyes were open to the public during this year, the guest’s personal concerns convinced them to find an alternative restroom. The artificial bloom of “toilet paper flowers” prompted Carey’s social media team towards issuing a statement on the topic: “Everybody poops!” Her team crafted a guide on how to act responsibly when “nature calls.” When Carey began this position with Point Reyes, this kind of social media content was not in the job description. 2020 was a year of adaptation and this statement is a conscious attempt to renew our care for the environment. 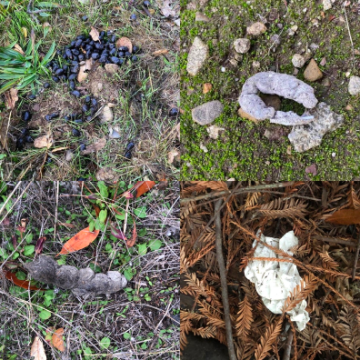 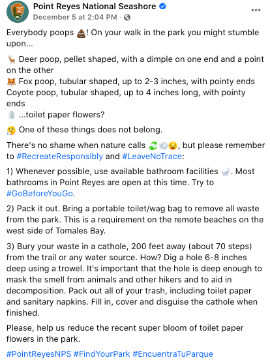 The Earthquake Trail in Point Reyes starts at the visitor center and weaves along the turbulent San Andreas Fault Line. Throughout her term, Carey has found solace in this quick hike. In December, Carey took this hike with the Executive Director for the Point Reyes National Seashore Association. While hiking through the drooping coast live oaks, suspended by stability, Carey’s hiking partner took a call to discuss the financial impacts of the pandemic, but Carey continued to absorb this environment. Standing on the San Andreas Fault Line, Carey considered the importance of the 1906 earthquake. The epicenter of the earthquake was near San Francisco, but its intense effects were felt in Oregon and Los Angeles. The earthquake accounted for nearly 700 deaths and widespread panic, displacement, and destruction.

The Point Reyes website describes the significance of faults and boundaries as areas of “dynamic” and “monumental” change. The San Andreas fault line is a boundary separating two tectonic plates and is the origin of the commanding mountains, wavy hills, and ancient valleys sitting on this boundary. 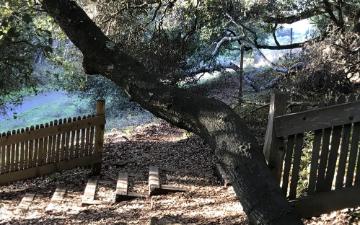 The earthquake hike ends at a fence that was displaced by 16 feet during the 1906 earthquake. This earthquake disrupted all life that hugs the Fault. The fence is proof of the existence of such an impressive event. For Carey, this trail is symbolic of things being changed, shifted, and moved in a profound way. The dynamic power of the San Andreas fault line is familiar to the intense change that characterizes this poignant year. The Point Reyes website says that “although tectonic boundaries may divide plates, they unite areas around the earth in a shared global geologic heritage.” After monumental change, much like the shifting of tectonic plates and the COVID-19 pandemic, Carey hopes that humans can reunite and engage in a “collective conscience” by comparing reflections from our shared experiences and advancing our thoughts and actions. In talking to Carey, I asked what she believed would be a sign in our world that we have returned to normalcy. She said that returning to “normal” is unacceptable. Just as she pensively walked along the San Andreas fault line considering the impacts of monumental and dynamic change, Carey hopes that normalcy is eclipsed by conscientious change.