Taylor Ellis ’21 is a 2020-21 Environmental Ethics Fellow at the Markkula Center for Applied Ethics. Views are his own.

Nick Rogers is the President of the Into the Wild club at Santa Clara University, and his experience with outdoor recreation began at a young age while living in Boulder, Colorado. His self-initiated interest in the outdoors has allowed him to acknowledge the importance of responsible recreation. This knowledge was on display while backpacking in Canyonlands National Park in March 2021. While hiking with two equally well-informed Into the Wild seniors, Nick noticed a family picking up trash after a family hike. The family was not picking up trash as an afterthought; they knew that picking up trash was on the itinerary for their family vacation, and they were fully equipped with trash collection sticks and garbage bags to properly dispose of waste. Nick asked if this was a common practice for this family and they acknowledged that picking up trash was typical whenever they explored a communal ecosystem. Their young children grew up knowing that picking up trash was a given while being outdoors. For Nick, this moment exhibits the importance of embodying an equal stake in the environment, something that Nick seeks to foster in those that share his appreciation for the environment.

Observing this family graciously collect forgotten debris demonstrates that human beings all have an important stake in the environment, and many people embody this responsibility and convey their appreciation for the environment through acts of benevolence. The presence of trash in Canyonlands and many public spaces distracts from extraordinary scenery and demonstrates that the equal environmental interest of human beings is not internalized by all people. While camping in Sequoia National Forest, Nick experienced this unfair treatment of the environment caused by the reactions to the COVID-19 pandemic. In March 2020, Nick was exploring the snow-packed hills outside of Sequoia National Park and found trash bins overflowing with human-driven waste. Government shutdowns caused the closure of National Parks and many State Parks, but the national Forests remained open for those seeking amenity in outdoor recreation. Yet, the usual National Forest workers were not able to work and be stewards for this area, causing the trash bins to overflow. Nick recognized this instance as an unfair treatment of public land, yet those that irresponsibly disposed of their waste did not recognize the impacts of this action. 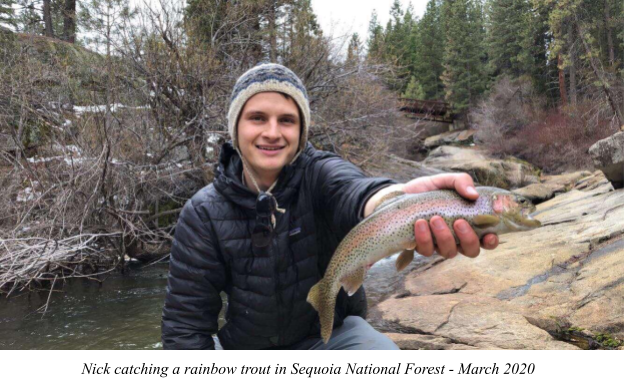 Nick understands that recreating responsibly is entirely necessary for the preservation of environmental spaces, and this knowledge must be prioritized in educational settings. For Nick, the trash thrown around this public space demonstrated a lack of education in the principles of leave no trace (educational link here). Nick educates others in the principles of environmental responsibility and does so in a way that emphasizes inherent responsibility. This understanding of inherent responsibility acknowledges that humans are naturally and innately dependent on the environment. Our dependency on the natural world influences our actions, therefore reinforcing a shared and inherent responsibility for the environment. In my expeditions with Nick, he talks about the regulatory responsibilities that are enforced while recreating outdoors as if these responsibilities are fundamentally human. He packs his waste out, properly deals with fires, plans diligently, and camps on preexisting campgrounds to limit environmental displacement. He does all of this with the understanding that it is humanity’s innate responsibility to be stewards, not because we are required to do so through regulations.